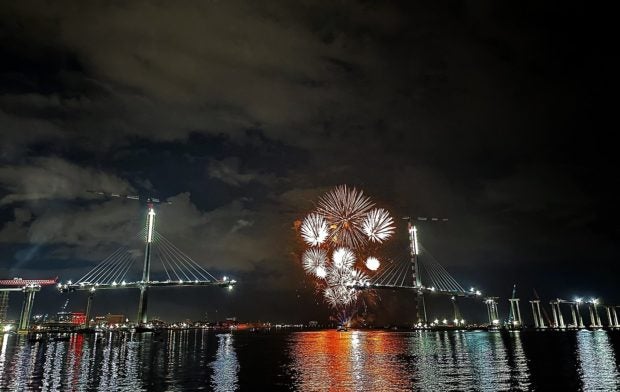 THE CROSSES Eight 40-meter crosses attached to the 140-mtwin pylon towers of the Cebu-Cordova Link Expressway (CCLEX), the still unfinished third bridge linking mainland Cebu to Mactan Island, are lighted in celebration of the 500th anniversary of Christianity in the country on April 15. —PHOTO COURTESY OF CCLEX

CEBU CITY, Cebu, Philippines — The third bridge linking mainland Cebu to Mactan Island was lit on Thursday evening in celebration of the 500th anniversary of Christianity in the country.

Even if it was not yet completed, the Cebu-Cordova Link Expressway (CCLEX), an 8.5-kilometer cable-stayed bridge, switched on the eight 40-meter high crosses attached to the eight 140-m twin pylon towers of the bridge.

Onboard a yacht, Cebu Archbishop Jose Palma led the ceremonial blessing and lighting ceremony of the bridge constructed across Mactan Channel between South Road Properties in Cebu City and Cordova town on Mactan Island.

In a message, Palma described the CCLEX as “a dream of the community.”

“We had a dream to connect Cebu City, Cordova and Lapu-Lapu and now that dream is becoming a reality,” the prelate said.

“The bridge is not just a bridge. The bridge connects and makes people closer together—a beautiful expression of what life should be,” he added.

The CCLEX Corp., a subsidiary of Metro Pacific Tollways Corp. (MPTC), is constructing the bridge at a cost of P30 billion. It is 72 percent complete as of April 16.

The crosses on the pylons can be seen anywhere from the Cebu harbor.

It was completed ahead of the entire bridge in time for the 500th anniversary of Christianity in the country.

The CCLEX was supposed to be completed this year but delays caused by the COVID-19 pandemic, moved the completion date to early next year.

The CCLEX will be the first toll expressway in Cebu and is expected to ease congestion in the first two bridges connecting Mactan Island and mainland Cebu.

The first two bridges are both located between Mandaue City on the mainland and Lapu-Lapu City, the bustling city on Mactan that hosts Mactan Cebu International Airport, the Mactan Export Processing Zone and posh resorts. Gated communities are also found in Cordova, the only other local government on the island.

In a virtual message, MPTC chair Manuel Pangilinan said the crosses served as “beacons of hope and symbols of achievement.”

The 40-m crosses on top of the bridge’s two main pylons were inspired by the Magellan’s Cross, which symbolizes Cebu being the cradle of Christianity in the Far East. INQ