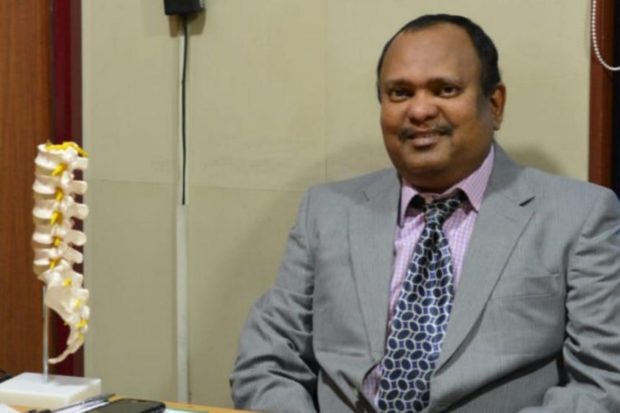 NEW DELHI — It has been almost a year since he died but Dr Simon Hercules is yet to find his final resting place. The Catholic neurosurgeon, who died of Covid-19 in Chennai on April 19 last year, was interred in one of the city’s non-Christian burial grounds.

This happened because an ambulance carrying his body was denied entry at a Christian cemetery that night by a crowd of fearful and angry locals. They believed his burial would spread coronavirus in the neighborhood.

This despite a March 2020 advisory from the World Health Organization stating there was no evidence of any person becoming infected from exposure to bodies of individuals who had died from Covid-19.

Dr Hercules’ body was then taken to the non-Christian burial ground in Velangadu, where it was met with similar opposition. Locals there even attacked the ambulance and those who had brought in his body, injuring them and forcing them to flee.

His body returned with enhanced police protection and was buried hurriedly at Velangadu by his colleagues, without his family in attendance.

Numerous incidents took place in India in the early stage of the pandemic where health workers came under attack from a public fearful of an unknown rampaging virus. They were stoned, spat at and chased away from homes. Some were even abused and ostracized by their neighbors because of their exposure to Covid-19 patients.

Dr Hercules’ family finally got some relief on March 31 when the Madras High Court ordered that his body be exhumed and buried at the cemetery in Kilpauk, where he had first been taken after he died.

His family members are looking forward to closure and giving him a respectable burial in time to mark one year since his passing.

His wife, Ms Anandhi Simon, had petitioned the court after her appeal to the Greater Chennai Corporation (GCC) for a reburial was turned down in April last year and she was told it was not safe to exhume and rebury the body.

The GCC, however, appealed against the March 31 order and the court stayed it this week, adding that the authorities “are required to deal with much more serious issues than this (Dr Hercules’ reburial) during the second wave of the pandemic”.

The case has been adjourned until late July for further submissions.

“We had hoped to give him his last ritual according to our custom but are now disappointed,” Dr Aro Shime Hercules, 28, told The Straits Times. She is Dr Hercules’ daughter and a gynecologist at the New Hope Medical Centre, the hospital her father had set up and led as its director.

She did not attend her father’s burial because she had been infected with the coronavirus as well and was hospitalized but her brother, Aloysius Anton Hercules, 19, was there. He said he was hurt by the way people behaved that night.

“If someone from their family dies, they have to bury them. Why are they doing this to other people?” he said.

Dr K. Pradeep Kumar, a consultant orthopedic surgeon at the New Hope Medical Centre, with two hospital attendants buried Dr Hercules following the attack at Velangadu that left the two ambulance drivers and a health official with grievous head injuries. Others, including the digger operator who had dug the grave, fled after the attack.

“Whatever had to be done, had to be done by us,” said Dr Kumar. Donning PPEs, the three men filled the 2.5m-deep pit using their hands and a single shovel. It was dark and the only light came from the mobile phone flashlights of a few policemen standing some distance away.

“It was no way for a man like Dr Hercules to go. Had things been normal, thousands would have turned up at his funeral,” Dr Kumar added.

Furious at what he had been through, he put down his experience in a Facebook post that same night. “I am writing this with blood as my tears,” the post began. It was a desperate plea asking people not to discriminate against doctors.

“Do we really deserve this? Don’t you think this can happen to any of us? What will happen if all the doctors close their doors? Where will you go for treatment?… Humanity is dead and it needs resuscitation,” he added in the post that went viral, drawing public attention to what happened after Dr Hercules died.

A report by Insecurity Insight last month recorded 1,172 attacks and threats against health workers, facilities and transport globally in 2020. Of these, 412 were directly related to Covid-19. India saw 128 such incidents last year, topping that list.

Days after Dr Hercules’ death, the Indian government approved an ordinance making violence against healthcare personnel a non-bailable offense with a maximum punishment of seven years’ imprisonment and a fine of 500,000 rupees (S$9,000). Nearly a year on, attitudes have improved significantly with better awareness about the virus.

“People have realized everybody is vulnerable. Those who opposed Dr Hercules’ burial have also understood the situation is serious and that what they did was wrong,” Dr Kumar said, adding that it remains important for the government to ensure factual information about the pandemic is disseminated in time to avoid unexpected public behavior.

Amid an ongoing vicious surge in Covid-19 infections, Dr Aro Shime Hercules said the challenge now is to get patients at her hospital to wear masks and maintain physical distance.

“People are least bothered. Maybe the fear of the coronavirus has gone, even though cases are rising,” she added.