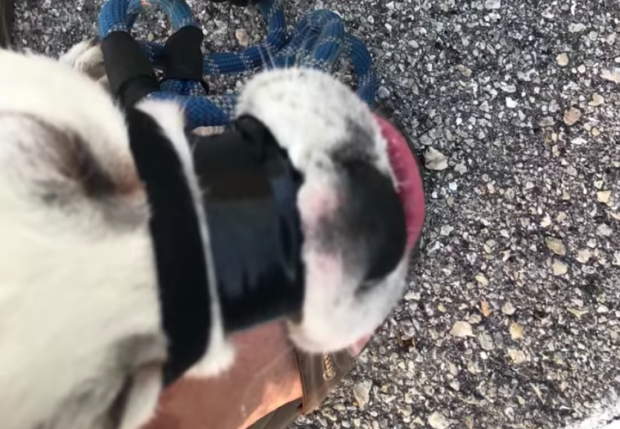 Two suspects were put behind bars in Florida after authorities found a puppy inside an abandoned car with its mouth taped shut.

Local police responded to a call about a puppy in distress inside an abandoned vehicle. It was hanging out of a window with its mouth taped shut, a release by the Lee County Sheriff’s Office on Facebook stated last Thursday, April 14.

When police found the car, they also found another dog inside the vehicle. It was discovered that both puppies were left alone without any food or water.

TWO ARRESTED FOR TAPING A DOG’S MOUTH SHUT, ABANDONING A SECOND Wednesday, April 14th, 2021“It disgusts me that an innocent puppy was left alone in a vehicle, unable to eat, breathe, or drink,” stated Sheriff Carmine Marceno. “This type of behavior will not be tolerated in Lee County.”Yesterday evening, deputies responded to a call of a puppy inside of a vehicle in distress, halfway hanging out of a window, with his mouth taped shut.While on scene, deputies located the puppy in a Blue Hyundai SUV in the parking lot of Walmart on S. Tamiami Trail in Estero, Florida. There was also another dog located inside of the vehicle. Deputies quickly made contact with the suspects and dogs’ owners, later identified as Jaelen Anthony Barge (DOB 12/30/00) and Allison Marie Sweck (DOB 12/20/2002). Deputies discovered the suspects taped and tightly wrapped a training lead around the puppy’s snout to prevent the puppy from nipping them. Due to the nature of the crime, detectives from our South District Criminal Investigations Division and Animal Cruelty Task Force assumed the investigation. While investigating, detectives learned the proper use of the training lead the suspects utilized is to provide gentle control to help keep a dog from pulling during walks, not to be used as a muzzle.It was also discovered the puppies were left alone without accessible food or water. “It is unbelievable something so senseless could occur,” stated Sheriff Carmine Marceno. “I am proud to say due to the hard work of our detectives, these heartless criminals are behind bars where they belong.”Both Barge and Sweck were arrested and booked at the Lee County Jail, charged with one count each of Aggravated Animal Cruelty and one count of Animal Cruelty. We are also happy to report that the puppy with its mouth taped shut, a 9-week-old Great Pyrenees, is now safe and recovering at the Lee County Domestic Animal Services.

The dogs’ owners were identified as Jaelen Anthony Barge, 20, and Allison Marie Sweck, 18. The puppy’s snout also had a training leash wrapped tightly around it, aside from the tape. The owners said they put the leash on the animal’s mouth to prevent it from nipping them.

“These sick individuals have no regard for life, no matter what life it is — in this case, the poor little puppy’s life,” sheriff Carmine Marceno stated in a video accompanying the release.

“It disgusts me that an innocent puppy was left alone in a vehicle, unable to eat, breathe, or drink,” he added.

The puppy with its mouth taped shut, which deputies called Phoenix, is now safe and recovering at the local animal service. JB

Read Next
Breaking the ice at Hokkaido’s Lake Akan
EDITORS' PICK
Kai Sotto continues to inspire Filipinos by sharing his passions and stories with Smart Prepaid
1Sambayan to nominees: Stick to word of honor
EDITORIAL: Good news, bad news
Alex Eala wins Grand Slam on Independence Day: ‘I hope I made my contribution to the country’
Trust Robredo’s political instincts – Kaya Natin! convener
Ahead of ONE: Full Blast II, Mongkolpetch warns Elias Mahmoudi: ‘Watch out for my fists’
MOST READ
Duterte, Mayor Sara unlikely to run under same slate in 2022, says Lacson
PH to have cloudy, rainy Monday — Pagasa
1Sambayan to nominees: Stick to word of honor
China cautions G7: ‘small’ groups don’t rule the world
Don't miss out on the latest news and information.