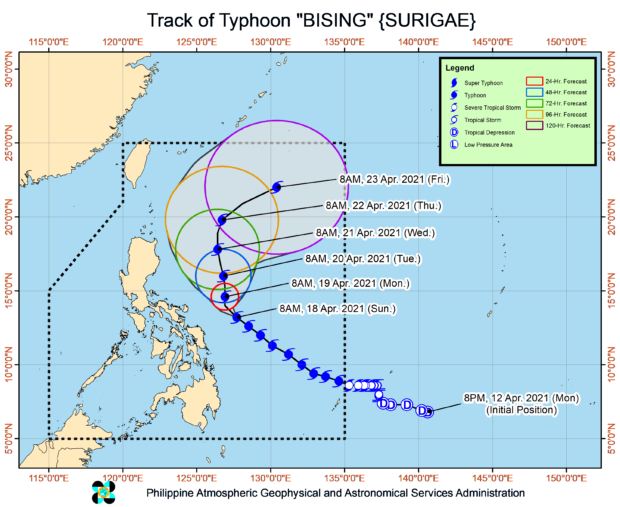 Cua said families near the shorelines, riverbanks and landslide-prone areas were advised to evacuate to safer zones.

Local officials in the island province are on full “red alert” status in preparation for the typhoon which, based on the 5 a.m. severe weather bulletin of Philippine Atmospheric, Geophysical and Astronomical Services Administration (Pagasa), was located based on all available data at 400 kilometers East of Catarman, Northern Samar or 470 kilometers East of Juban, Sorsogon.

“We have already alerted the villagers to get ready for possible pre-emptive evacuation for their safety,” Cua said in a phone interview.

He said they are closely monitoring the forecast and direction of typhoon but have already advised all the LGU’s to pre-position relief packs for evacuated families.

Juan Pantino Jr., officer-in-charge of Pagasa in Catanduanes, said they are expecting a bad weather condition starting Sunday night as Bising is expected to be at 295 kilometers Northeast of Virac town.

Pantino said based on the available data, Bising is not likely to make landfall, but the province is inside the cone of probability which means that there is a chance for Bising to affect the area.

He said the towns facing the Eastern part of the province including towns of Pandan, Gigmoto, Bagamanoc, Viga and Baras will likely experience heavy rains and strong winds.

In Bagamanoc town, David Villacorta, head of Municipal Disaster Risk Reduction and Management Office, said they are expecting to complete the evacuation of more than 100 families before 3 p.m.

“These families living near the shoreline are vulnerable to storm surge because our town is facing the Pacific Ocean,” he said.

Cua said “evacuation centers are already identified” which includes the provincial capitol that will be used as temporary shelter and can house 500 individuals.

The governor said the residents of the province are still reeling from the effects of Super Typhoon Rolly (Goni) which hit Bicol late October 2020.

“We are still on recovery stage, particularly the abaca plantations (here). Hope Catanduanes and the Bicol region will be spared from Bising,” Cua said.