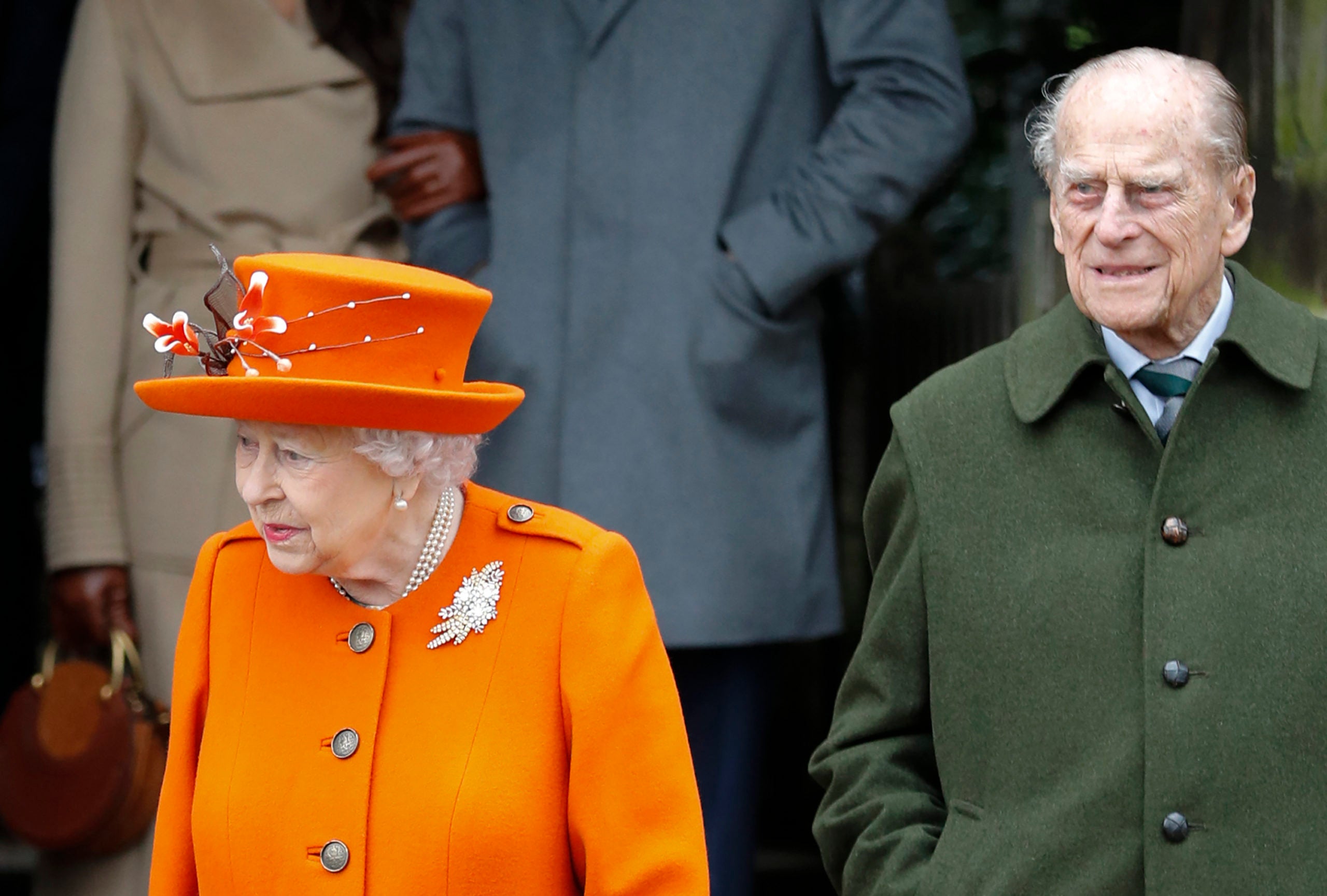 Queen Elizabeth II bids a final farewell to her late husband Prince Philip on Saturday, at a funeral restricted by coronavirus rules but reflecting his long life of military and public service.

The ceremony with just 30 mourners behind the stately walls of Windsor Castle, west of London, will be watched by an expected television audience of millions, with the public urged to stay away because of the pandemic.

But crowds were still expected to turn out in Windsor, prompting barriers to be erected along the sweeping Long Walk to the castle gates patrolled by uniformed police.

Ieuan Jones, 37, traveled to the town from his home in the Welsh capital, Cardiff, to pay his respects, calling Philip “a strong man, a true hero (who) did so much for this country and the royal family”.

“It’s really a shame that because of the pandemic we can’t pay a wider tribute to the exceptional man he was,” he told AFP.

“I love the royals. I think they’re amazing… It’s sad because in time, all this will change,” the 57-year-old said.

Ceremonies were held in Sweden and Denmark, while birds from the Royal Pigeon Racing Association were released from the National Memorial Arboretum in central England.

The Duke of Edinburgh — described by royals as “the grandfather of the nation” — died on April 9, aged 99, just weeks after being released following a month-long stay in hospital for treatment of a heart condition and an infection. 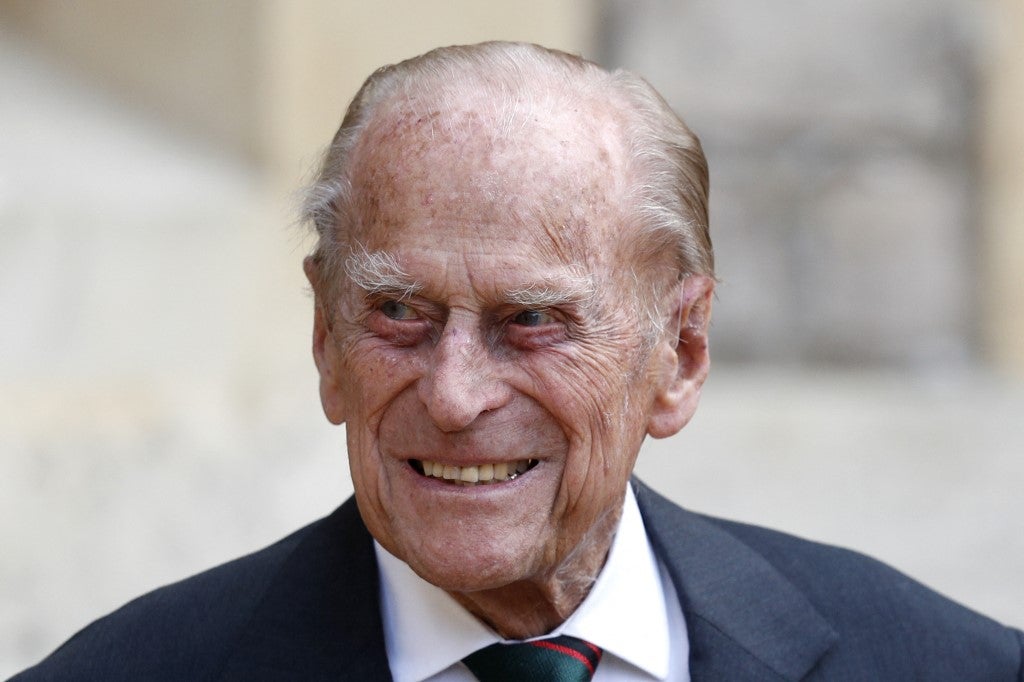 (FILES) In this file photo taken on July 22, 2020 Britain’s Prince Philip (C), Duke of Edinburgh takes part in the transfer of the Colonel-in-Chief of The Rifles at Windsor castle in Windsor on July 22, 2020. – Queen Elizabeth II’s husband Britain’s Prince Philip, Duke of Edinburgh has died, Buckingham Palace announced on April 9, 2021. (Photo by Adrian DENNIS / POOL / AFP)

Britain’s longest-serving royal consort was an almost constant presence at the Queen’s side during her record-breaking reign that began in 1952 as Britain rebuilt from World War II and as its global empire began to unravel.

His death, after 73 years of marriage, has left a “huge void” in her life, the couple’s second son, Prince Andrew, said last weekend.

The Queen released a touching personal photograph of herself with Prince Philip, both looking relaxed and smiling in the Cairngorms National Park in Scotland in 2003.

Images of key moments in the couple’s marriage were also shared on the royal family’s social media accounts, as most newspapers reflected on her deep personal loss.

At the service, the Dean of Windsor, David Conner, will pay tribute to Philip’s “unwavering loyalty” to his wife, who turns 95 next week, the country and the Commonwealth, as well as his “courage, fortitude and faith”.

But the stripped-back ceremonial funeral will still feature members of the armed services he was associated with lining a short procession route through the immaculately trimmed grounds of the castle, whose history dates back 1,000 years.

At 11:00 am (1000 GMT), a military bearer party moved his coffin from the castle’s private chapel in preparation for it to be taken to St George’s Chapel at 2:45 pm on a bespoke Land Rover hearse which Philip designed himself.

A minute’s silence will be observed across the country on the stroke of 3:00 pm before the funeral service begins.

End of an era 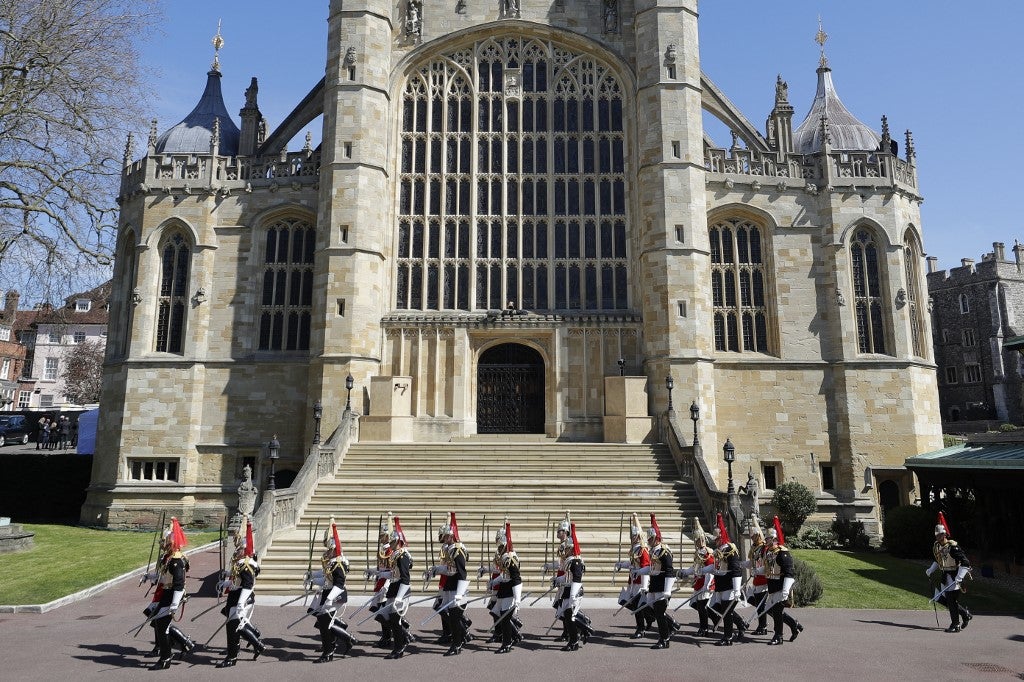 Members of the Household Cavalry march past St George’s Chapel before for the funeral service of Britain’s Prince Philip, Duke of Edinburgh in Windsor Castle in Windsor, west of London, on April 17, 2021. – Philip, who was married to Queen Elizabeth II for 73 years, died on April 9 aged 99 just weeks after a month-long stay in hospital for treatment to a heart condition and an infection. (Photo by Kirsty Wigglesworth / POOL / AFP)

The Queen will lead mourners, as they pay their respects to the man she once called her “strength and stay”, and whose death closes a remarkable chapter for Britain’s most famous family.

The congregation will mostly be close family, including the couple’s four children: heir to the throne Prince Charles, 72, Princess Anne, 70, Prince Andrew, 61, and Prince Edward, 57.

Also present will be Charles’ eldest son William, 38, who will be joined by younger brother, Harry, 36, after he jetted back last weekend from the United States, where he now lives.

All eyes will be on the brothers — whose mother was Charles’ first wife, Princess Diana — after a reported falling out over Harry’s move to California with his American wife, Meghan, and their stinging criticisms of the royals.

Meghan, pregnant with her second child, was advised not to travel on medical grounds. Harry has had to quarantine since arriving from Los Angeles.

The brothers, who as young boys walked behind their mother’s coffin at her funeral in 1997, will follow the procession on foot, but not side-by-side.

Between them will be their cousin, Princess Anne’s son Peter Phillips, 43, which will likely fuel further rumors of the rift, even if it reflects royal protocol.

Funerals of senior royals are normally grand public affairs, honed over years of planning, combining pomp, pageantry, and a guest list that is a who’s who of world dignitaries.

The last major royal funeral — of the Queen’s mother, also called Queen Elizabeth — in 2002 cost more than £5.4 million ($7.4 million) and saw more than one million people throng outside Westminster Abbey in central London.

Saturday’s ceremony will be a more modest affair but a royal send-off like no other, with two-meter social distancing in place inside the 15th century Gothic chapel.

All guests — in mourning black — are required to wear black face masks before, during and after the ceremony.

The slimmed-down formalities, however, may have appealed to the straight-talking prince, who had an aversion to “fuss”, according to his family.

The duke will be interred in the Royal Vault of St George’s Chapel.

When the Queen dies, he will be transferred to lie alongside her in the King George VI memorial chapel, which houses the remains of her father, George VI, her mother, and the ashes of her younger sister, Princess Margaret.