As of April 13, the Department of Health (DOH) and the National Task Force Against COVID-19 reported that 1,255,716 doses have been administered nationwide.

This translates to 0.99 percent of the country’s estimated 110 million population having at least one shot of a COVID-19 vaccine and 0.15 percent who have received two doses.

Among the eligible population, or Filipinos 18 years old and above, the percentage of those who have received at least one dose is 1.54 percent, while those with two doses is 0.23 percent.

In Metro Manila, which accounts for about 44 percent of the country’s total COVID-19 cases, 3 percent of the total population have received at least one shot.

Currently, vaccines being administered in 2,988 sites across the country are either CoronaVac or AstraZeneca.

Health-care workers, who are on top of the government’s priority list, were the first to receive the COVID-19 vaccines, while some local governments have begun giving shots to senior citizens and persons with comorbidities this month. Registration for free vaccination can be done at the local government level.

The Philippines launched its COVID-19 vaccination campaign on March 1. To achieve herd immunity, which experts say happens when a substantial number of people in a community becomes immune to an infectious disease, the government aims to vaccinate 70 million Filipinos this year, or 63 percent of the national population.

Due to delays in procurement, the Philippines began its immunization program late compared with its neighbors in Southeast Asia.

As of April 13, the country has received 3,025,600 doses of COVID-19 vaccines and about 40 percent of the total have already been administered.

The first batch of vaccines—600,000 doses of CoronaVac donated by the Chinese government—arrived on Feb. 28.

This was followed by 525,600 doses of AstraZeneca obtained via the COVAX facility, a globally pooled procurement mechanism to ensure equitable access to COVID-19 vaccines.

Three more batches of CoronaVac vaccines, with a total of 1.9 million doses, arrived in the country between March 24 and April 11.

The government earlier said its target was to acquire 170 million doses of COVID-19 vaccines from several suppliers, enough to inoculate up to 70 million Filipinos this year.

It expects the arrival of 2 million vaccines from Russia and China this month. 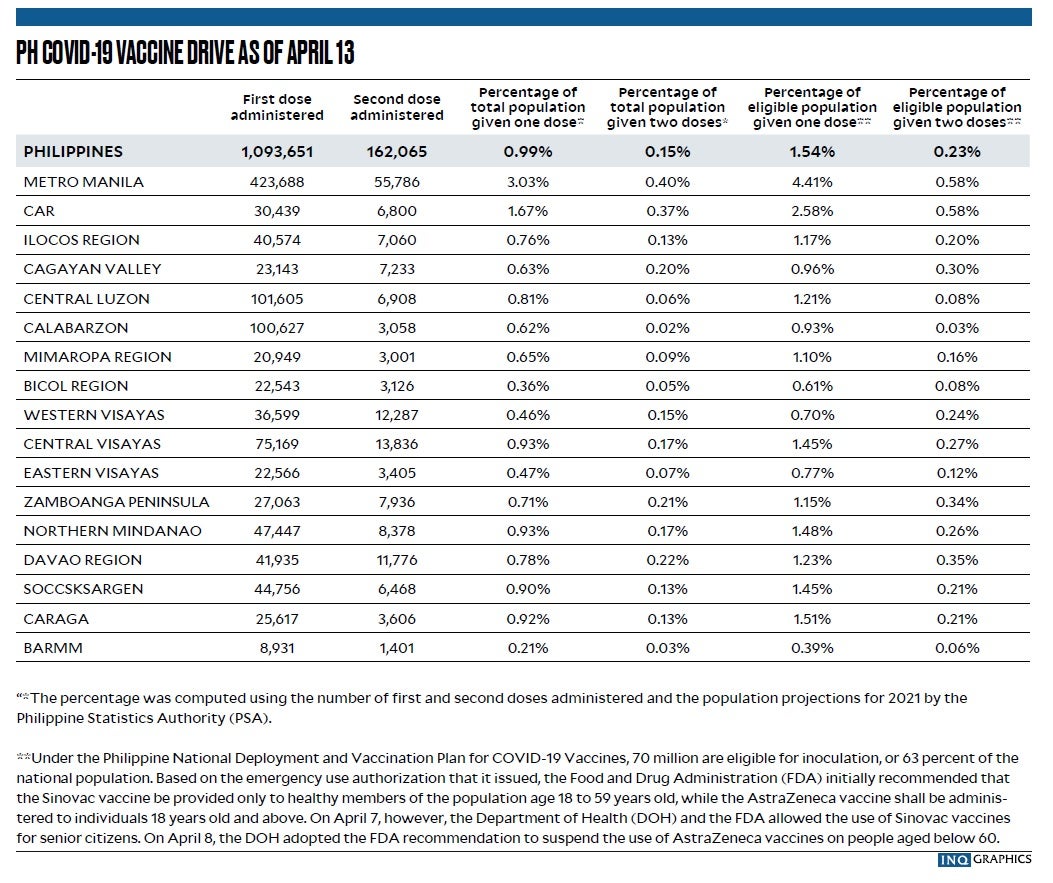 UPDATE: Duterte backs out, taps Roque to face-off with Carpio

How did she do it? The woman who made the Chinese ships to flee

Duterte vs Carpio, Del Rosario: From debate dare to threat of hanging