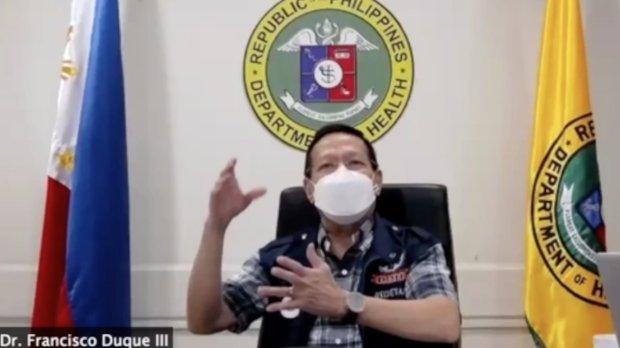 Health Secretary Francisco Duque III said there was not enough data to show how long the COVID-19 vaccines being used in the country and abroad could continue providing protection against the coronavirus.

Duque spoke at a House hearing on the progress of the government’s national vaccination program where the lawmakers asked about the “validity” of the vaccines made by AstraZeneca of the United Kingdom and Sinovac Biotech of China which are currently being used for mass inoculations in the country.

He said initial data showed that the vaccines, in general, offered protection for about “six to nine months.” He assured the lawmakers that the Department of Health (DOH) was up-to-date on antibody protection levels afforded by the different vaccines.

“Whether we need to adopt a booster dose policy, that remains to be seen because we still don’t have sufficient data precisely to establish how long these vaccines can provide protection,” Duque said.

Because these were new, he said the manufacturers and research scientists were cooperating in monitoring the level of antibody protection given by AstraZeneca, Sinovac and the other vaccines made by Moderna, Pfizer-BioNTech, Gamaleya, Novovax, and Johnson and Johnson.

“Not all vaccines are created equal, so each one has to really monitor, consolidate the data and pursue further studies to see the antibody levels in persons who have been vaccinated by any of the seven vaccines,” Duque said.

The first doses of the Sinovac vaccine, CoronaVac, were donated by China and the first shot was administered by Duque himself on March 1 on Dr. Eileen Aniceto, manager of the Emergency Medicine and Outpatient Department of the Lung Center of the Philippines.

The first AstraZeneca jab was received by Dr. Olga Virtusio, the head of the Parañaque City Health Office, on March 7 at Ospital ng Parañaque.

At present, the country uses the Sinovac vaccines for people 18 years old and above.

AstraZeneca shots were temporarily halted for those age 59 and below because of reports of rare blood clots developing in some people who received the vaccine in other countries.

Pfizer and Moderna said clinical trials showed that their vaccines would give an above 90-percent protection against coronavirus infection for six months after the second dose.

Both vaccine makers are considering a third booster shot or a regular booster shot to sustain protection against COVID-19.

No to mixing brands

A top disease control official in China said the efficacy of its COVID-19 vaccines, including CoronaVac, was low and didn’t have high rates of protection, and that China was considering mixing vaccine brands to boost efficacy.

Duque disagreed with using different brands for the first and second doses.

“I do not advocate for this as of yet. There is no sufficient data to force the claim that a mixed vaccine policy works,” he said, pointing out that it would be difficult to identify the cause of any adverse side effect if two different vaccine brands were used.

Due to low supplies of COVID-19 vaccines and uncertainty in delivery dates, the government’s vaccine expert panel has begun studying the possibility of using two different brands to inoculate a person against COVID-19.Other nations are studying this possibility to see if vaccine efficacy and protection will improve.

“Unless science comes forward with convincing evidence and data to show, for example, that Pfizer and Moderna vaccines which both use the mRNA platform can be used, then maybe it’s possible,” Duque said.

The country has received 2.5 million doses of CoronaVac, 1 million of which were donated, and 525,600 AstraZeneca shots from the COVAX facility.

The deaths and recoveries left 193,476 active cases, the highest ever recorded since the beginning of the pandemic. Of the total active cases, 96 percent are mild, 2.9 percent asymptomatic, 0.5 percent severe, 0.4 percent critical and 0.3 percent moderate.

The DOH reported that 68 percent of total intensive care unit beds in the country were in use, but it was 84 percent in the National Capital Region. It said 48 percent of mechanical ventilators were in use but in Metro Manila it was 64 percent. The health department removed 40 duplicate cases from the daily case bulletin, while another 39 cases previously marked as recoveries were reclassified as deaths, after validation.