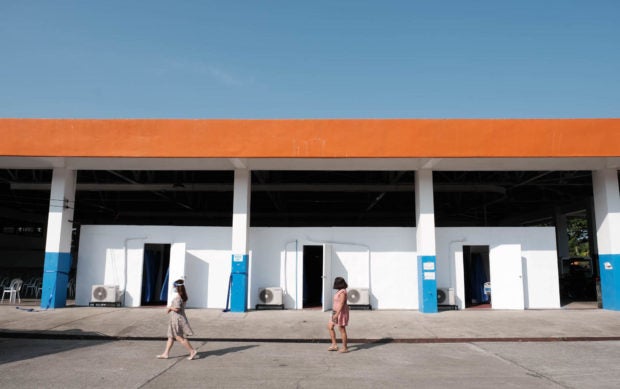 The Ilocos Norte provincial government and the Department of Public Works and Highways opened another isolation facility in Laoag City which raised the total number of COVID-19 beds to 141. PHOTO FROM ILOCOS NORTE LGU

LAOAG CITY—The provincial government has built another facility for mild COVID-19 cases in a bid to ease the load of local hospitals that are being overwhelmed by a surge in severe cases of the disease, authorities said on Thursday (April 15).

A health task force in Ilocos Norte has been conducting a “more aggressive method of tracing and containment” after several outbreaks had recently hit at least two cities and one town in the province.

On Tuesday (April 13), the provincial government and the Department of Public Works and Highways in Ilocos Norte opened another isolation facility in the city, raising the total number of COVID-19 beds to 141.

The city government also turned an evacuation site at the village of Cabungaan into an isolation facility that could house 18 COVID-19 patients.

Dr. Rina Corpuz, provincial health consultant, said while several towns and cities in the province have their own isolation facilities, they were almost filled to the brim with patients.

On April 11, at least 32 people with moderate to severe COVID-19 cases were admitted to Mariano Marcos Memorial Hospital and Medical Center (MMMH&MC) in Batac City for treatment.

The hospital was assigned by the Department of Health only at least 27 beds dedicated to COVID-19 patients.

Dra. Maria Lourdes Otayza, MMMH&MC chief, appealed to the public for understanding as the hospital would dedicate most of its beds for the treatment of critically-ill patients with COVID-19.

While on the brink of being overwhelmed, the hospital asked on Thursday for donations of medical equipment, like pulse oximeter, thermal scanner, stethoscope, oxygen carrier and stand, digital BP apparatus and transport stretcher.

Otayza said that the recent donation drive by the hospital was its “coping mechanism” amid the sudden surge of COVID-19 cases in the province.

“The hospital is here to serve, but we are all responsible that the hospital would be able to serve us,” she said.

On April 15, the province had logged a total of 1,390 COVID-19 cases, of which 268 remain active, according to the provincial government.