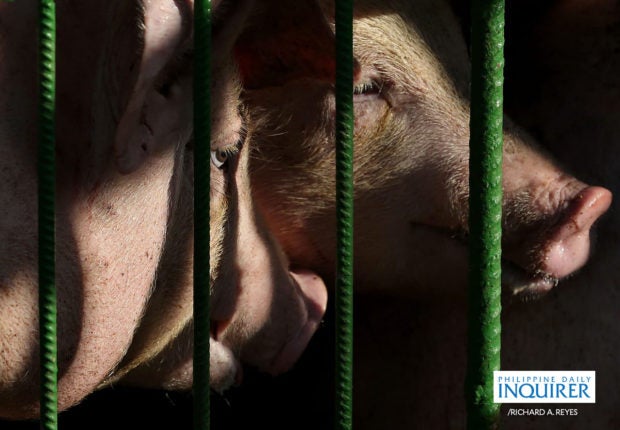 Around 2,000 live hogs from South Cotabato, Mindanao region arrive in Vitas port, Tondo, Manila on February 17, 2021 to augment the pork supply amid shortage and high prices in the National Capital Region. RICHARD A. REYES / INQUIRER

Sotto noted that there has been an African swine fever (ASF) outbreak since 2018 and this should not be used an excuse to reduce the tariff rates and raise the MAV for pork imports.

(What’s mind-boggling is the [ASF outbreak] has been there since 2018, right? Why would they, when there’s going to be an election, suddenly want to raise the minimum access volume then lower the tariffs, the tax?)

Asked why he was linking the reduced import tariffs and raising import volumes to the upcoming elections, the Senate leader said: “Aba’y may gustong kumita eh. Hindi ba obvious?”

If there is indeed shortage of pork in Luzon, Sotto questioned why the country had to look farther for imported pork when there is “over supply” in the Visayas and Mindanao regions.

(There’s oversupply that’s why I’m asking which is more expensive — to import from Belgium, or import pork from Mindanao and Visayas)

Sotto could not help but questioned the timing of raising the government’s move.

The Senate Committee of the Whole has already adopted a resolution urging President Rodrigo Duterte to recall his order lowering the tariffs on pork imports as well as his proposal to raise the MAV    by 350,000 metric tons from the current 54,000 MT.