Hong Kong tycoon Jimmy Lai, others to be sentenced for illegal assembly 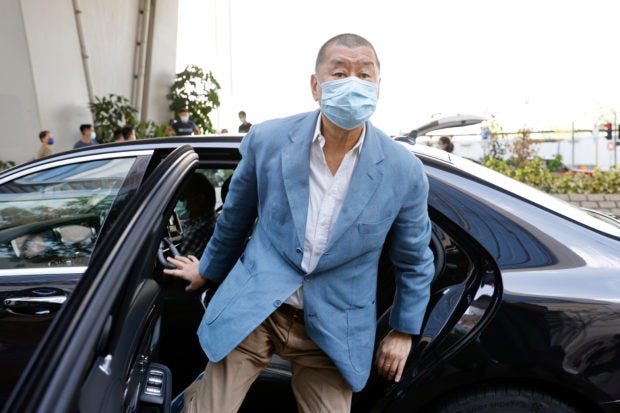 HONG KONG — Hong Kong media tycoon Jimmy Lai and nine other pro-democracy activists are expected to be sentenced on Friday after they were found guilty of participating in unauthorized assemblies during anti-government protests in 2019.

It would be the first time that Lai, one of Hong Kong’s most prominent democratic activists, who has been in jail since December after being denied bail in a separate national security trial, will receive a sentence.

About 100 people, including foreign diplomats, queued outside the court early on Friday to get a seat for the hearing.

Lai was found guilty in two separate trials earlier in April for illegal assemblies on August 18 and August 31, 2019, respectively. The maximum possible punishment is five years in prison.

His repeated arrests have drawn criticism from Western governments and international rights groups, who raised concerns over waning freedoms in the global financial hub, including freedom of speech and assembly.

In the Aug. 18 case, District Court Judge Amanda Woodcock found him guilty together with Martin Lee, who helped launch the city’s largest opposition Democratic Party in the 1990s and is often called the former British colony’s “father of democracy.”

As he entered the court on Friday, Lee said: “I feel completely relaxed, I’m ready to face my sentence.”

In her mitigation speech, Ng said the law must not only be defended in courts or the legislature, but also in the streets.

“When the people, in the last resort, had to give collective expression to their anguish and urge the government to respond, protected only by their expectation that the government will respect their rights, I must be prepared to stand with them, stand by them and stand up for them,” she said.

In the second trial, the same judge found Lai and Lee Cheuk-yan guilty together with Yeung Sum. The Aug. 31 clashes were some of Hong Kong’s worst, with police firing tear gas and water cannons at pro-democracy protesters who threw petrol bombs.

All three had pleaded guilty.

Lee Cheuk-yan posted on Facebook late on Thursday that he expected to go to jail but that his mind was “free as the ocean and the sky.”

The 2019 pro-democracy protests were spurred by Beijing’s tightening squeeze on wide-ranging freedoms promised to Hong Kong upon its return to Chinese rule in 1997, and plunged the semi-autonomous city into its biggest crisis since the handover.

Beijing has since consolidated its authoritarian grip on Hong Kong by imposing a sweeping national security law, punishing anything it deems as secession, subversion, terrorism or collusion with foreign forces with up to life in prison.

Supporters of the law say it has restored stability.

Lai, founder of the Apple Daily tabloid, has been a frequent visitor to Washington, meeting officials such as former Secretary of State Mike Pompeo, to rally support for Hong Kong democracy, prompting Beijing to label him a “traitor”.

Lai is scheduled for two more court mentions on Friday, in the ongoing trial where he is charged with collusion with a foreign country and a fraud case related to the lease of the building which houses Apple Daily.

Earlier this week, the tabloid published a hand-written letter Lai sent to his colleagues from prison, saying: “It is our responsibility as journalists to seek justice. As long as we are not blinded by unjust temptations, as long as we do not let evil get its way through us, we are fulfilling our responsibility.”

It is “time for us to stand tall,” he wrote.