No uniforms for royals at Prince Philip’s funeral—media 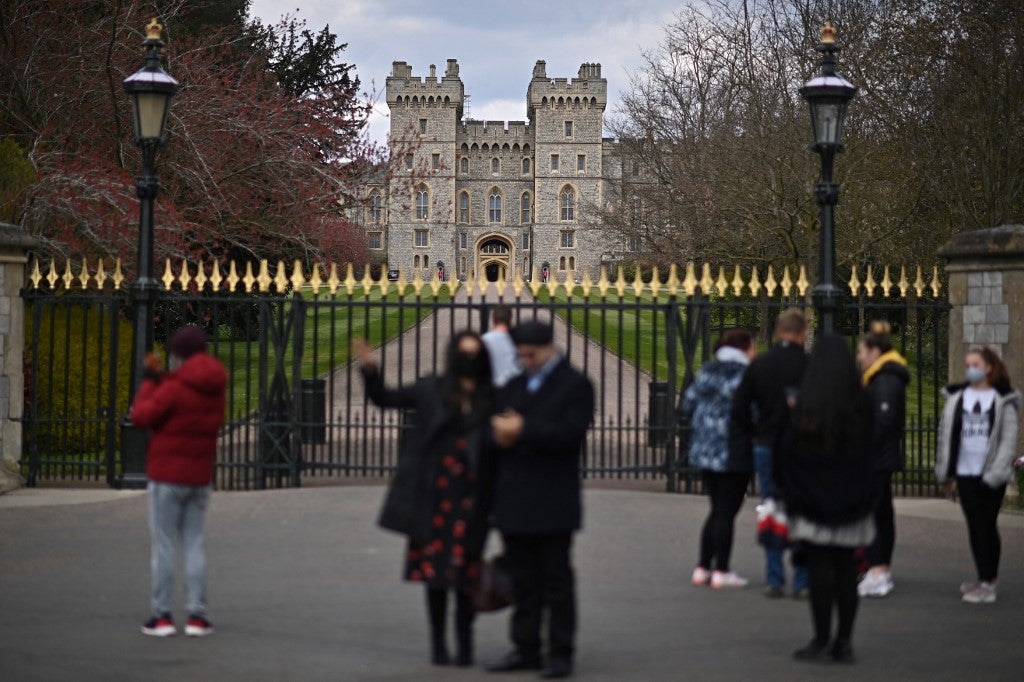 Members of the public look at Windsor Castle in Windsor, west of London, on April 14, 2021, following the April 9 death of Britain’s Prince Philip, Duke of Edinburgh, at the age of 99. – Prince Philip’s funeral will take place at St George’s Chapel, Windsor Castle on Saturday, April 17. (Photo by Ben STANSALL / AFP)

LONDON — The British royals are all to wear civilian clothing at Prince Philip’s funeral to avoid awkwardness over which princes are entitled to military uniform, British media reported Thursday.

The Duke of Edinburgh, who died last Friday, will be buried on Saturday at Windsor Castle, west of London, with just 30 mourners, most of them close family.

Queen Elizabeth II is understood to have decided that all the royals will wear civilian clothing, The Sun tabloid and other media reported.

Harry, the Duke of Sussex, was stripped of his military titles after stepping away from senior royal duties and moving to California with his wife, Meghan.

While Harry — the Queen’s grandson — did two tours of duty in Afghanistan, he is only allowed to wear a suit with service medals.

Another potential row comes in the shape of the monarch’s second son Prince Andrew, a former Royal Navy helicopter pilot who saw action in the 1982 Falklands War.

He has been sidelined from public duties because of outrage at his defense of his friendship with the convicted sex offender Jeffrey Epstein.

He was set to take the honorary rank of admiral for his 60th birthday but the appointment was put on hold.

The Sun said there would have been “serious displeasure” in the Navy had he gone ahead with the uniform plan.

The Daily Telegraph reported that royals had held “intense discussions” to allay concerns about embarrassing the family if Andrew and Harry — the only royals to have seen frontline service — were not wearing uniform.

The broadsheet reported that the decision ultimately lay with the Queen, while The Sun cited insiders as saying she “personally stepped in” to suggest the civilian clothing rule.

The decision would see the royal family present a united front, at least sartorially, while the funeral will have a strong military element due to Prince Philip’s past as a naval commander.

Harry’s appearance at the funeral will be the first time he has been seen in public with the royals since he and Meghan gave an explosive television interview broadcast last month accusing unnamed royals of racism.

Read Next
English diners rush back to restaurants as lockdown eases
EDITORS' PICK
Geek out at TOYCON 2022 powered by Smart Signature
Unemployment rate up to 6% in May
Bye bye Boris: UK PM Johnson bows out with regrets but no apologies
House energy committee chair Arroyo bats for cheap electricity
High inflation: Your P1 is now worth only 87 centavos
High-risk pregnancy: Reducing your risk is in your hands
MOST READ
Suspect in grisly killing of missing woman in Bulacan arrested
Kim Atienza’s daughter flaunts bikini body in response to critics of her ‘revealing photos’
Bongbong Marcos’ first order: Abolish PACC, Office of Cabinet Secretary
Ex-Defense chief Lorenzana is the new BCDA chair
Don't miss out on the latest news and information.