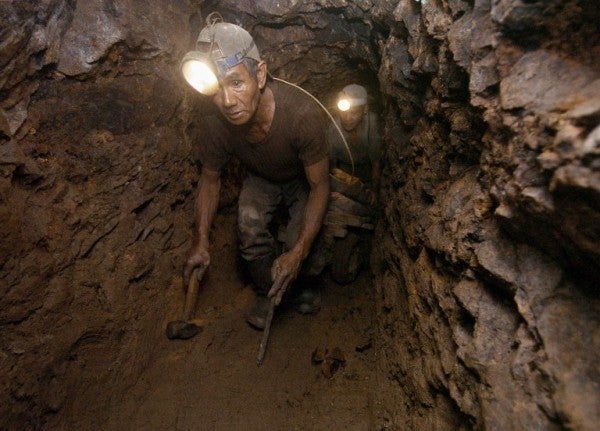 FILE PHOTO: This photo taken on March 26, 2006, shows workers walking through a mine tunnel in Itogon north of Manila. The Philippines said on July 9, 2012, it would not approve new mining permits until Congress passes a bill increasing royalties on the industry as part of new rules governing the sector. AFP PHOTO/Joel NITO

MANILA, Philippines — President Rodrigo Duterte has allowed the government to enter into new mineral agreements, provided that these would comply with the country’s mining laws.

In his Executive Order (EO) No. 130 signed April 14 and made public Thursday, Duterte lifted the moratorium on new mining agreements imposed by former President Benigno S. Aquino III in 2012.

“The Government may enter into new mineral agreements, subject to compliance with the Philippine Mining Act of 1995 and other applicable laws, rules, and regulations,” EO No. 130 stated.

“[T]he mining industry can support various government projects such as the Build, Build, Build Program by providing raw materials for the construction and development of other countries; and the Balik Probinsya, Bagong Pag-asa Program, by increasing employment opportunities in remote rural areas where there are mining activities thereby stimulating countryside development,” the EO said.

Under the EO, the Department of Environment and Natural Resources (DENR) is tasked to formulate terms and conditions in the new mineral agreements and “strictly implement” mines safety and environmental policies.