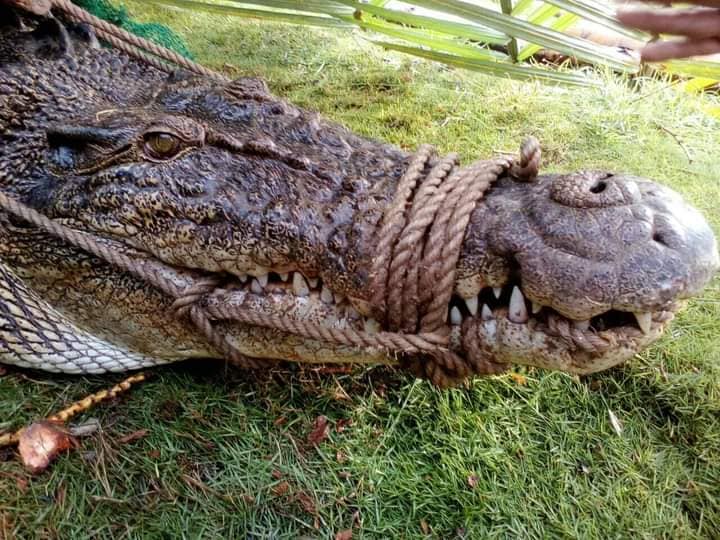 The saltwater crocodile caught in a riverside community of Bislig City in Surigao del Sur on Tuesday (April 13). PHOTOS BY RENALYN BEDIA CORDOVA

BUTUAN CITY—Residents of Bislig City in Surigao del Sur province on Tuesday (April 13) rescued an 11-foot long saltwater crocodile trapped in a net in Bislig River, which is not known to be the animal’s natural habitat.

The saltwater crocodile (Crocodylus porosus) was trapped in a net in a fishpond in the small riverside community of Pamanlinan.

According to Nathaniel E. Racho, officer-in-charge of the Community Environment and Natural Resources Office (Cenro) in Bislig, residents tipped his office off about the crocodile on Monday (April 12).

Racho said his office was still checking if this was the same crocodile sighted in other parts of Bislig River starting in 2018.

“There had been other reports of a large and a small crocodile,” said Racho. “We have to verify this because this might just be one crocodile,” he said..

Since the crocodile sightings were reported to the Cenro, Racho said there had been pressure from the people to have the reptile removed from the river which prompted the agency to educate the community about the animal to prevent any unauthorized capture.

Rainier Manalo, program head for crocodile research and conservation of the Crocodylus Porosus Philippines Inc., said the group had documented an approximately 10-foot long saltwater crocodile in waters off the old pier of the Paper Industries Corp. of the Philippines (Picop) in Bislig in 2018.

By 2019, the group received reports that the crocodile had transferred to the Bislig River.

“We have yet to confirm through a proper scientific survey if there are others in the area especially along the river,” said Manalo.

Manalo said Bislig was among the areas not previously known to have saltwater crocodiles.

Lorelei Teresa Lim, tourism operations officer of Bislig, said sightings of crocodiles in the city have been “a common occurrence” in the 1960s.

“We are just quite amazed that they just, all of a sudden, showed up again after more than four decades,” said Lim.

Manalo said it was possible that habitat loss was behind the return of the crocodiles.

“In most cases, it might be the result of human encroachment into crocodile habitats,” he said.

“We really have crocodiles in the wild especially here in Mindanao, and with more people in their territory, these reptiles are forced to search for new areas, and new hunting grounds,” he said.

Read Next
Courts in NCR Plus bubble, other MECQ areas to remain physically closed
EDITORS' PICK
Irving out of game five clash with Bucks — Nets
US welcomes Duterte’s decision to hold off VFA termination for 3rd time
Ahead of ONE: Full Blast II, Mongkolpetch warns Elias Mahmoudi: ‘Watch out for my fists’
Synology NAS: A photo storage and multimedia server for your home
Alex Eala wins Grand Slam on Independence Day: ‘I hope I made my contribution to the country’
‘Magre-recalibrate tayo:’ Duterte directs more vaccines to areas with high COVID cases
MOST READ
‘Hindi pwedeng take 2,’ Sotto tells presidential, VP aspirants
Tighter curbs sought in provincial COVID-19 hot spots
Not even found in Tiktik: Another bad word snuck into DepEd materials
NCR Plus remains under GCQ from June 16-30
Don't miss out on the latest news and information.