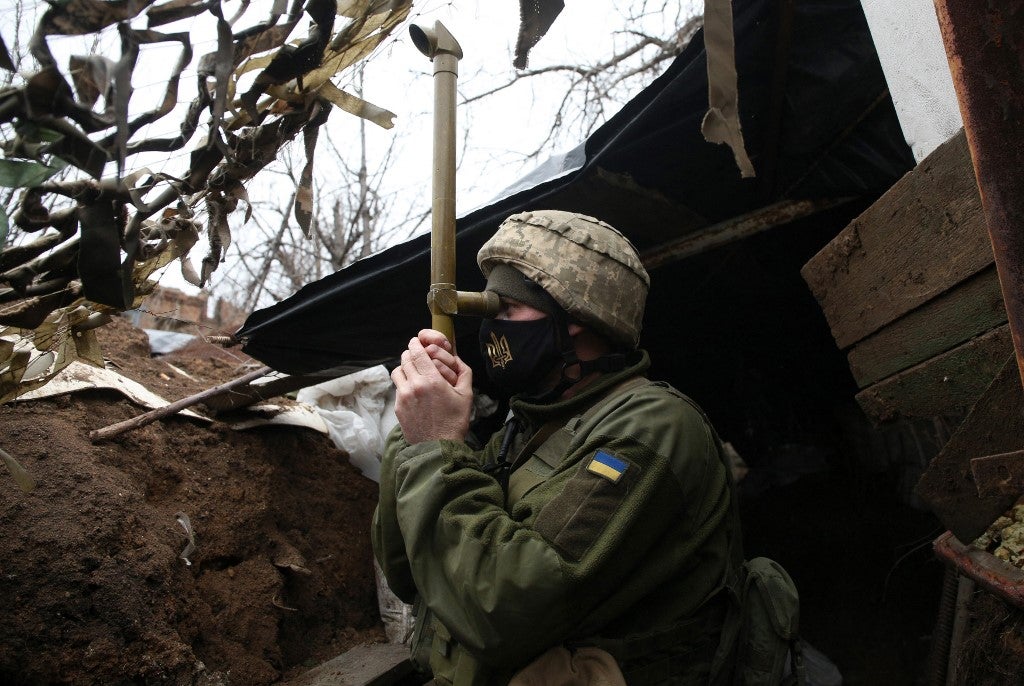 A Ukrainian serviceman stands guard at a position on the frontline with Russia backed separatists near small city of Marinka, Donetsk region on April 12, 2021. – Ukrainian soldiers have been killed in clashes with pro-Russia separatists in Ukraine’s war-torn east, its military said on April 12, 2021, as Kiev again accused Moscow of massing tens of thousands of soldiers on its border. (Photo by STR / AFP)

MOSCOW — Tensions between Ukraine and Russia, accused of massing troops near their border and on the Crimean peninsula it annexed in 2014, have intensified since the start of the year.

Deadly clashes between Ukrainian forces and pro-Russian separatists in eastern Ukraine have since taken place frequently, after a record ceasefire lasting several months.

The European Court of Human Rights on January 14, 2021, rules a complaint brought by Ukraine against Russia alleging human rights violations in the Crimean peninsula in 2014 is “partly admissible”.

At the United Nations on February 11, Russia is accused of blocking a solution to the conflict.

On February 26, new president Joe Biden says that the United States will “never” accept the annexation of Crimea.

On March 2, European Union President Charles Michel announces during a visit to the frontline that the EU will maintain its sanctions on Moscow in return for its support for pro-Russian separatists.

Kiev on March 5 denounces an upsurge of violence in the east of Ukraine, and calls on its Western allies to intervene.

Moscow says it fears “full-fledged war” in the area.

On March 9, Kiev calls for  a summit with France and Germany, co-sponsors of the peace process, and Russia.

Four Ukrainian soldiers are killed on March 26 in a bombardment 30 kilometers (19 miles) to the north of the eastern flashpoint city of Donetsk, the heaviest daily toll since 2019 in the region.

Moscow and Kiev accuse each other on March 30 of causing an escalation in violence.

On March 31, Kiev and Washington say there are Russian troop movements in Crimea and at the Russia-Ukraine border, close to territory controlled by separatists.

On April 1, Ukrainian President Volodymyr Zelensky accuses Russia of massing tens of thousands of troops on the border and in Crimea. The Kremlin calls on Kiev and the West not to “worry” and says Russia is moving its armed forces within its territory “at its discretion”.

The next day the Kremlin says it is “not threatening” Ukraine, tells Kiev to stop its “provocation” and warns the West against sending troops.

Berlin and Paris on April 3 call for an “immediate de-escalation”, with the European Union the next day expressing “severe concern”.

The Kremlin says on April 6 that NATO membership for Ukraine would only “worsen the situation”, after Zelensky urges NATO to speed up his country’s membership plan.

Germany on April 8 calls on the Kremlin to reduce its military presence at the border.

On April 9, Kiev rejects Moscow’s allegations that it is preparing a military offensive against the eastern rebels, accusing Russia of seeking a pretext to attack it.

Turkey says that the United States plans to send two warships to the Black Sea via the Bosphorus.

The Kremlin says on April 11 that it is not moving towards war with Ukraine, as US Secretary of State Antony Blinken warns of “consequences” if Russia acts aggressively towards Ukraine.

On April 12, G7 foreign ministers and the EU’s foreign policy chief urge Russia to stop “provocations” and to “de-escalate tensions”.

Moscow complains on April 13 that American troops are currently being transferred from “North America across the Atlantic to Europe”, a day after Washington’s decision to send 500 extra soldiers to Germany.

NATO says Russia’s military build-up is “considerable” and “unjustified” during a meeting with the Ukrainian Foreign Minister Dmytro Kuleba.

Accusing the United States and NATO of transforming Ukraine into a “powder-keg” and faced with “threatening” NATO actions, Moscow says it is carrying out military exercises at the Ukrainian border.