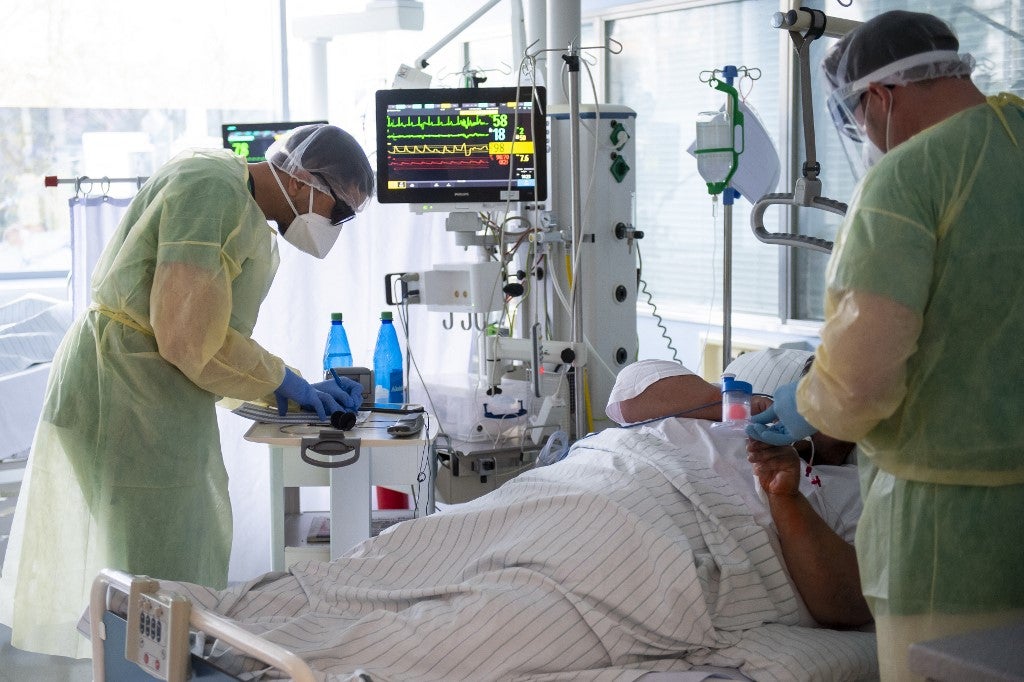 Senior doctor Thomas Marx (R) talks to a patient infected with the novel coronavirus (Covid-19) in an intensive care unit (ICU) at the hospital in Freising, southern Germany on April 12, 2021. – The number of Covid-19 infections in Germany has crossed the three million mark, according to figures published on April 12 by the Robert Koch Institute disease control centre. (Photo by LENNART PREISS / AFP)

FRESING, Germany — A triangle with an exclamation mark has the word “variant” written on it — a warning that has become increasingly common on wards where coronavirus patients are being treated in the Bavarian hospital in Freising.

Germany is gripped by a violent third wave of the pandemic, which has brought an increased number of infections of the more contagious British variant and left many younger patients sick.

“The third wave is clearly upon us,” the hospital’s 42-year-old medical director Thomas Marx told AFP.

Of the clinic’s 14 intensive care beds, five are currently occupied by Covid-19 patients.

The patients are also younger now, with most of them “between 40 and 60”, according to Marx.

“They often have to be intubated and then face a long fight with the virus,” the doctor sighed, adding that one in four do not survive their battle with Covid-19.

In one bed at the intensive care unit, a man of around 40 looked exhausted as he struggled to breathe through an oxygen tube.

“We were ready to intubate him a few days ago, but we managed to avoid it,” said Marx.

Nevertheless, his recovery will still take a long time, the doctor explained at the man’s bedside.

After coming through the first wave of the pandemic relatively unscathed, Germany has been rocked by a rough third wave.

The number of hospitalized patients aged 35 to 49 has “strongly increased” lately, said Lothar Wieler, the head of the RKI infections disease control agency.

Despite repeated warnings from health workers about the urgency of the situation, German authorities are entangled in a fierce political debate over restrictions imposed to fight the pandemic.

While Chancellor Angela Merkel has been pushing for tougher measures to keep the population home and avoid contagion, some of the country’s powerful regional leaders are refusing to sign up.

Fed up with the dithering states, Merkel’s government agreed a law change which would give Berlin more centralized power to impose tougher measures such as night-time curfews in hard-hit areas.

“When I look at the news and I see that the measures are not enough, it’s difficult to take,” admitted Marx.

Laying a gloved hand on his patient’s shoulder, a nurse was trying to understand an intubated patient in his sixties who was sitting propped up by cushions in an intensive care bed.

Conscious but unable to speak, the man can only communicate using a pen and a whiteboard which rests on his knees.

“Do you want to talk to your wife, is that it?” asked the nurse, who was just one of many German health workers doing the best they can in increasingly difficult circumstances.

Marx voiced fears about the days ahead.

“It’s not just a question of treating those with Covid-19, it’s also about dealing with all the other patients and making sure we don’t reduce the quality of their care,” he said.

As the doctor left the ward and took off his visor and protective overalls, the defiant smile underneath his FFP2 mask barely masked his fatigue.