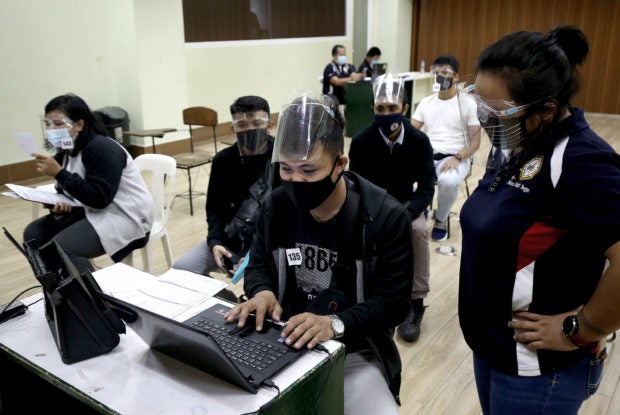 URGENT NEED Applicants for the job of contact tracers are interviewed at the Unibersidad de Manila. —RICHARD A. REYES

MANILA, Philippines — The Department of Labor and Employment (DOLE) said Wednesday that the 5,000 displaced informal workers it will hire as contract tracers will be deployed exclusively in Metro Manila.

DOLE’s Bureau of Workers With Special Concerns Director Atty. Ma. Karina Perida-Trayvilla, however, said that other regions who need contract tracers can request from DOLE if they need to.

“Kasi we are ready naman meron naman naka-allocate if and when kailangan na kailangan,” she added.

(Because we are ready, we can allocate if and when it is needed.)

Trayvilla said that the Department of the Interior and Local Government (DILG) will be in charge of the deployment but will be based on the ratio needed to have an ideal number of contract tracers vis-à-vis the population of the local government unit (LGU).

“So of course mas marami ang madedeploy sa Quezon City, owing to the population that they have and the fact na kulang talaga sila ng contract tracers,” Trayvilla explained.

(So of course more will be deployed in Quezon City, owing to the population that they have and the fact that they really lack contract tracers.)

Submission of application will start on Saturday, April 17, which will last until April 22 only.

Trayvilla said notices of hiring will be blasted on the websites and social media accounts of DILG, Metropolitan Manila Development Authority, DOLE, and respective LGU pages where a link of where to submit the application will be provided.

Applicants will then undergo online training then can be deployed as early as April 26.

Qualifications for applicants include having a high school diploma, basic communication skills and basic knowledge in using the telephone and internet.

“We are really happy that DILG agreed to relaxing some of the qualifications requirements, they took into account our program, the TUPAD, which is generally for informal sector workers,” said Trayvilla.

Applicants are also required to submit medical clearance from the local health office, and a barangay clearance which certifies that they do not have derogatory information and that they are a displaced worker.

The monthly salary for successful applicants would be based on the prevailing regional minimum wage which is P16,110 or P537 per day in Metro Manila, according to DOLE.

Trayvilla said the contract tracers will receive insurance included in the assistance package provided by TUPAD.

“We also requested to LGUs, as counterparts to the project, that there should at least be healthcare assistance plus RT-PCR test para sa (for the) tupad beneficiaries,” said Trayvilla.

She added that they are also currently in talks on whether the contract tracers will be included in the LGUs’ vaccination program.

Trayvilla said that they (DOLE) are hoping that the respective LGUs will also shoulder the Tupad beneficiaries’ transportation and communication expenses as partners to the project.

Initially, DOLE announced that it will hire 12,000 workers, however, to prolong the work days into 90 days, “we had to scale down the number of workers into almost 5,000,” said Trayvilla.

RELATED STORIES: DOLE to hire only 5,000 contact tracers for ‘NCR Plus’

If hired, the contract tracers are expected to work four hours a day, for 90 days.

Trayvilla said the guidelines for the program and the Joint Memorandum Circular will be released next week.