Zarate: Balikatan exercises would only heighten tension between US, China 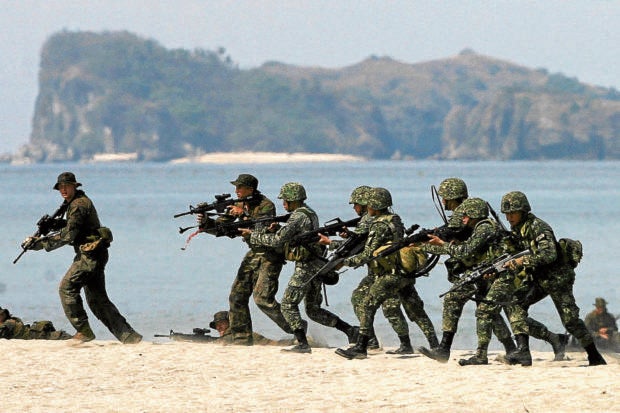 JOINT TRAINING In this photo taken in 2015, a team of US Marines and Filipino soldiers trains on a beach along the West Philippine Sea in San Antonio town, Zambales province, as part of the Balikatan military exercises between the United States and the Philippines. —MARIANNE BERMUDEZ

MANILA, Philippines — Proceeding with the Balikatan exercises with the United States would only heighten the tension between the US and China, with the Philippines smacked in the middle, Bayan Muna Rep. Carlos Zarate said Wednesday.

Zarate made the remark as the Philippine and US soldiers began its two-week joint military exercise, also known as Balikatan exercises, amid the rising tension over the West Philippine Sea (WPS).

The lawmaker said the Balikatan exercises “only serves to heighten the tension between the US and China,  placing the Philippines smack in the middle of two competing super powers.”

“It would be best for the Philippine government to assert its sovereignty on the West Philippine Sea without playing one superpower against the other. If this  competition for dominance escalate, we will surely be crushed in the middle of it all,” Zarate said in a statement.

“What can be done now is to call for a de-escalation of tensions in the WPS and to demilitarize the area,” he added.

Instead, the Philippines should be in the forefront in the passage of code of conduct among claimant countries in the contested waters that can be strictly implemented, said Zarate.

According to the lawmaker, as standing members of the Asian Parliamentary Association (AIPO) and the Inter-Parliamentary Union (IPU), the Philippine government should use these venues to gain international support against Chinese expansionism and militarization of the West Philippine Sea.

“We may not win through military might against China or any superpower but certainly we are strong in the legal, moral, and diplomatic arenas,” Zarate said.

The Balikatan exercises began on April 12, resuming the annual training event after last year’s cancellation due to the pandemic.

Unlike previous exercises, however, this year’s Balikatan drills to test the readiness of their militaries to respond to threats such natural disasters and militant extremist attacks, will be scaled down.

Only 1,700 troops — 700 from the United States and 1,000 from the Philippines — will participate, unlike previous exercises which involved as many as 7,600 soldiers, said Lieutenant General Cirilito Sobejana.