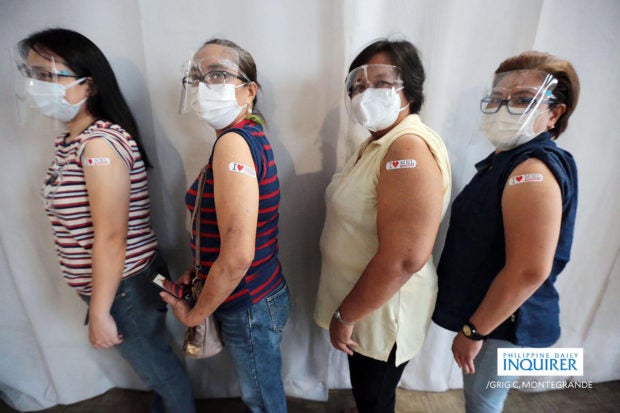 ONE BRAND Teachers show their vaccination marks after receiving jabs of the CoronaVac vaccine after their inoculation in Manila on Tuesday.—GRIG C.MONTEGRANDE

MANILA, Philippines — Due to low supply and the uncertainty of the next deliveries, the government’s Vaccine Expert Panel (VEP) has begun studying the possibility of allowing a person to be vaccinated with two different brands of COVID-19 jabs for the first and second doses.

Previously, experts have maintained that the same brand should be administered for both doses, but VEP chair Dr. Nina Gloriani on Tuesday said that from an immunological point of view, there was no issue with mixing brands.

“Our supplies are low. Sometimes we have to be realistic about what vaccine we can give, especially since the second dose cannot be delayed for too long,” Gloriani said in a press briefing on Tuesday.

She also stressed that specific guidelines should be in place that would allow the mixing of vaccine brands.

Health Undersecretary Maria Rosario Vergeire has maintained the position of both the Department of Health (DOH) and the Food and Drug Administration that the first and second doses of an administered vaccine should be of the same brand.

Gloriani also cited the need to come up soon with locally produced vaccines so the country would not remain at the mercy of foreign suppliers.

“The Department of Science and Technology (the mother agency of the VEP) is already exploring this proactively. We cannot be at the mercy of suppliers who can just decide not to provide us with vaccines,” she said.

“We should have started this long before, but never mind, we have to learn from this,” she said.

Also on Tuesday, Secretary Carlito Galvez Jr., chief implementer of the National Task Force Against COVID-19, said the Philippines was negotiating for at least 20 million Pfizer doses with the United States.

“[W]e’re happy they (the United States) confirmed their initial commitment,” Galvez said in an interview with ANC.

He thanked the country’s ambassador to the United States, Jose Manuel “Babe” Romualdez, for helping in the negotiations on the vaccine deal.

Galvez said the Philippines was intent on purchasing a minimum of 20 million doses but was told by the American drug company that the order could go as high as 40 million “at a very low price.”

“Hopefully, (Pfizer) will be included in COVAX,” he said, referring to the global vaccine pool led by the World Health Organization.

“So over and above our bilateral (negotiation), we could get more through COVAX,” Galvez said.

Galvez described Pfizer as the “most sought-after brand” among the COVID-19 vaccines currently in use.

He said the Pfizer doses may become available by the middle of the year or once the United States finishes inoculating its population in time for its Independence Day celebration on July 4.

The Philippine government is also seeking an earlier release of the 20 million doses of the Moderna vaccines it purchased with the private sector.

“[The] US had said they would spare some excess doses to [its] allied countries,” Galvez said.

“If they (the vaccine orders) will arrive on time and [without] slippage in production, we’ll have more or less 148 million doses not later than the end of December,” Galvez said.

According to him, 1,053,256 individuals have so far been administered initial doses of either Sinovac Biotech’s CoronaVac vaccine or the AstraZeneca vaccine.

This is the first time in four days that new infections were less than 11,000 in a single day.

The department said the lower number of new cases could be due to the nonoperation of about 36 laboratories on April 11.

Furthermore, nine laboratories were unable to submit their data on time, the DOH said.

Meanwhile, 400 patients have recovered, bringing the total number of recoveries to 703,963. However, another 137 individuals have also succumbed to the respiratory disease, pushing the total death toll to 15,286.