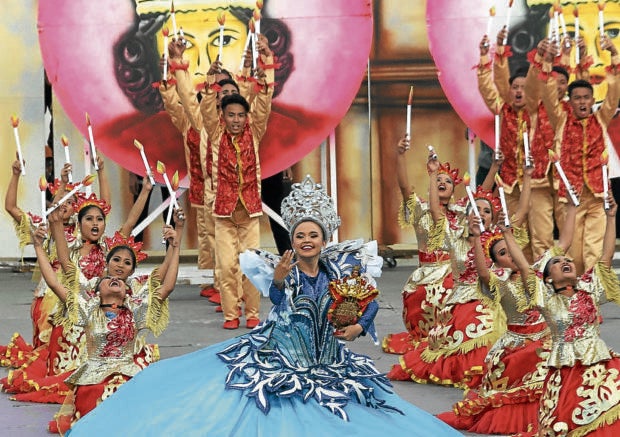 HONORING STO. NIÑO In this 2019 photo, Sinulog dancers perform in honor of Sto. Niño de Cebu, the oldest image in the Philippines that is part of the first Catholic baptism500 years ago. The original image of the Child Jesus, now kept at a basilica in Cebu City, was given by Portuguese explorer Ferdinand Magellan to Cebu’s Queen Juana as a baptismal gift on April 14, 1521. —JUNJIE MENDOZA

CEBU CITY—Pope Francis’ representative to the Philippines is leading the celebration of the 500th anniversary of the first Catholic baptism in the country here on Wednesday, amid strict security and health protocols due to the COVID-19 pandemic.

At least 10 bishops are expected to attend the 4 p.m. Eucharistic celebration that Archbishop Charles Brown, the papal nuncio to the Philippines, will officiate at Plaza Sugbo, where the kiosk housing Magellan’s Cross is located.

Fr. Mhar Balili, secretary general of the 500 Years of Christianity celebrations, said a reenactment of the first baptism on Philippine soil would be held at the same venue.

Plaza Sugbo can accommodate 3,000 people but only 700 guests will be allowed to ensure physical distancing, Balili said.

Among the guests are National Historical Commission of the Philippines Chair Rene Escalante and Presidential Assistant for the Visayas Michael Lloyd Dino, who will represent President Duterte.

After the Mass, the Basilica Minore del Sto. Niño de Cebu Church and the image of Sto. Niño will be declared national cultural treasures.

Organizers said only a few bishops will be attending the celebration due to travel restrictions imposed to stop the spread of COVID-19 in different parts of the country.

Among those who could not travel to Cebu are Davao Archbishop Romulo Valles, president of the Catholic Bishops’ Conference of the Philippines (CBCP), and Archbishop Pablo David, the group’s vice president.The CBCP will be represented by its secretary general, Msgr. Bernie Pantin.

The public was advised not to go to the event and to instead watch the activities online through the Facebook page, 500 Years of Christianity-Archdiocese of Cebu and My TV Cebu.

The event commemorates the first baptism in the country officiated by Pedro de Valderama, the chaplain of the expedition led by Portuguese explorer Ferdinand Magellan, on April 14, 1521, as witnessed and documented by Antonio Pigafetta. Accounts by Pigafetta showed that about 800 natives, including Cebu’s chieftain, Rajah Humabon, and his wife, Hara Humamay, were baptized that day.

Humabon and Humamay, who received the Christian names Carlos and Juana, respectively, were said to be the first to embrace Christianity in the Philippines.

Magellan presented Juana an image of Sto. Niño, or the Holy Child Jesus, and later asked to be baptized, according to accounts citing Pigafetta’s journals.

Juana then asked Magellan to give her the Sto. Niño to keep in place of her idols.

The 500-year-old image of the Sto. Niño has been preserved and venerated inside the basilica in downtown Cebu City.