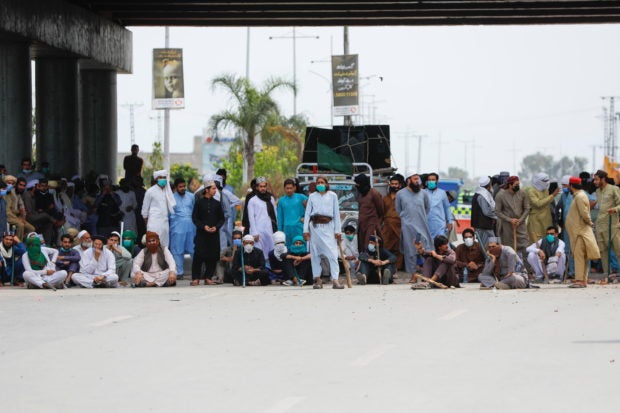 Supporters of the Tehreek-e-Labaik Pakistan (TLP) Islamist political party carry sticks as they block a road during a protest against the arrest of their leader, in Peshawar, Pakistan April 13, 2021. REUTERS/Fayaz Aziz

ISLAMABAD — Thousands of Pakistani Islamists clashed with police for a second day on Tuesday in protest against the arrest of their leader ahead of rallies denouncing French cartoons depicting the Prophet Mohammad, officials said.

At least one activist and one police officer died from wounds suffered overnight after Islamists blocked highways, rail tracks, and main entry and exit routes, paralyzing business in almost all major cities.

Police fired tear gas to disperse the protesters, government official Naveed Zaman told Reuters, adding that they had refused to leave until the release of their leader, Saad Rizvi, who was arrested on Monday.

Rizvi is the head of an extremist group, Tehrik-i-Labaik Pakistan (TLP), that rose to prominence making the denunciation of blasphemy against Islam its rallying cry.

The protesters beat one officer, who died on Tuesday, and wounded at least 40, a police spokesman in eastern Lahore told Reuters.

One protester died in a southwestern district, a police chief said on condition of anonymity.

The video showed some protesters beating and dragging police and pedestrians, which government adviser Hafiz Tahir Ashrafi condemned. He told Reuters the law would take its course against those responsible.

The group blocked one of the main roads into the capital late last year and called off their protest only after the government signed a deal with them, agreeing to endorse a boycott of French products. 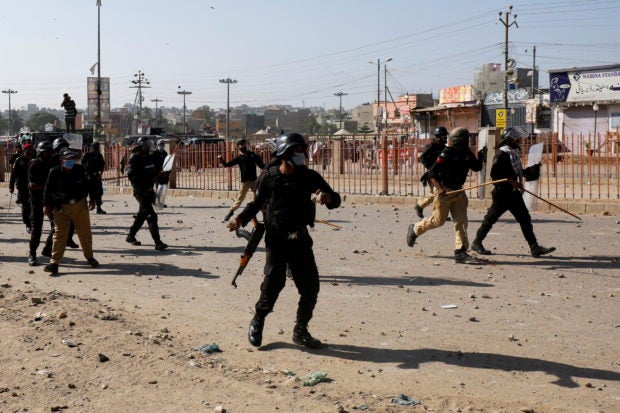 Police officers throw stones to disperse the supporters of the Tehreek-e-Labaik Pakistan (TLP) Islamist political party during a protest against the arrest of their leader in Karachi, Pakistan April 13, 2021. REUTERS/Akhtar Soomro

At the time, protests had broken out in several Muslim countries over France’s response to a deadly attack on a teacher who showed cartoons mocking the Prophet Mohammad to pupils during a civics lesson.

Pakistan’s parliament had condemned the re-printing of the cartoons in France, urging the government to withdraw its ambassador.

For Muslims, depictions of the Prophet are blasphemous.

The agreement with the government was revised earlier this year to extend the deadline for a parliament resolution to expel the French envoy until April 20 when the group had plans to hold countrywide rallies.

Police arrested Rizvi ahead of the demonstrations.

“We are out on the streets because the government didn’t honor the agreement,” said the group’s spokesman, Ejaz Ashrafi.

He said he had received reports of eight protesters being killed in the clashes.

The French embassy in Islamabad and Pakistan’s foreign ministry did not respond to a request for comment.