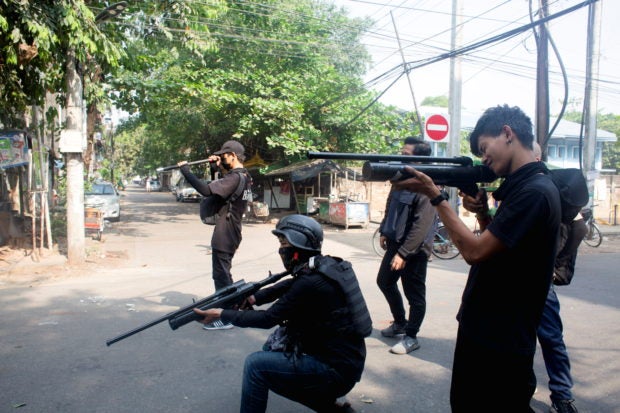 Geneva, Switzerland — The UN rights chief warned Tuesday of possible crimes against humanity in Myanmar and said it seemed to be heading towards a massive conflict like the one ravaging Syria.

In a statement, the UN rights office urged countries to take immediate and decisive action to push the military leaders behind a February 1 coup in Myanmar to stop their “campaign of repression and slaughter of its people.”

“I fear the situation in Myanmar is heading towards a full-blown conflict,” Michelle Bachelet, the United Nations High Commissioner for Human Rights, said in the statement.

“States must not allow the deadly mistakes of the past in Syria and elsewhere to be repeated.”

Myanmar is in chaos and its economy paralyzed since the military seized power from civilian leader Aung San Suu Kyi on February 1.

A junta crackdown against dissent has resulted in the civilian death toll reaching at least 710 as of late Monday including 50 children, according to a local monitoring group.

Ethnic armed rebel groups have meanwhile stepped up attacks on the military and police in recent weeks, raising fears of Myanmar spiraling into broader civil conflict.

And the military has retaliated with airstrikes that have reportedly displaced thousands of civilians.

“The military seems intent on intensifying its pitiless policy of violence against the people of Myanmar, using military-grade and indiscriminate weaponry,” Bachelet said.

“There are clear echoes of Syria in 2011,” she warned, referring to the start of a civil war that over the past decade has killed nearly 400,000 people and forced more than six million to flee the country.

“There too, we saw peaceful protests met with unnecessary and clearly disproportionate force,” she said.

“The state’s brutal, persistent repression of its own people led to some individuals taking up arms, followed by a downward and rapidly expanding spiral of violence all across the country.”

Bachelet pointed out that her predecessor Navanethem Pillay had warned in 2011 “that the failure of the international community to respond with united resolve could be disastrous for Syria and beyond.”

“The past 10 years have shown just how horrific the consequences have been for millions of civilians,” she said.

At least 82 anti-coup protesters were reportedly killed in the brutal crackdown.

Security forces also reportedly prevented medical personnel from helping the wounded and charged relatives a “fine” of around $90 to claim the bodies of those who were killed, the UN rights office said.

At the same time, it said, at least 3,080 people are currently detained across the country, while 23 people have reportedly been sentenced to death following secret trials, including four protesters and 19 others accused of political and criminal offenses.

“Statements of condemnation, and limited targeted sanctions, are clearly not enough,” the former Chilean president said.

“States with influence need to urgently apply concerted pressure on the military in Myanmar to halt the commission of grave human rights violations and possible crimes against humanity against the people.”