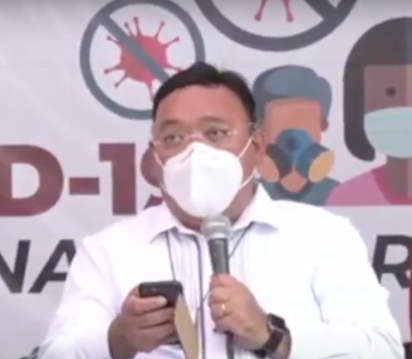 Presidential spokesperson Harry Roque speaks during a briefing at the UP-PGH for the rollout of Sinovac’s CoronaVac. Screengrab from RTVM/PTV

MANILA, Philippines — Presidential spokesperson Harry Roque on Tuesday insisted that he did not get special treatment when he got admitted at the Philippine General Hospital (PGH) because his condition merited hospital admission.

He said that “palakasan” does not work at PGH, adding that he was in “bad shape” when he was admitted.

(No one can throw his weight around here in PGH. When I got admitted, it was because the condition merited the admission.)

“I can assure you na gaya ng lahat ng hospital, ang basis for admission kailangan moderate at severe cases. Sa aking kaso, I was in bad shape when I was admitted,” he added.

(I can assure you that like all hospitals, the basis for admission is you need to be a moderate or severe case of COVID-19. In my case, I was in bad shape when I was admitted.)

In the same breath of saying he did not get special treatment, Roque touted that all of his doctors are in PGH, who, he said, are his colleagues in the faculty in the University of Philippines.

He also said his connections in PGH also ran “deep” in PGH since that is where he was born and he is a member of an association of those who are born at the hospital.

However, he assured he did not use his position as President Rodrigo Duterte’s mouthpiece to secure a bed at PGH since his doctors in PGH were already his doctors long before he joined the government.

He previously slammed as “unchristian” a query on how he was able to secure a hospital bed for COVID-19 treatment.

On Tuesday, he explained that the question is unchristian because it implies that people who got admitted to hospitals pulled some strings to do so.

(It is unchristian because it seems that if you get a hospital bed during this time, you have pulled some strings and hoodwinked another person.)

Last Saturday, April 10, Roque reported he was admitted to a hospital for COVID-19 treatment after contracting severe respiratory disease anew.

He first announced he has COVID-19 on March 15, and has recovered on March 25, when he already tested negative for coronavirus infection.

On Sunday, he said he already “feels normal” on his third day in confinement.

Roque said doctors won’t discharge him until he’s completed four more vials of remdesivir, which will leave him confined until Thursday.

During Tuesday’s briefing, Roque revealed he experienced symptoms of the disease on April 5, and he tested positive again for the coronavirus on April 6.

To recall, Roque was able to hold his regular press briefing at the New Executive Building in Malacañang complex on those dates.

He even had testing czar Vince Dizon join in his briefing on April 6.

Many have questioned Roque’s hospitalization, with some pointing out he received special treatment, especially after reports of hospitals reaching full capacity, forcing patients to wait in long queues in emergency rooms, isolate in their cars, or being told to go home.

Some have even reportedly died in emergency rooms without getting admitted or getting medical intervention.