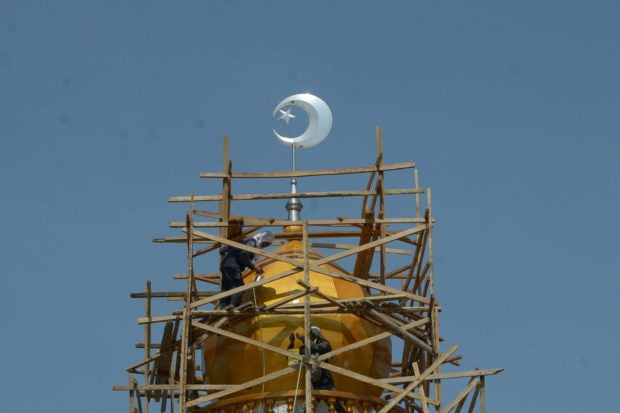 HOLY MONTH Workers repaint the minaret at Ecoland Islamic Center in Davao City in this photo taken last week as Muslims prepare for the monthlong observance of Ramadan beginning on Tuesday. Imams and other community leaders urge worshipers who will not be accommodated in mosques to pray in their homes. —BING GONZALES

DAVAO CITY, Davao del Sur, Philippines — As Muslims start fasting for the month of Ramadan on Tuesday, their second observance in the time of the coronavirus disease (COVID-19) pandemic, an Islamic scholar has called on mosque leaders to implement a “first come, first served” rule for worshippers in line with the city government’s 50 percent accommodation policy.

“Last year, there were those who got angry because they were prevented from entering the mosques,” Aleem Muhammad Yusof Pasigan, mufti of the Davao region, said in an interview over the city-run Davao City Disaster Radio.

The local government has directed mosques, along with Christian churches, to limit their seating capacity to only 50 percent to reduce mass gatherings as part of efforts to stop the spread of the COVID-19 virus.

Davao City is under general community quarantine until the end of the month.

The Bangsamoro Darul Ifta—the Cotabato City-based Islamic authority in the Bangsamoro Autonomous Region in Muslim Mindanao (BARMM)—has declared Tuesday the official start of Ramadan even after religious scholars and volunteers failed to see the moon on Sunday in the region.

The sighting of the crescent moon heralds Ramadan, the ninth month of the Islamic calendar, but it was not visible that night, prompting the declaration.

“By virtue of the authority vested in me as Grand Mufti of BARMM, I hereby announce that we will start fasting on this blessed month of Ramadan on Tuesday, April 13,” Grand Mufti Abu Huraira Udasan announced over social media platforms on Sunday.

Fasting (“sawm” in Arabic) during Ramadan is one of the five pillars of Islam. For 29 to 30 days, Muslims abstain from eating, drinking, engaging in any sexual activity, and committing sinful acts from daybreak to dusk from the time the new moon is seen up to its next appearance in the month of Shawwal of the Hijrah calendar.

Exempted from fasting are children below puberty, pregnant and lactating mothers, those who are physically and mentally incapable, and travelers. But, except for the travelers, they may compensate for missing the ritual by funding those who will fast for them.

Pasigan said there should be a clear accommodation policy in mosques.

Imams and other leaders should inform their constituents that if they arrived late or when the mosques already exceeded the limit, they must just pray in their homes, he said.