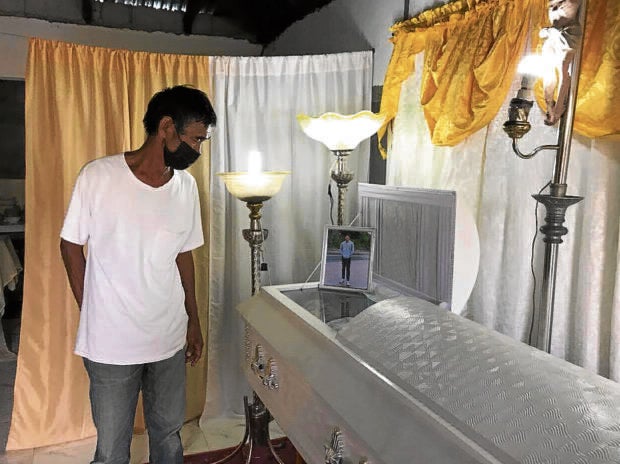 FATHER IN MOURNING Juanito Jimenez Jr., gazes at the remains of his son Ernanie during the wake at their home in Quezon province on Monday. Ernanie was arrested for a curfew violation and died on April 9 after he was beaten by village watchmen in Calamba City. —PHOTO COURTESY OF PEEWEE BACUÑO

LUCENA CITY, Quezon, Philippines — Police are preparing to file a case of homicide against the team of barangay tanod (village watchmen) who allegedly beat to death Ernanie Jimenez, 26, on April 7 in Calamba City, Laguna province.

Police assured the victim’s family that the culprits will be brought before the court and face trial.

“As a matter of fact, all documents, reports related to the case are ready for filing. We’re just waiting for the family of the victim [to lodge the formal complaint],” Laguna police spokesperson Lt. Col. Chitadel Gaoiran said in a phone interview on Monday.

She said two suspects have been identified, Arjay Bahan Abierta and John Oriel Ortiz, both watchmen in the village of Turbina in Calamba, and would be named in the complaint to be lodged before the city’s prosecutor’s office.

However, she clarified that the suspects were not yet in police custody due to lack of criminal charges against them.

Gaorian said the police planned to file a complaint on Monday but the Jimenez family requested that this would be done after Ernanie’s burial in his hometown Tagkawayan in Quezon province on Tuesday.

Ernanie died hours after he was beaten by village watchmen on the night of April 7 who arrested him for violation of the 10 p.m. to 5 a.m. curfew when he went out at 11 p.m. to buy food, according to the victim’s brother Gledien. (See related story on Page A5)

The curfew was imposed in the provinces of Laguna, Cavite, Rizal, Bulacan and Metro Manila as they were under the strict enhanced community quarantine status until April 11 to curb the rise of COVID-19 cases in these localities.

Gledien, citing accounts of witnesses, said his brother peacefully went with the arresting group to the barangay office but when Ernanie went out of the village hall to urinate, the village watchmen followed and severely beat him up.

The victim sustained grave head injuries that led to his death before noon on April 9 due to a fractured skull, the brother said.

Gledien claimed that Ernanie’s common-law wife went to the Calamba police station to report the mauling but was allegedly given the runaround by the officers on duty. Gledien said he also went to the same police station after Ernanie died and learned the complaint was not recorded.

Gaoiran clarified that the case was officially recorded at the Calamba police station after the family, referring to Gledien, reported the incident.

“Sometimes, the desk officer has to attend to a lot of matters. The public should understand,” Gaoiran said, to explain what likely happened and why the common-law wife’s complaint was not recorded in the police blotter.

Meanwhile, Calamba Medical Center (CMC) clarified they did not deny treatment to the victim due to lack of advance payment, as claimed by Gledien.

Chris San Juan, a staff at CMC information office, explained that an “outpatient” is required to provide payment before availing of the services of the hospital. However, if the patient is already at the emergency room, the medical staff are obligated to immediately attend to the patient without asking for advance payment. “The bills will be given after the treatment. That’s the hospital policy,” she explained.

Gledien said they went to CMC to seek treatment for his brother but he was not attended to despite his plea because he did not have the P7,000 the hospital was asking for. He said they had no choice but to bring home his brother at dawn on April 9 and brought him back to the same hospital in the morning after a relative sent them the money. Ernanie, however, died hours later.

Human rights group Karapatan on Monday demanded the prosecution of the culprits in the death of Jimenez.

“We underscore the need to prosecute and hold accountable government officials and state forces involved in the physical assault, torture, cruel, inhuman or degrading treatment of those who allegedly violated quarantine restrictions,” Cristina Palabay, Karapatan secretary general, said in a statement.

She stressed the death of Jimenez was particularly distressing as he was a mere curfew violator.

Another curfew violator in General Trias City in Cavite province, Darren Peñaredondo, also died on Black Saturday, some two days after he was severely weakened by the strenuous exercise routine he was made to go through by his captors who arrested him on Maundy Thursday.