MANILA, Philippines — Global prices of food commodities rose for the tenth consecutive month in March, with vegetable oils and dairy products as leading factors, according to the United Nations (UN) and the Food and Agriculture Organization (FAO).

According to the agency’s update of its Food Price Index released on April 8, the international prices of commonly-traded food commodities averaged 118.5 points.

The index is trade-weighted and tracks international market prices for the cereals, vegetable oils, dairy, meat, and sugar commodity groups.

The FAO said the steep increase was 2.1 percent higher than in February. The organization added that the recent value is at its “highest level since June 2014.”

“The increase was led by strong gains in vegetable oils, meat and dairy sub-indices, while those of cereals and sugar subsided,” FAO said.

The FAO Vegetable Index led the increase after it averaged 159.2 points in March, eight percent higher than the previous month and its highest level since June 2011. The sharp rise in prices of palm, soy, rapeseed, and sunflower oils has been a driving factor for the increase in the index.

Analysis by market and data consumer company Statista noted that the “dry weather and production disruptions due to COVID-19” along with other factors including the “high demand from India’s Diwali festival as well as from China” caused the decrease in global palm oil inventory – which resulted to rise in oil prices. 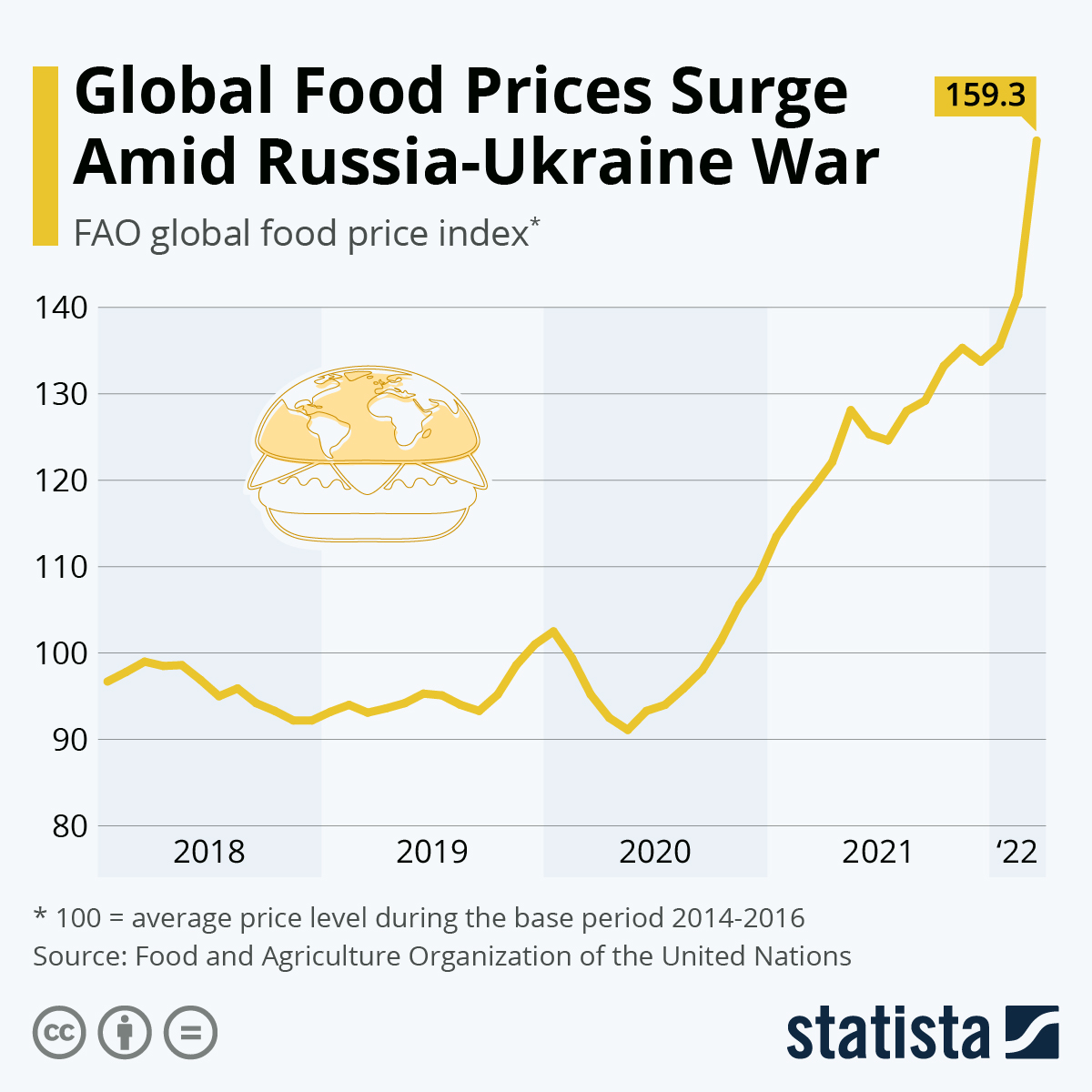 The FAO recorded a 3.9 percent uptick in the Dairy Price Index after international butter prices rose due to tight supplies in Europe as well as an increased demand “in anticipation of a food-service sector recovery.”

“The FAO Dairy Price Index averaged 117.4 points in March, up 4.4 points (3.9 percent) from February, rising for the tenth consecutive month and lifting the index to nearly 16 percent above its value in the corresponding month last year,” the FAO Food Price Index report read.

The organization also explained that the price index for dairy escalated after prices for milk powder soared, supported by a surge in imports in Asia, especially in China.

In a report presented during the 49th session of the FAO Advisory Committee on Paper and Wood Products in 2008, the organization identified household food insecurity and malnutrition as one of the impacts of the rising global food prices.

Food insecurity is defined by FAO as the lack of consistent access to enough food to ensure an active and healthy life. It also refers to malnutrition and undernourishment.

“The recent rapid rise in food prices has had an immediate impact that is affecting all countries, but particularly Low-Income Food-Deficit Countries, where it is raising the cost of food imports and exacerbating the balance of trade,” FAO said.

“It is causing greater hardship for poor families in both developed and developing countries. Hundreds of millions of people in developing countries already face hunger and malnutrition on a daily basis, and many more will be added to their number,” it added.

Last year, the FAO’s State of Food Security and Nutrition in the World report bared that at least 59 million Filipinos consider themselves food insecure between 2017 and 2019.

Of the sum, 18.8 million were considered severely food insecure.

The FAO likewise noted that among Southeast Asian countries, the Philippines had the highest count of food-insecure citizens.