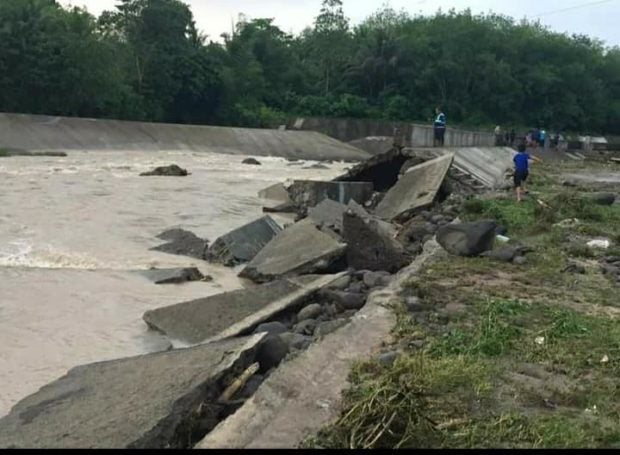 The destruction left by floods in Taluntalunan River. CONTRIBUTED PHOTO

KIDAPAWAN CITY – Close to 20 houses were destroyed and a hundred families evacuated when a huge river that descended from the country’s highest peak overflowed following heavy downpour here Saturday night.

Most of the victims were unprepared and salvaged nothing out of their home valuables as they hurriedly fled to safer grounds.

Cotabato Gov. Nancy Catamco said they were still trying to assess the cost of damage and the total number of families affected.

The Cotabato provincial office said at least 100 families or about 500 individuals were displaced in Makilala and Mlang towns.

Catamco and members of the provincial disaster risk reduction and management council went to Barangay Luayon to conduct ocular inspection near the Talutalunan River that overflowed amid heavy downpour on Saturday night.

To date, no one was reported injured or killed in the disaster, Catamco said. The hardest hit villages in Makilala included Sta. Felomena, Taluntalunan, Bulakanon and Luayon. He said a dozen homes were destroyed, carried away by rampaging flood waters about 7 p.m. Saturday in Sitio Calot, Barangay Luayon, Makilala.

Huge boulders, fallen trees and forest products were visible in residential areas, not only in Makilala town but also in the neighboring town of Mlang, also in Cotabato.

Makilala has been at the receiving end of Taluntalunan and Malasila Rivers.

The municipal disaster risk reduction and management council reported an initial 20 homes totally damaged and 15 partially destroyed after these were hit by boulders and mud carried by the rampaging water.

Barangay Perez councilman Erwin Catipay said 24 families whose homes were either submerged by mud or carried away by the floods currently took shelter at the village covered court. “We experienced only light to moderate rain here but we were surprised to see the rivers overflow, maybe because there was a heavy downpour upstream,” Kagawad Catipay theorized.

A hanging bridge in Barangay Sta. Felomina was destroyed, and the flood control dike in Barangay Bulakanon, also in Makilala, was also partially broken.

In President Roxas town, motorists volunteered to remove the huge rocks that fell from the mountain and blocked the concrete highway in Barangay Greenhills at 7 p.m. Saturday.