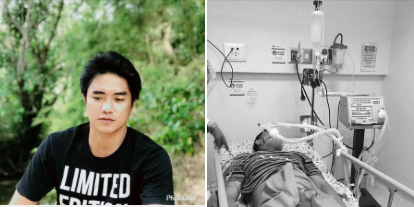 The victim Ernanie Lumban was repeatedly beaten up by the barangay’s quick response team after his arrest for violating curfew rules. Images from Anakbayan Calamba

MANILA, Philippines — Another curfew violator has died in Calamba, Laguna after he was allegedly beaten up by a team of barangay tanod.

According to the police report, witnesses said the victim Ernanie Lumban was repeatedly beaten up by the barangay’s quick response team after being arrested for violating curfew rules in Purok 2, Barangay Turbina, Calamba City, Laguna.

The victim collapsed and was brought to Calamba Medical Center Hospital for treatment, but died due to his injuries.

Police said that they are already investigating the incident.

In a Facebook post, activist group Anakbayan Calamba explained that the victim went outside at around 10p.m. on April 7 to buy food when he was arrested by Barangay tanods for violating curfew rules.

According to Anakbayan Calamba, Jimenez obliged peacefully when he was arrested. However, after asking if he could go to the bathroom, the barangay tanods snapped at Jimenez which made him run out of fear.

When he was caught again, the tanods allegedly beat Jimenez up where he sustained numerous bruises, wounds, and a broken skull.

The victim was then rushed to Calamba Medical Center (CMC) and was refused treatment, Anakbayan said.

(Duterte is also one of those who should be held accountable because of his rudeness, uselessness and being a gunpowder-brain.)

Laguna, along with Metro Manila, Cavite, Bulacan, and Rizal are currently under the strictest enhanced community quarantine amid the surging cases of COVID-19 in the said areas.

This is the second recorded death of a curfew violator this April.

Just two weeks ago, April 1, a curfew violator in General Trias, Cavite died after being asked to perform 300 rounds of body pumping exercise as punishment for violating quarantine protocols.

Police officers involved in the incident along with General Trias’ police chief were then sacked after the investigation.

The Philippine National Police recently said that the police are barred from arresting quarantine violators.

Only the courts can determine what punishments should be imposed on violators.