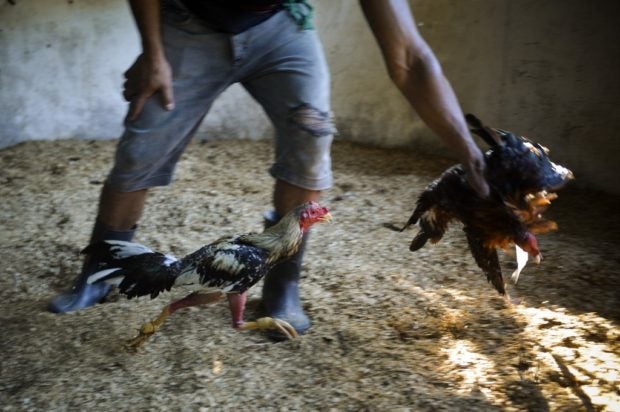 In this file photo taken on September 21, 2020, a man trains his cocks to fight in Havana. Cuba’s Council of State on April 10, 2021 published a long-awaited decree law on animal welfare, the first in the country’s history, with fines for abusers but allowing cockfighting and religious slaughter. Photo by YAMIL LAGE / AFP

HAVANA — Cuba on Saturday published a new animal-welfare law, the country’s first, providing fines in cases of abuse but not banning cockfights or animal sacrifices during religious rites.

The legislation is considered a victory for Cuba’s civil society, one of the first times its demands have become law in the Communist country.

On April 7, 2019, some 500 people marched in Havana to demand an animal-protection law, in what was the first independent, nonpolitical mass demonstration ever authorized by the Cuban government.

In February, a few dozen animal-rights activists assembled again in front of the Agriculture Ministry.

The new decree, published by the Council of State, says in part that the establishment of rules guaranteeing “animal welfare and raising awareness in our population on the care and respect of animals is a demand of our society.”

The objective, it adds, is to achieve “a harmonious relationship between human beings and other species, as an indispensable condition for the existence of all.”

In its Article 9, the decree forbids anyone “to provoke a confrontation between animals of any species, unless an exception is approved by the relevant authority.”

Fights between dogs are thus banned, but cockfights — a longtime tradition in Cuba, seen even on the family property of Fidel Castro — remain legal so long as they are sponsored by specific state-supervised clubs.

Similarly, animal sacrifices by the Santeria, the syncretic religion that originated in Nigeria before being brought to Cuba by enslaved people, are still authorized.

The decree does stipulate, however, that “animal sacrifices must be carried out rapidly and compassionately, to avoid pain and stress.”

Animals receiving protection include “all mammals, birds, bees, reptiles, fish, mollusks, crustaceans and amphibians,” and animal welfare is defined as “the adequate state, from both physical and mental viewpoint, of an animal in conditions of life and of death.”

“The road will be very long,” the activist told AFP, adding that she heard about it while searching for food for her 60 animals, with shortages of basics frequently a problem in Cuba.

“But it is surely positive that now there is a law,” even if “there are many things (in the text) that are not good,” she said.