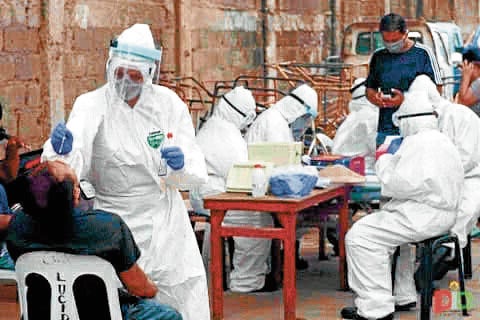 Dr. Mary Jean Loreche, spokesperson and chief pathologist of the Department of Health in Central Visayas (DOH-7), described as “discriminatory and lack of courtesy” a social media post of the Presidential Communications Operations Office (PCOO) on Tuesday that named the Central Visayas variant as among the COVID-19 variants that infected many Filipinos.

“It seems that the region was singled out with the rest of the country. Central Visayas is not distant to the Philippines,” she said in a press conference on Wednesday.

“You cannot discriminately label or mislabel whatever variants of concern there is and specifically point it out to Central Visayas,” she added.

Loreche also demanded an explanation from the Philippine Genome Center (PGC) where the PCOO got the details of what it posted on social media.

In its post on Facebook, the PCOO said there are four COVID-19 variants that affect the country, namely the United Kingdom variant which infected 237 persons, the South Africa variant (163 cases), the Central Visayas variant (104 cases), and the Brazil variant (one case) as of April 6.

According to the Office of the Presidential Assistant for the Visayas (OPAV), the PCOO confirmed that they posted the graphic card on social media.

However, it said that the details came from the PGC.

Last month, authorities detected a new variant of coronavirus known as P.3 from the majority of samples coming from Central Visayas.

While the new variant was first detected in the region, Loreche said there was no scientific basis that the variant came from Central Visayas.

“I would like to ask you to stop calling it the Central Visayas variant because it does not have any basis,” she said.

Loreche surmised that using the region’s identity might have a huge impact on the tourism and economy of Central Visayas.

“People might no longer come to Central Visayas because there is reportedly a COVID-19 variant from here,” she said.

She said other countries would issue a travel ban on Central Visayas.

“I would caution those that have taken upon themselves to call this variant of concern as Central Visayas variant unless they really believed that Central Visayas or Cebu for that matter is already another country. It is unfair and it is reckless,” she said.

Presidential Assistant for the Visayas Michael Dino said he will write a letter to the Office of the President to rectify the report.

“They can’t call that a Central Visayas variant. It’s really unfair to us,” he said.

Meanwhile, at least 11 doctors, 35 nurses, and four medical technologists from Cebu were sent to Metro Manila on Wednesday to augment the hospital workforce in critical areas in the national capital, and the provinces of Bulacan, Cavite, Laguna and Rizal.

In Eastern Visayas, at least 15 nurses and a doctor also left for Manila on Wednesday.

“As health workers, we have a moral obligation to help those who are in despair. We are ready to respond 24/7,” said Dr. Exuperia Sabalberino, director of the DOH in Eastern Visayas.

“There is a higher call for each one of you and I’m sure God will bless you in some other ways. We will be praying for your safety,” she added.

Dr. Shiena Ann Legaspi, the lone doctor of the group, said she was happy to respond to the call of the national government to help their counterparts in Metro Manila.

“While I am a little bit nervous, I am still happy to serve during this time of pandemic,” she said.