Evil on trial: 60th anniversary of Eichmann in the dock 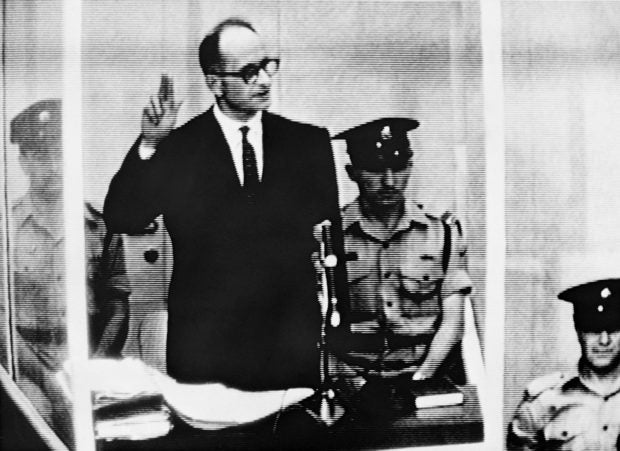 Nazi leader and war criminal Adolf Eichmann takes oath on May 5, 1961, during his trial in front of an Israeli Court in Jerusalem. He was sentenced to death and executed in Jerusalem on May 30, 1962. AFP PHOTO (Photo by AFP)

Paris, France — For four months in 1961, the barbarism of Nazi Germany was focused on the gaunt bespectacled figure of Adolf Eichmann, standing alone in a dock in Jerusalem.

His trial, one of the most charged in history, became a focus for the Jewish people to mourn the Holocaust while also raising difficult questions about the nature of evil and individual responsibility in war crimes.

Here we look back at AFP’s reporting of the trial, which began on April 11, 1961, and concluded with Eichmann’s hanging a year later.

The rather unprepossessing 55-year-old, who had organized the logistics of the Final Solution that sent some six million Jews to their deaths, appeared behind bulletproof glass following proceedings through headphones.

His dramatic journey to Jerusalem had already been played out in the world’s media. He had been abducted a year earlier by Mossad agents in Argentina, where he had lived under a false name like many other Nazis.

For 316 days after his capture, Eichmann was held in secret in a special prison in the north of Israel, before he was transported to Jerusalem where the world press had flocked to cover the trial. 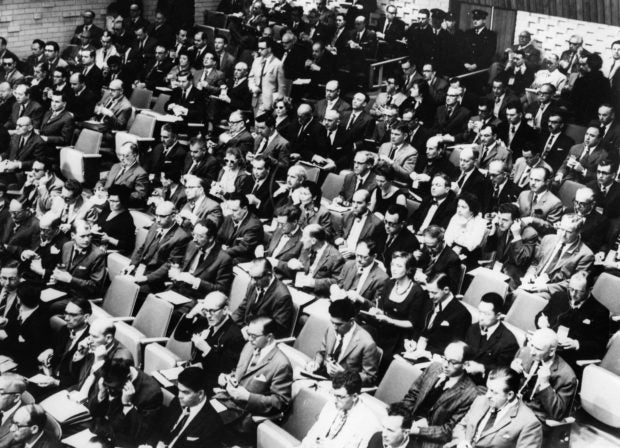 The accused was “dressed in a black suit… his eyes looking off into the distance behind big glasses,” AFP journalists reported.

His complexion was grey, his lips shut as he listened impassively to the German translation of the 15 charges against him.

Every one of the 700 seats in the huge courtroom was occupied.

Observers, diplomats, and some 450 journalists had gathered to see Eichmann, dubbed the “engineer of death,” who had been responsible for organizing the flow of convoys and distribution of deportees to the death camps across Europe.

“We expected a kind of monster, given the scale of his crimes, but Eichmann just looked like some little civil servant,” Marcelle Joseph, who recorded the whole trial and then typed up the translation, told AFP in 2011.

But for her, the real horror did not come from the man in the glass cage — “mediocre, pathetic even” — but from the harrowing testimonies. 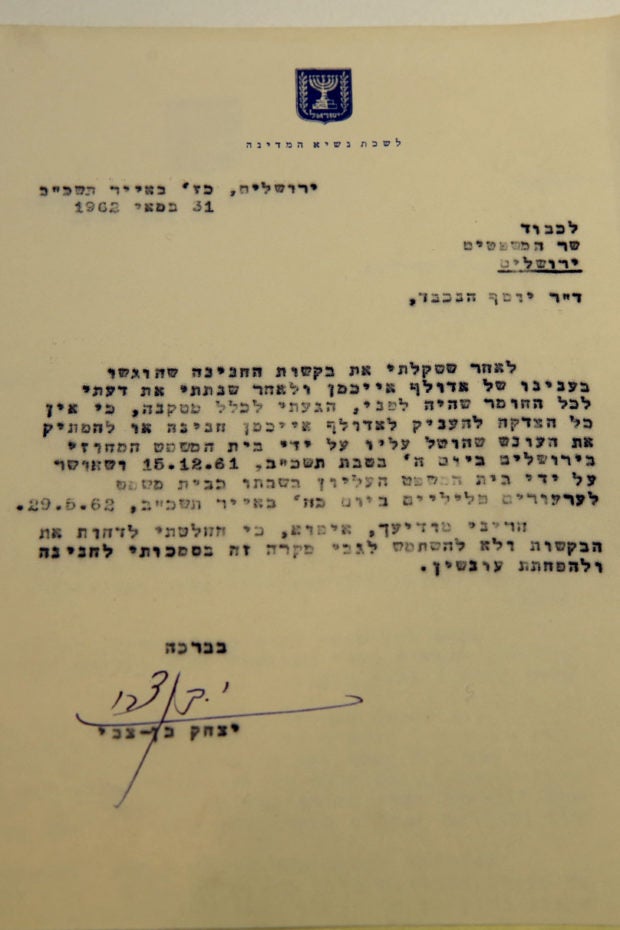 A picture taken on January 27, 2016, shows a document from the archives of the Israeli President’s Office Legal Department which is part of the file of Nazi war criminal Adolf Eichmann which is presented to the public during a ceremony marking 55 years since Eichmann’s trial at the occasion of the International Holocaust Remembrance Day at the presidential compound in Jerusalem. – The document is the reply that Israeli serving president Yitzhak Ben Zvi made to Eichmann following his plea for clemency for his role in the Holocaust, just two days before he was executed. The letter reads in Hebrew: “after considering the pardon requests made on behalf of Adolf Eichmann and after having reviewed all the material presented to me, I came to the conclusion that there is no justification in giving Adolf Eichmann a pardon or easing the sentence imposed on him by the Jerusalem District Court on Thursday, 15th December 1961, and approved by the Supreme Court sitting as a Court of Criminal Appeals on the 29th May 1962. I am writing to inform you that I have decided therefore to reject the requests and not to use my authority to pardon on reduce the penalty for this case.” (Photo by GALI TIBBON / AFP)

In all, 111 witnesses took the stand one after the other over the four months and three days of the trial, each delivering terrible personal accounts to the world’s cameras, including renowned writers like Elie Wiesel and Joseph Kessel.

One survivor told how he was led with more than a thousand Jews to a pit in Poland where a Nazi officer told them to kneel down.

They were all ordered to undress and then shot, right on the edge of their open grave.

A survivor from the Treblinka death camp described the agony of the gas chambers where victims were so tightly packed that even the dead remained standing up and families died clutching each others’ hands.

Eichmann insisted he was being sentenced for the deeds of others and did not take personal responsibility for the crimes.

He was just following orders, he said.

For the philosopher Hannah Arendt who sat through the trial, Eichmann was a disturbingly underwhelming war criminal — the epitome of the “banality of evil” as she later put it in an acclaimed book. 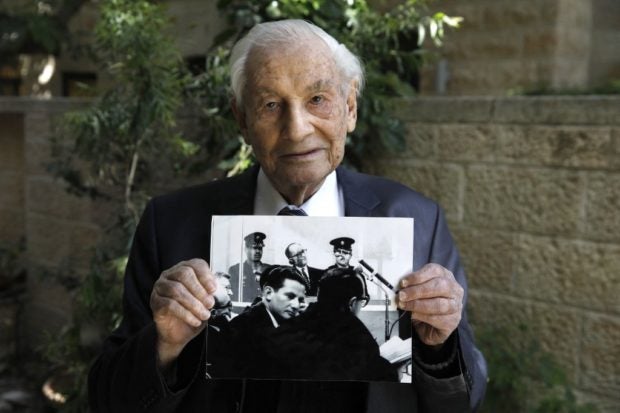 Gabriel Bach, 93, a former judge of the Supreme Court of Israel and a former deputy prosecutor in during the trial of top Nazi German official Adolf Eichmann, poses for a picture while holding a photograph showing him (below) during Eichmann’s (top) trial, at the yard of his home in Jerusalem on May 3, 2020. – Days after Israel announced that Eichmann had been arrested and brought to the country for trial, Bach — then serving as deputy state attorney — was given an assignment that permanently altered his life. Bach was Israel’s deputy state attorney when, 60 years ago this month, the world learnt that a key architect of Adolf Hitler’s “Final Solution” to exterminate Europe’s Jews had been seized by an Israeli Mossad team of secret agents in Argentina. (Photo by MENAHEM KAHANA / AFP)

“Eichmann was guilty of terrifying crimes, different from all crimes against individuals insofar as it was the extermination of a whole people,” Supreme Court President Moshe Landau told the packed courthouse.

“For many years, he carried out these orders with enthusiasm.”

‘I don’t feel myself guilty’

Eichmann’s lawyer Robert Servatius appealed the sentence but it was rejected.

And so too was a request for a reprieve, which Eichmann wrote in a letter to the Israeli president Yitzhak Ben-Zvi in May 1962.

“I was not a responsible leader, and as such do not feel myself guilty,” he wrote.

A few days later on May 31, 1962, Eichmann was hanged at Ramleh prison near Tel Aviv. His ashes were scattered in the sea, beyond Israel’s territorial waters.