‘Natural’ for public to look for leaders amid crisis, says Robredo 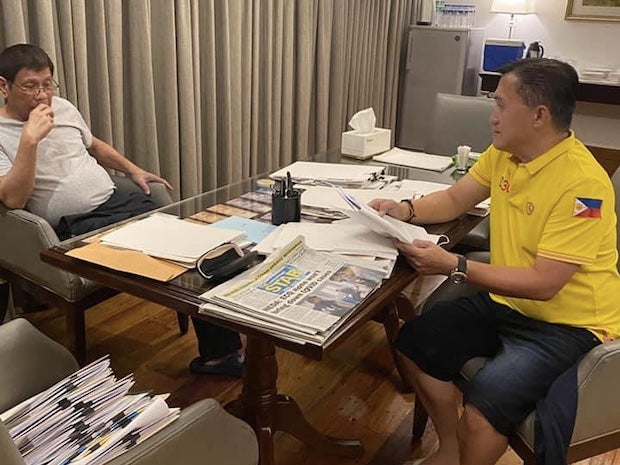 Photo posted on Facebook by Sen. Christopher Go showing him and President Rodrigo Duterte to squelch speculations about the Chief Executive’s health.

MANILA, Philippines — In a time when the country is facing a crisis, it is only “natural” for “people to look for their leader” and be assured that “everything is under control,” Vice President Leni Robredo as Filipinos took to social media to question the whereabouts of President Rodrigo Duterte.

“Nakikita ko naman siya sa social media pero para sakin…in crisis situations, kahit hindi presidente, kahit nga mayor, ‘pag may nangyari sa lugar mo, people wait for the mayor to be visible, to say that ‘everything is alright. We’re on top of the situation. This is what we’re doing.’ Assurance na everything is under control,” Robredo said in an interview over ABS-CBN News Channel on Friday.

(I see him on social media but for me…in crisis situations, it’s not just in the case of the president, even mayors, if something is happening in their area, people wait for the mayor to be visible, to say that ‘everything is alright. We’re on top of the situation. This is what we’re doing.’ Assurance na everything is under control.)

She was asked to comment on questions being asked by Filipinos online about the whereabouts of the President and the condition of his health after his regular public addresses were canceled twice this week.

(If there’s no assurance, the public gets stressed out. They would constantly ask ‘where are we heading? Can we still hold on? I think that’s where it is all coming from.)

(There’s a basis for them to look for him because that’s the way it is, not only for the president, even governors, mayors, when something is happening, it’s the natural instinct for people to look for their leader.)

On Wednesday, the hashtag #NasaanAngPangulo trended on Twitter as Filipinos questioned the absence of Duterte from the public eye.

In an effort to dispel speculations on his health, his long-time aide and now Senator Christopher “Bong” Go, posted what he said were recent photos of the Chief Executive.

Robredo, meanwhile, underscored the need for someone to take the lead in the government’s pandemic response even if it’s not the President.

“Kung hindi si presidente yun, there has to be somebody na…yung ginagawa niya lang, parang conductor sa orchestra, he doesn’t play the instruments but he’s the one who’s putting an order in a lot of things,” Robredo added.

(But even if it’s not the President, somebody has to be the conductor of the orchestra, he doesn’t play the instruments but he’s the one who’s putting an order in a lot of things.)

“Yun yun nakikita ko na kulang ngayon kasi [That’s what is lacking right now because] in fairness to everyone, everyone is working. Everyone is exhausted already,” she further said.

On Thursday, the Philippines logged 9,216 additional infections, pushing the total active cases to 167,279. The total number of confirmed COVID-19 cases in the country is 828,366.