DOH suspends use of AstraZeneca on people below 60 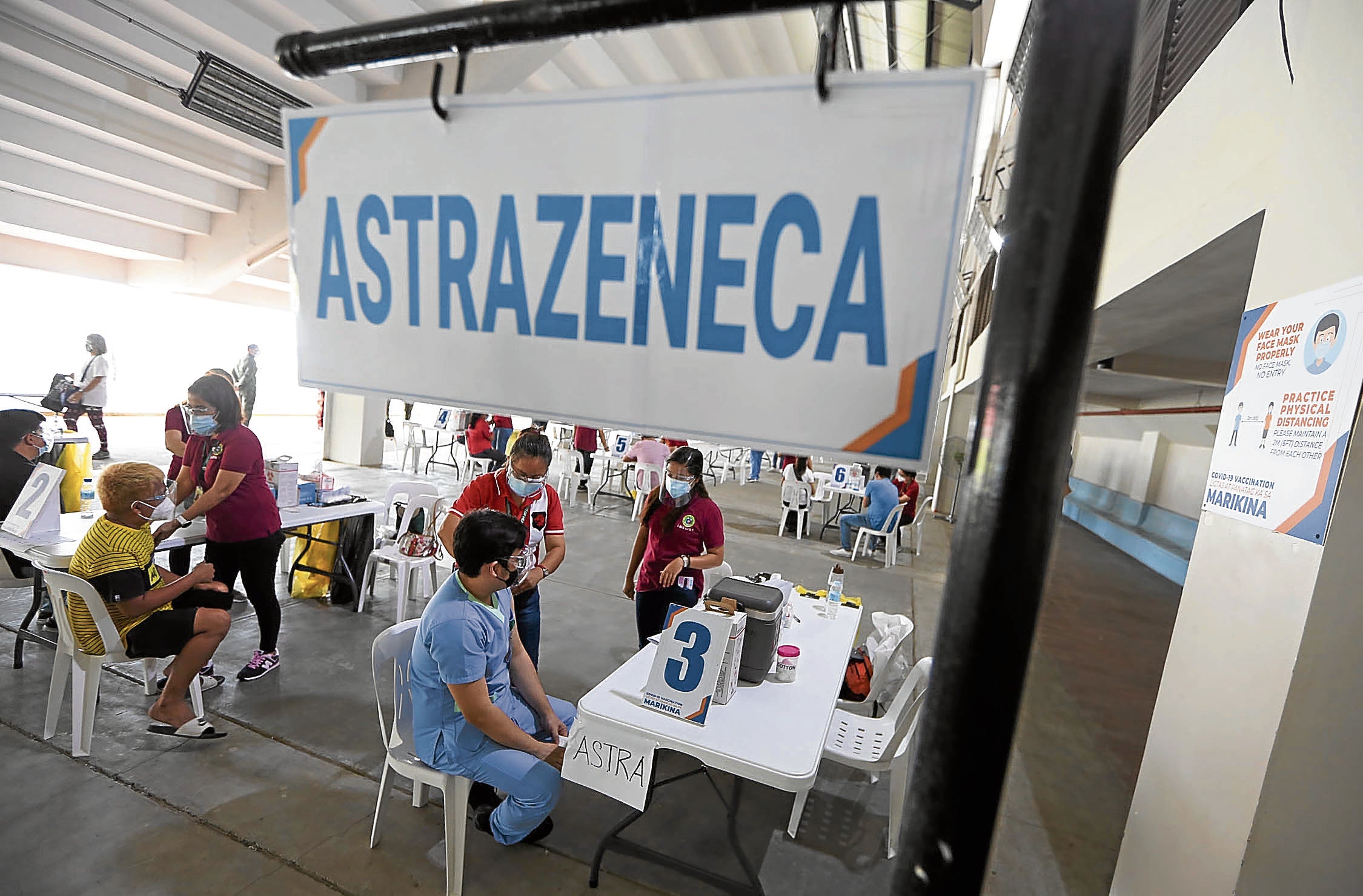 FOR REVIEW  – Reports of rare cases of blood clots on some people who received the AstraZeneca vaccine prompted the Department of Health to suspend its use on those aged 60 and below. No such incidents have been reported in the Philippines and health authorities area waiting for a review of the vaccine by local experts and guidance from the World Health Organization. —NIÑO JESUS ORBETA

The Department of Health (DOH) on Thursday said it was temporarily halting the use of the AstraZeneca vaccine on those aged 60 and below, following the recommendation of the Food and Drug Administration (FDA).

The recommendation was due to concerns over recent reports of rare cases of blood clots with low platelets detected in some individuals inoculated with the vaccine in other countries.

FDA Director General Eric Domingo, however, said the suspension was just a precaution.

“I want to emphasize that this temporary suspension does not mean that the vaccine is unsafe or ineffective—it just means that we are taking precautionary measures to ensure the safety of every Filipino,” Domingo said.

“We continue to underscore that the benefits of vaccination continue to outweigh the risks and we urge everyone to get vaccinated when it’s their turn,” he said.

The Vaccine Expert Panel (VEP) was not consulted regarding this decision, according to panel member and infectious disease expert Dr. Rontgene Solante.

Of the 525,600 AstraZeneca vaccine doses the Philippines received from the COVAX facility on March 4 and March 7, only 31,912 were left and had not been administered as of Thursday, the National Vaccination Operations Center said.

Many of those who received AstraZeneca are health-care workers who are now waiting for their second shot.

“I’m not aware yet if those who received the first dose can’t receive the second dose. [But] they should,” Solante said.

Domingo said that the FDA was aware of the recommendation of the European Medicines Agency (EMA) to list blood clots as a rare side effect of the AstraZeneca vaccine, but there had been no such incidents in the country yet.

The FDA will await results of a review by local experts as well as official guidance from the World Health Organization (WHO).But he said that those who had received the first dose of the AstraZeneca vaccine could get the second shot, since reports of blood clots were observed only after the first dose.

Dr. Edsel Salvana, a member of the DOH Technical Advisory Group, advised those who already received AstraZeneca against taking a second shot of a different vaccine brand and “just wait for further announcement.”

The health department on Wednesday said that while the delivery of the second batch of the AstraZeneca vaccine from the COVAX facility had been delayed, WHO assured the country that it would arrive in time for the second dose of those who were inoculated in early March and April.

Health Undersecretary Maria Rosario Vergeire earlier said the gap between the first and second doses of the AstraZeneca vaccine could be as long as 12 weeks.

Domingo assured the public that the FDA would complete its review of the vaccine date “before the schedule of the second dose.

He also said the FDA was allowing the use of the CoronaVac vaccine made by the Chinese company Sinovac Biotech on senior citizens 60 years old and above.

But those with acute illnesses, high blood pressure or hypertensive emergency will not be allowed to get the shot, he said.

He said that in “smaller studies” in Brazil covering 400 senior citizens, “they saw an estimated efficacy rate that is about 51 to 52 percent.”

He noted that WHO considered a 50 percent efficacy rate for a vaccine to be acceptable.

“But the study is a bit small so we could not determine if the actual efficacy rate is higher,” he said at Thursday’s Laging Handa briefing.

Domingo said about 700 health-care workers 60 and older received CoronaVac after signing a waiver, and the adverse events they experienced were within the usual limits seen in other vaccines.

The DOH on Thursday reported that new cases again topped the 9,000 mark.

It said 598 patients had recovered, bringing the total number of survivors to 646,968. However, 60 died, increasing the country’s death toll to 14,119.The deaths and recoveries left 167,279 active cases, the highest ever recorded since the pandemic began. The previous all-time high was 165,715, on April 3.

After validating the numbers, the health department removed 14 from the total case count and reclassified 28 recoveries as deaths.

DOH data showed that 63 percent of the country’s intensive care unit beds were occupied, but the number of occupied beds in the National Capital Region, which has been hard hit by the pandemic, was significantly higher at 81 percent.

The DOH said 45 percent of all mechanical ventilators nationwide, including 60 percent of those in the capital, were being used. —WITH REPORTS FROM LEILA B. SALAVERRIA AND MARICAR CINCO

Read Next
Gov’t looks at partially reopening ‘NCR Plus’ in phases
EDITORS' PICK
Kai Sotto continues to inspire Filipinos by sharing his passions and stories with Smart Prepaid
1Sambayan to nominees: Stick to word of honor
Alex Eala wins Grand Slam on Independence Day: ‘I hope I made my contribution to the country’
Ahead of ONE: Full Blast II, Mongkolpetch warns Elias Mahmoudi: ‘Watch out for my fists’
Trust Robredo’s political instincts – Kaya Natin! convener
EDITORIAL: Good news, bad news
MOST READ
China cautions G7: ‘small’ groups don’t rule the world
1Sambayan to nominees: Stick to word of honor
Duterte, Mayor Sara unlikely to run under same slate in 2022, says Lacson
Leni vs. Sara
Don't miss out on the latest news and information.