SILENT HOMAGE  – In this photo taken in 2019, photographs of war veterans who liberated Baguio City from the Japanese in 1945 are exhibited at City Hall to remind people of their heroism. —VINCENT CABREZA

BAGUIO CITY—Homegrown soldiers and guerrillas helped the Allied Forces in liberating the Cordillera from the Japanese during World War II but only 69 of them are alive to witness how the country will honor them in this year’s Araw ng Kagitingan (Day of Valor).

Of the surviving war veterans, 23 are centenarians, including the oldest, 103-year-old Sixta Pavila. The youngest living veteran is 98 years old, according to Helen Boquirin, secretary of the local association of the veterans’ sons and daughters, in a briefing on Thursday.

The Philippine Veterans Affairs Office has no available data as to how many Cordilleran soldiers fought the Japanese, but its records show 250 war veteran spouses. It is not also known how many of these spouses are still alive.

Fourteen of the surviving veterans live in Benguet province and belonged to the 66th Infantry Regiment, a crack team of Cordilleran soldiers who provided intelligence and conducted ambush operations against the Japanese Imperial Army during the war years in the early 1940s. Others are based in Abra and Mountain Province, Boquirin said.

Most of them and their families have lobbied in Congress to increase their allowances and pensions, currently pegged at P20,000 a month.

Their heirs, meanwhile, have concentrated on sustaining their legacies by making sure that Araw ng Kagitingan events are celebrated yearly, even if only through online platforms because of health restrictions on mass gatherings during the pandemic. No celebrations are scheduled here on Friday.

“We try to keep liberation days alive because that’s the only memory we have of [our heroes],” Boquirin said.

Araw ng Kagitingan used to be celebrated as the Fall of Bataan, which refers to the time when Filipino soldiers and the Americans under the Allied Forces were forced to participate in the Death March by the Japanese.

But in the Cordillera, celebrations remembering the veterans’ heroism began in March up to the end of April—memorials on the end of the war in the Pacific, as Allied Forces and Filipino soldiers battled to retake the country in 1945, Boquirin said.

These celebrations are held in the Benguet towns of Kapangan (March 7), Sablan (April 10) and Tuba (April 26), and Baguio City (April 27).

The liberation of the mining town of Itogon took place on April 30, 1945, and Allied Forces rescued Benguet’s capital, La Trinidad, on May 3 that year. Benguet celebrates its liberation on Aug. 15. 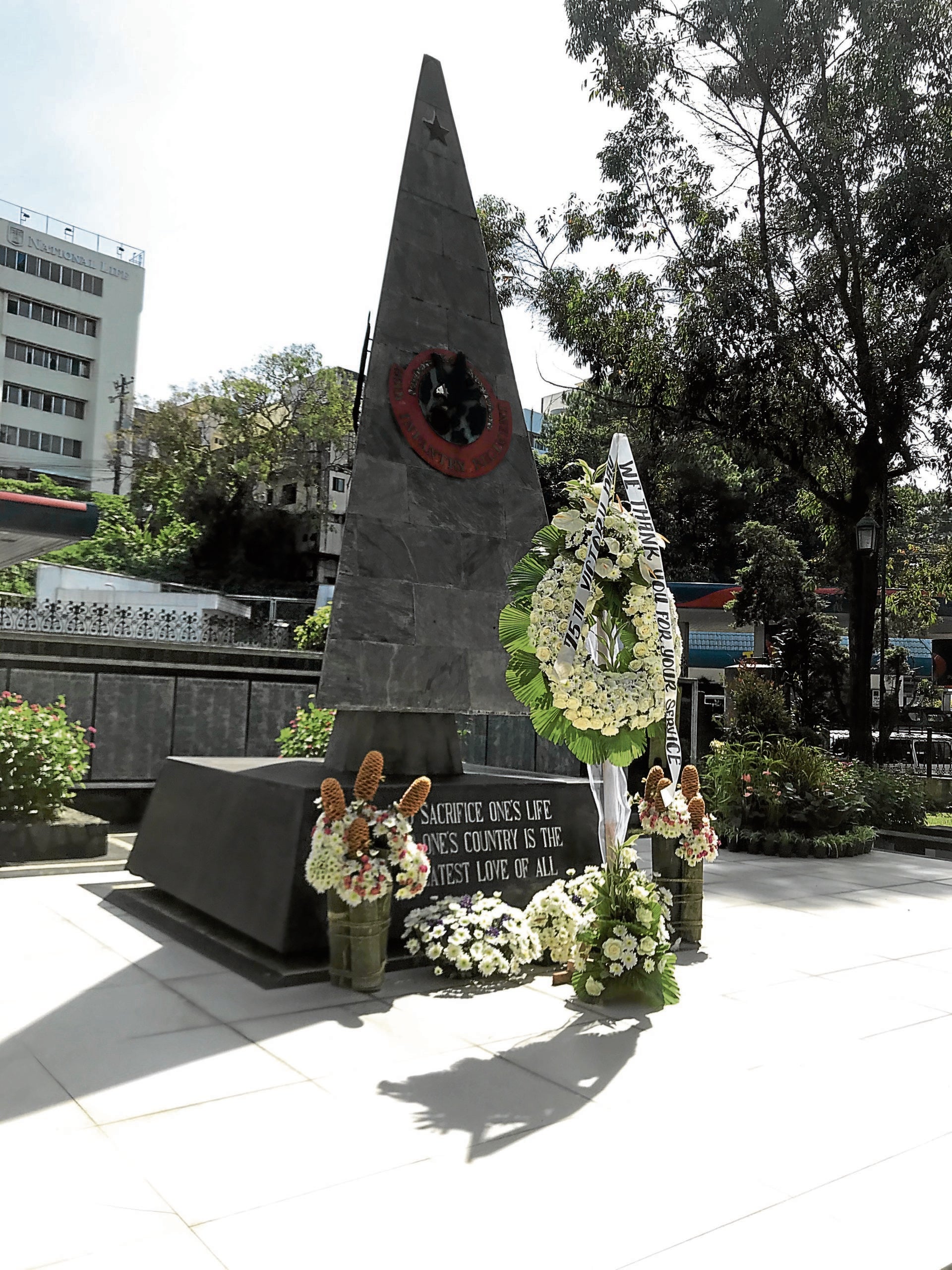 This year’s Araw ng Kagitingan in the Cordillera will be silent due to the pandemic, much like last year’s commemoration at Veterans Park in Baguio City. —VINCENT CABREZA

Boquirin said every town and city had stories about the liberation and tales of real heroes, which they could pass on to younger generations.

Dr. Emerlinda Guinaran, Benguet chapter president of group of relatives of war veterans, said these local heroes had resorted to tricks in order to defeat the enemy and survive.

She cited a story about an Ibaloy guerrilla captured by the Japanese.

“So he sang in Ibaloy, ‘Kalajo, kalajo (Come, come), there are only three here,’” she said.

The Japanese, who did not understand a word from that song, were immediately overwhelmed, Guinaran said.

Baguio was where the Pacific war began when the Japanese bombed Camp John Hay on Dec. 8, 1941, after attacking Pearl Harbor in Hawaii and brought the United States into what had been a European conflict, according to Ricardo Jose, a University of the Philippines history professor.

The city was where the war ended in Asia on Sept. 3, 1945. After surrendering in Ifugao province, Gen. Tomoyuki Yamashita signed Japan’s surrender documents at Camp John Hay.

In Bataan province, a low-key commemoration of the Araw ng Kagitingan will be held on Mt. Samat in Pilar town. The wreath laying at Shrine of Valor and messages from President Duterte and other officials will be posted on social media pages of government agencies.

No commemoration was held last year on Mt. Samat, which hosted 3,000 to 4,000 people, including surviving veterans and their relatives, government and military officials, and diplomats, during past commemorations. —WITH A REPORT FROM GREG REFRACCION