Kiko to NICA: Leave gov’t workers alone; focus on ‘communists’ in our reef 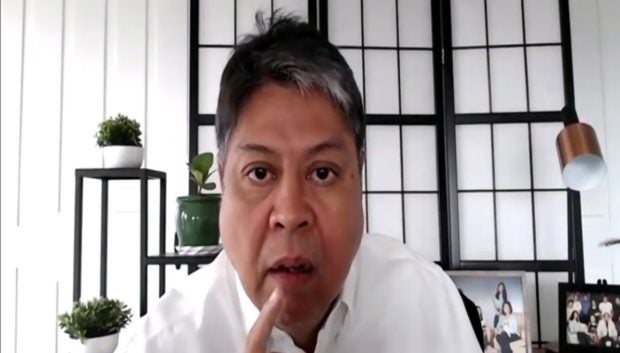 Sen. Francis “Kiko” Pangilinan, during one of the hybrid plenary sessions at the Senate in March. Screen grab / Senate PRIB file photo

MANILA, Philippines — The country’s intelligence agency should shift its focus on the “communists” who are “occupying” the Julian Felipe Reef in the West Philippine Sea instead of going after government employees, Senator Francis Pangilinan said Thursday.

(They should focus on the communists occupying Julian Felipe Reef. That issue should be the one taking up their time, right?)

(Why is that? They go after the small people but the powerful who are occupying the Julian Felipe Reef, what happened?)

The Department of Foreign Affairs (DFA) has demanded that China withdraw the vessels from the area, which Manila maintained is within the Philippines’ exclusive economic zone.

Beijing, however, insisted that the reef is part of Nansha Qundao, one of two political districts in the South China Sea established by the Chinese government in 2020. It said the ships are fishing vessels taking shelter due to bad weather.

(It’s saddening…There have been 4 million Chinese nationals who entered the country since 2017, and yet they are focusing on government employees.)

Earlier, National Intelligence Coordinating Agency (NICA) Director General Alex Monteagudo posted on Facebook that Senado, an affiliate of red-tagged government workers’ union Courage, has been “the eyes and the ears” of the Communist Party of the Philippines, the New People’s Army, and the National Democratic Front (CPP-NPA-NDF) in the Senate.

(I wish they would have given us intelligence information about what China is doing at the Julian Felipe Reef.)

Senado has already slammed as “baseless and malicious” allegations made by Monteagudo.

The minority bloc in the Senate, which Pangilinan is a part of, also earlier condemned the red-tagging of the union, saying such claims are “dangerous.”

“We strongly condemn the red-tagging of the union of Senate employees and we vehemently denounce government officials who continue to label, brand, vilify, and harass individuals and organizations such as Senado as state enemies and subversives,” they said in a joint statement.