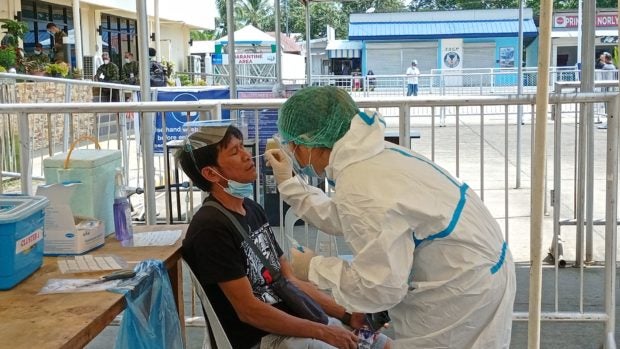 A health employee of the Pagadian City government swabs a passenger from Manila on April 7 for coronavirus disease testing before entering the city. The test is provided free by the local government. Photo by Leah D. Agonoy, Inquirer Mindanao

MANILA, Philippines — Active COVID-19 cases in the country rose to 167,279 on Thursday following the detection of 9,216 additional infections.

Data from the Department of Health (DOH) showed there were also 598 patients who have recovered, raising the number of recoveries to 645,968, or 78.1 percent of all COVID-19 cases in the country.

Total COVID-19 cases in the Philippines has reached 828,366, including 20.2 percent that are active cases, since the first infection was recorded in January last year. Of the active cases, 98.8 percent are mild and asymptomatic.

Meanwhile, 20.8 percent of the 39,969 people who were tested yielded positive test results.

The DOH said 14 duplicate entries, including six recoveries, were removed from the case count, while 28 cases that were initially reported as recoveries are now counted as deaths after validation.

The new figures exclude data from five laboratories that were not able to submit their results on time.

In its monitoring report on Wednesday, OCTA Research which monitors the trends of COVID-19 in the country said that the number of cases in virus epicenter Metro Manila rose by “just 3 percent” in the past week. The group, however, noted that the region was averaging 24,000 tests per day, which is 17 percent lower than the preceding week’s average.

The DOH also earlier said that the decrease in new cases in the previous days is “artificial” since a number of testing laboratories were not operational recently.

Seventy-seven percent or 1,936,600 of the available 2.5 million vaccine doses in the country have been distributed across 2,670 vaccination sites.