Ex-VP Pence to pen memoir ahead of 2024 race—publisher 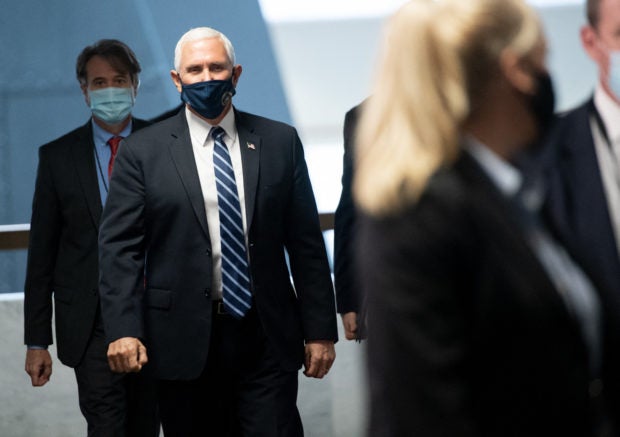 In this file photo taken on November 10, 2020 US Vice President Mike Pence arrives for the weekly Senate Republican lunch on Capitol Hill in Washington, DC. Mike Pence has inked a deal to write an autobiography addressing his time as US vice president in the Trump administration, publisher Simon & Schuster said April 7, 2021 regarding a two-book contract reportedly worth at least $3 million. Photo by SAUL LOEB / AFP

WASHINGTON — Mike Pence has inked a deal to write an autobiography addressing his time as US vice president in the Trump administration, publisher Simon & Schuster said Wednesday regarding a two-book contract reportedly worth at least $3 million.

Pence, 61, is a conservative Republican widely believed to be considering a presidential run of his own in 2024, and a pre-election memoir would fulfill a step traditionally taken by American politicos mulling higher office.

“Vice President Pence’s life and work, his journey as a Christian, the challenges and triumphs he has faced, and the lessons he has learned, tells an American story of extraordinary public service during a time of unrivaled public interest in our government and politics,” Dana Canedy, senior vice president and publisher of Simon & Schuster, said in a statement.

The currently untitled work, according to the publisher, will cover Pence’s faith and public service, including his stint as a US congressman, his rise to become the governor of Indiana, and his return to Washington as the number two official in the land.

Pence, expressing gratitude at the opportunity to tell his life story, said he looks forward to the chance “to invite readers on a journey from a small town in Indiana to Washington, DC.”

Simon & Schuster said the contract was a two-book deal, with the first volume tentatively scheduled for publication in 2023.

Two people in the publishing industry said Pence’s deal is worth between $3 million and $4 million, CNN reported.

Pence has largely been on the political sidelines since he and Trump lost the November election to now-President Joe Biden and Vice President Kamala Harris.

Pence came under withering attack from Trump early this year as the president pressured his deputy to thwart final certification of the election results.

Pence defied Trump, saying on January 6 — the same day that a pro-Trump mob ransacked the US Capitol — that he would not intervene to stop the certification.