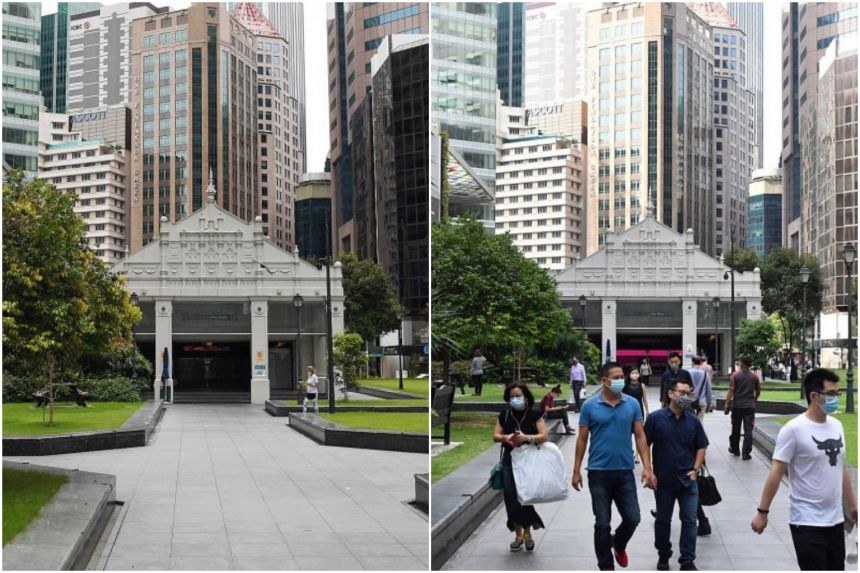 SINGAPORE — People here have been socializing less and working more since the circuit breaker last year, a survey has found.

It noted that 61 percent of the 1,000 respondents said they now socialize less frequently with those outside their immediate family than before the restrictions were put in place in April last year.

Forty-four percent also reported that their social circles outside of their immediate family had shrunk over the past year.

The online poll of residents aged 16 and older, which was commissioned by The Straits Times, noted that 27 percent reported growing closer to their family, while 7 percent said they were no longer as close.

The circuit breaker included a ban on dining in at eateries, curbs on people leaving their homes except for essential reasons and the closure of workplaces and schools.

Restrictions have since been eased slowly, although major life events and festivals are still much more muted affairs than before.

Associate Professor Tan Ern Ser from the sociology department at the National University of Singapore’s Faculty of Arts and Social Sciences said if anything, people should socialize more, not less, as maintaining and expanding their social networks bring benefits such as social support and information sharing.

However, he added that the pandemic has set the conditions for those who do less of it.

Some may have become used to keeping in touch via digital means rather than meeting in person, while others have got busier as a result of increased workloads owing to working from home and cannot meet colleagues as they are not back in the office.

The year since the circuit breaker began on April 7 has seen many other changes as well, noted the survey, which was carried out by Milieu Insight from March 25 to 29.

About 60 per cent of people picked up a new skill or hobby, with 94 per cent of that group saying they were still pursuing or using at least some or a few of them today.

People also reported increased digitalization in their lives. Almost two-thirds said they were now more likely to use cashless payments and 46 percent reckoned they were more likely to order food delivery rather than go for other dining options.

Prof Tan said a poll finding that 52 percent of those employed felt their workload had increased since the circuit breaker began could be due to a reduction in headcounts or working from home blurring the boundary between work and non-work time.

This could have resulted in a stronger pressure to respond to e-mails immediately at any time of the day.

He added that people may feel the need to work harder to overcompensate for the lack of “face time”, which some bosses prefer. 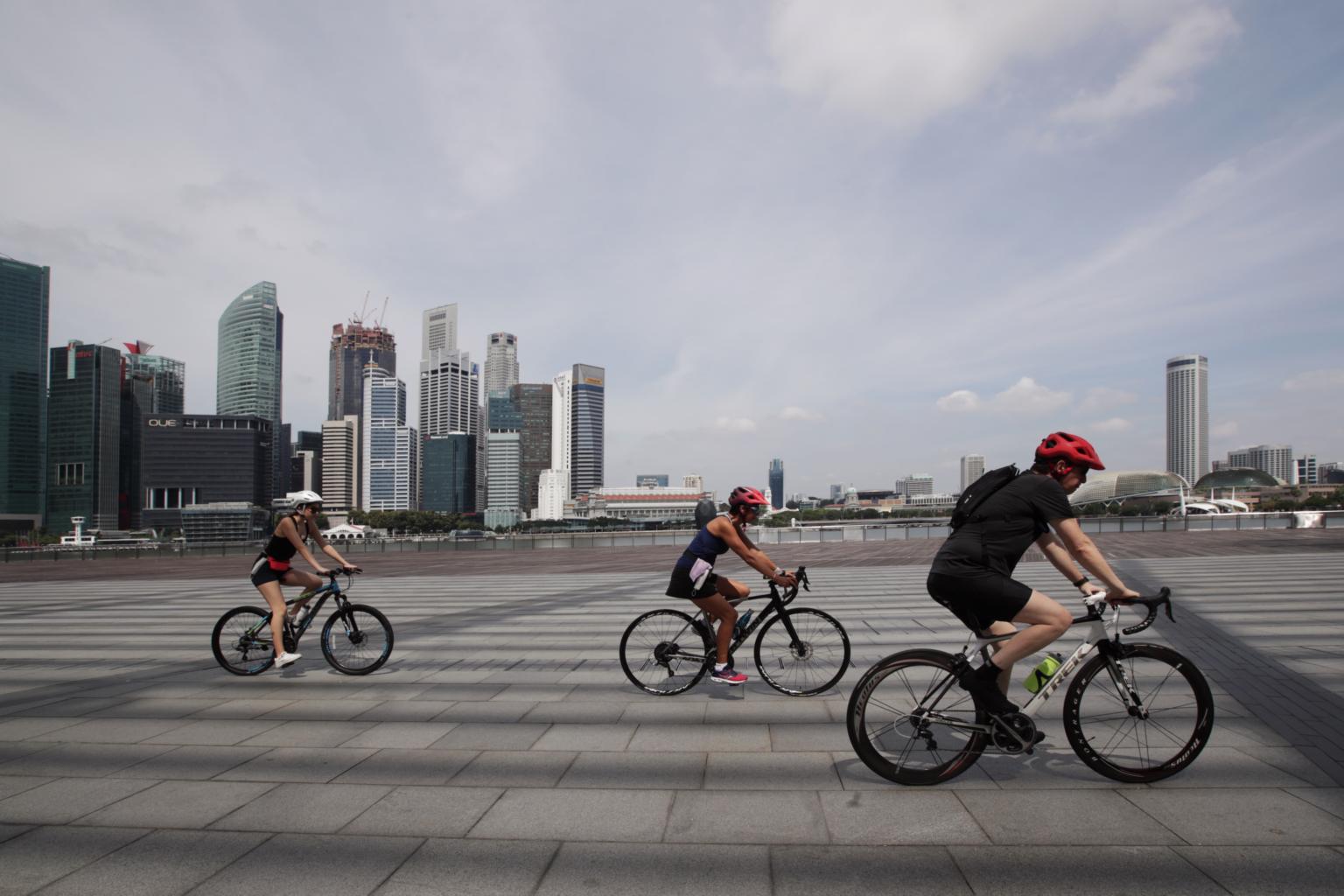 About 60 per cent of people picked up a new skill or hobby during the circuit breaker. ST PHOTO: GIN TAY

“If these mean no work-life balance, then it’s a bad thing,” said Prof Tan.

He added: “I think the increasing pace of work life was already happening before the pandemic.

“The pandemic merely makes it worse – and I can’t see returning to pre-pandemic levels, especially if there are lower headcounts, and more traveling to and from work and business travels involved.”

Over one in three saw decline in mental well-being

The poll unearthed other downsides as well – 36 percent saying their mental health had worsened.

Mental health has been under the spotlight since the pandemic started and the survey found that 31 percent reported their mental well-being had “somewhat worsened”. Five per cent said it had worsened “much more”.

In October last year, the Government convened a Covid-19 Mental Wellness Taskforce in response to the needs of Singaporeans arising from the pandemic.

In March, it was announced that the task force would be transformed into an inter-agency platform to oversee mental health and well-being efforts beyond the pandemic.

The head of the task force, Professor Chua Hong Choon, declined to comment specifically on the finding in which 36 per cent of respondents in the survey acknowledged that their mental well-being had worsened.

But he said that generally, there were several reasons why people’s well-being may have worsened since the circuit breaker.

“Humans are social animals and the circuit breaker heightened our loss of social connectedness, affecting people of all ages,” said Prof Chua, who is also deputy group chief executive officer (clinical) of the National Healthcare Group.

He said working adults may have seen relationships with colleagues fray and stress levels rise due to work-from-home arrangements. “The social aspect of work was lost, teams were not able to bond and people were stressed out by technical issues at home,” said Prof Chua. 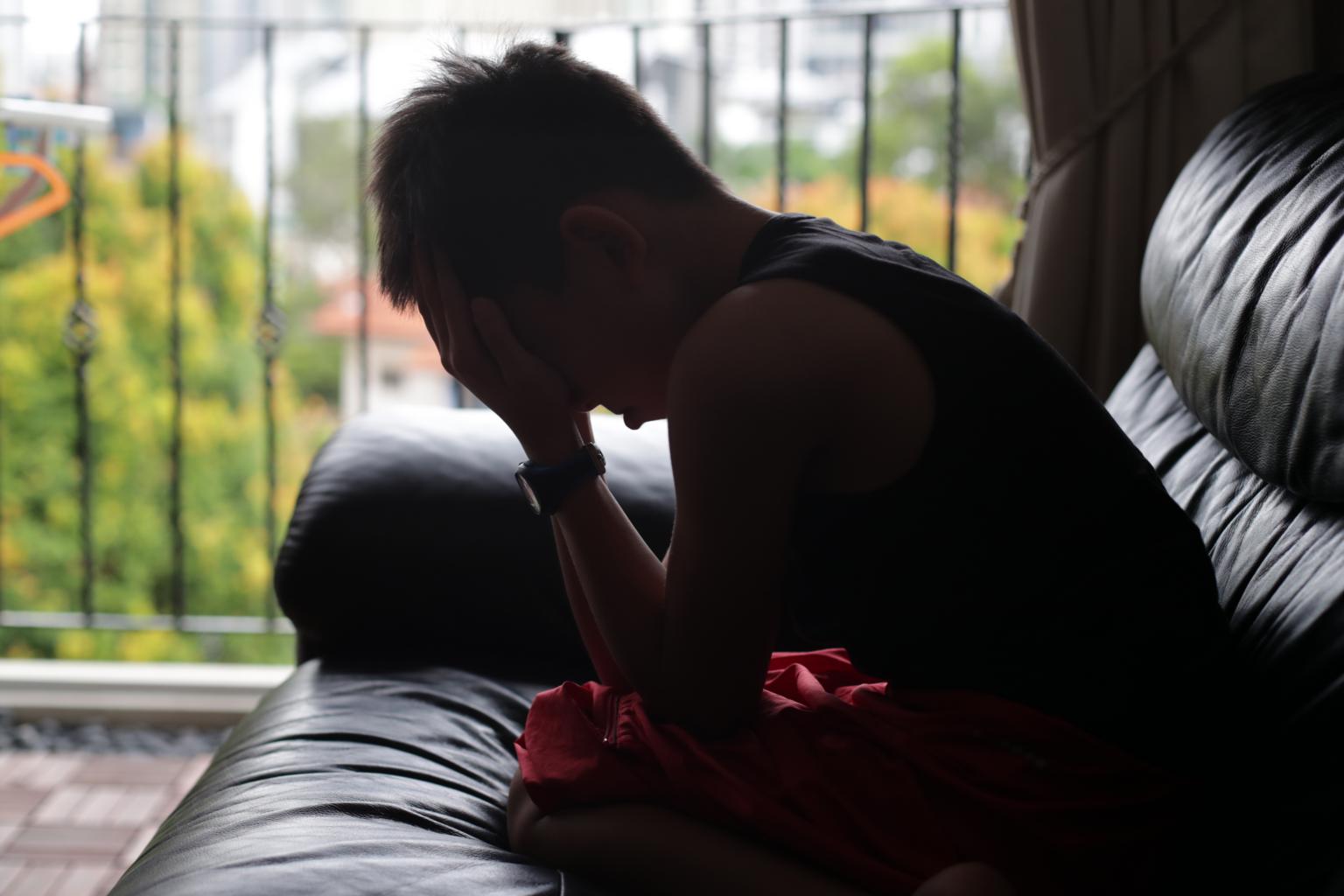 Mental health has been under the spotlight since the pandemic started. PHOTO: ST FILE

Seniors could have experienced a sense of isolation because extended family members were unable to visit and they could not meet their friends regularly.

“The disruption to our economy also affected the livelihoods and career opportunities of many residents, although timely support by the Government has helped to cushion the impact,” he added.

While the task force had previously presented plans to help tackle the issue, Prof Chua said that there were things people could do to help one another.

In addition to looking out for one another’s well-being, people could consider volunteering or participating in community mental health events to learn more about mental health issues, and encourage others to do so as well, he said.

“In our daily lives, let’s empathize and appreciate that many people are going through challenging periods. Be more understanding if there are delays, or things don’t go as smoothly as before. Be kinder, more thoughtful, more patient,” he added.

More complying with measures despite pandemic dragging on

The poll also revealed that while the pandemic has gone on longer than most people anticipated, even more people are willing to follow safe management measures than they were a year ago.

Almost 80 per cent of respondents felt the pandemic would have ended by now.

The survey also found a high level of confidence in Singapore’s handling of the outbreak, with 24 percent strongly agreeing that the country has the pandemic under control while 53 percent somewhat agreed. The remaining 23 percent either indicated a neutral response or disagreed with this sentiment.

But rather than being complacent, 62 percent said they were now more likely to wear their masks properly than during the circuit breaker period. 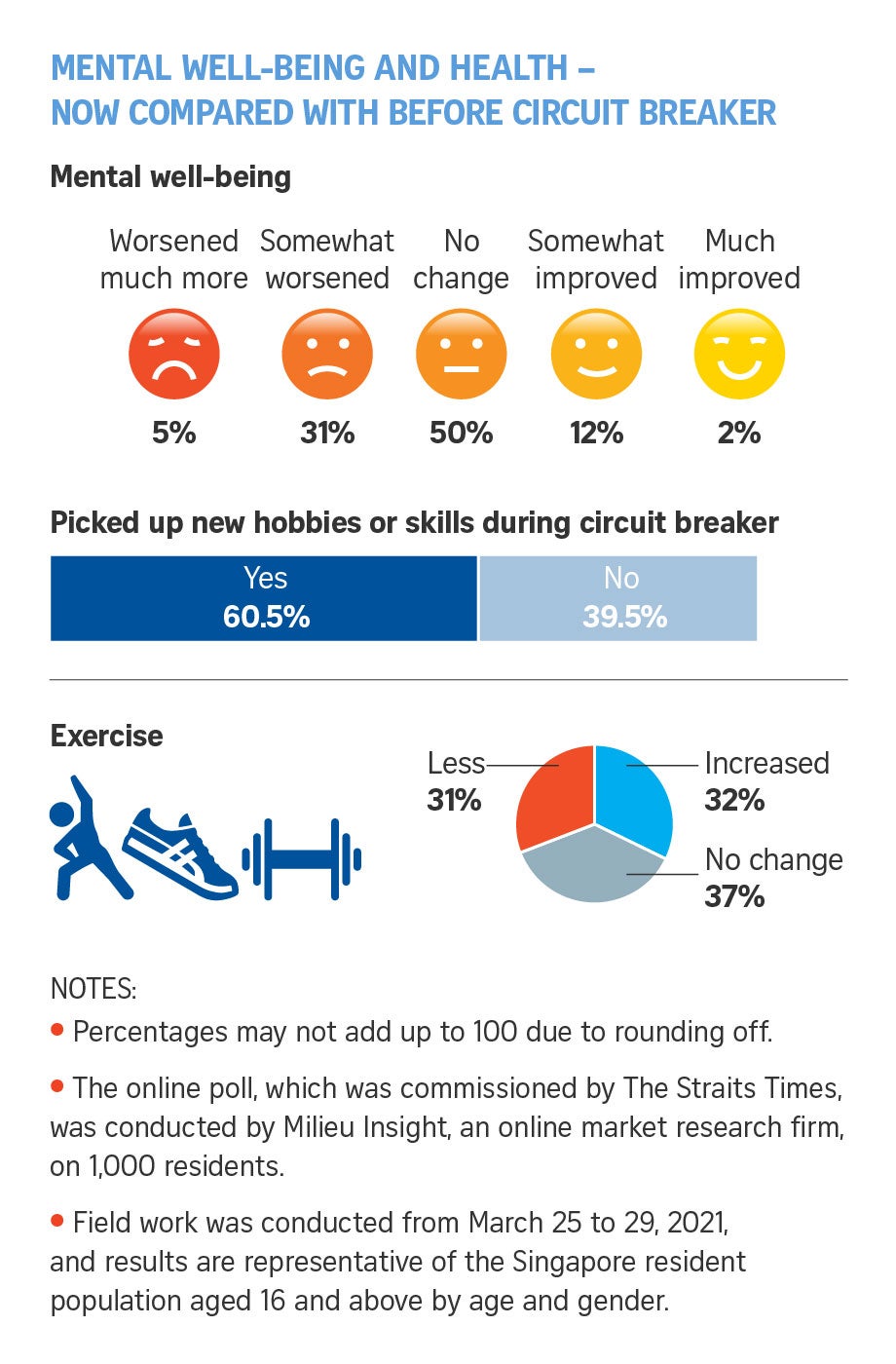 Similarly, 54 percent were more likely to observe a 1m safe distance from others now than a year ago while 34 percent said there was no change in their likelihood of doing this.

The poll also noted that 35 percent said they were now more likely to see a doctor for only mild symptoms while 44 percent said there was no change in their likelihood of doing this.

The notion that safe management measures are excessive and should be relaxed was rejected by 39 percent, while 24 percent agreed.

This was in contrast to a survey conducted by ST last August, which found that 44 percent of people were getting tired of following health measures.

Associate Professor Hsu Li Yang, the vice-dean (global health) and program leader (infectious diseases) at the NUS Saw Swee Hock School of Public Health, pointed out that last August, there was no obvious end in sight for safe management measures.

But with vaccines now being rolled out, people can more clearly see that restrictions will likely be relaxed in the near future.

He added that pandemic fatigue is more likely to occur based on cultural factors, uncertainty and multiple episodes of stepping up or down of restrictions.

But since the circuit breaker, Singapore has generally not experienced the need to ramp up safe management measures and instead has progressively relaxed them.

“That gives most people the motivation to tolerate and adapt to existing measures for a longer period,” said Prof Hsu. 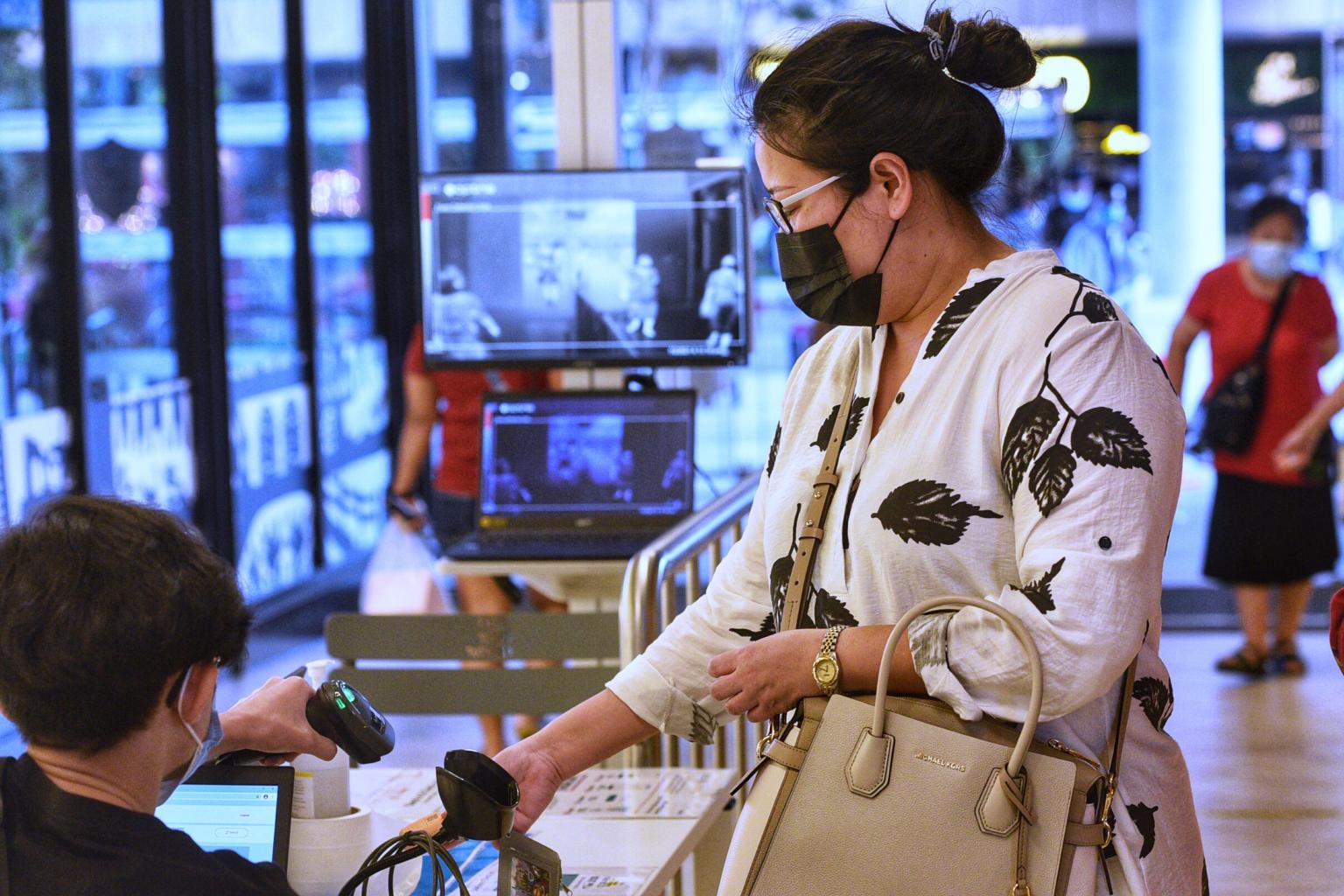 Almost 80 per cent of respondents felt the pandemic would have ended by now. ST PHOTO: DESMOND WEE

He said: “It shows that the coordinated communications around the virus and safe management measures have had a successful impact on people.

“While there have been elements of public criticism, which is expected and necessary to have in good governance, those statistics reflect the understanding and cooperation of the people towards the measures laid out.”

Prof Car added that people could also have seen how safe management measures helped curb the spread of the virus over the past year, which may have motivated them to want to continue observing the rules.

Professor Dale Fisher from the NUS Yong Loo Lin School of Medicine’s Department of Medicine agreed. “I think there has been very responsible messaging in Singapore and a good relationship between the community and the leadership helps people understand the need to sustain efforts.

“Community engagement is arguably the most important component of any outbreak response.”

He called for people to still get tested even if they have mild symptoms, as this is key to determining if they have Covid-19 or another viral infection.

Prof Car said it might be worth examining the concerns of the 23 percent who did not feel Singapore has the pandemic under control.

“It also shows that there are no laurels to rest on – having a pandemic ‘under control’ is quite different from exiting it,” he said.

“I anticipate that to be in the next step: People would be understandably looking towards a clear pandemic exit strategy for Singapore.” 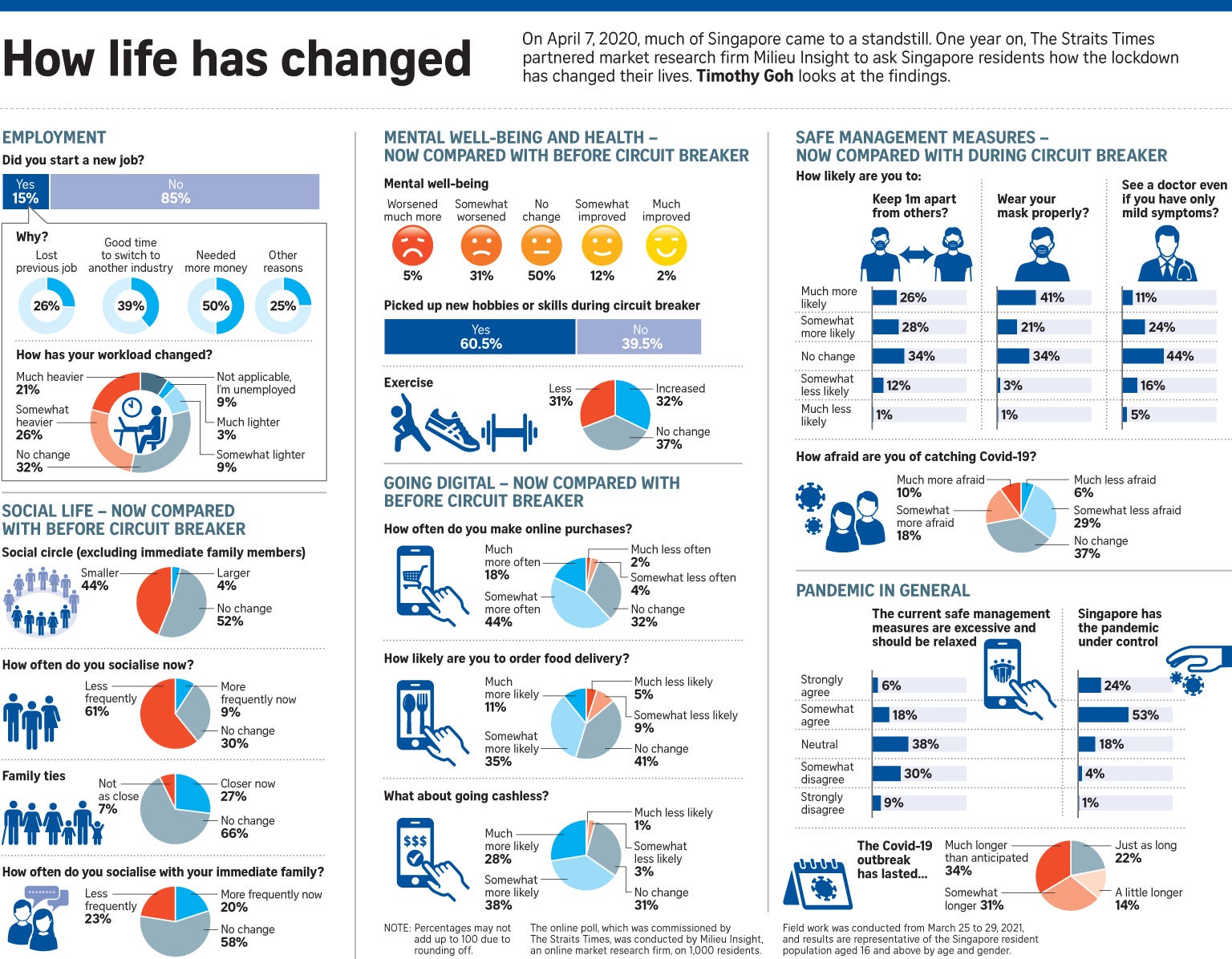