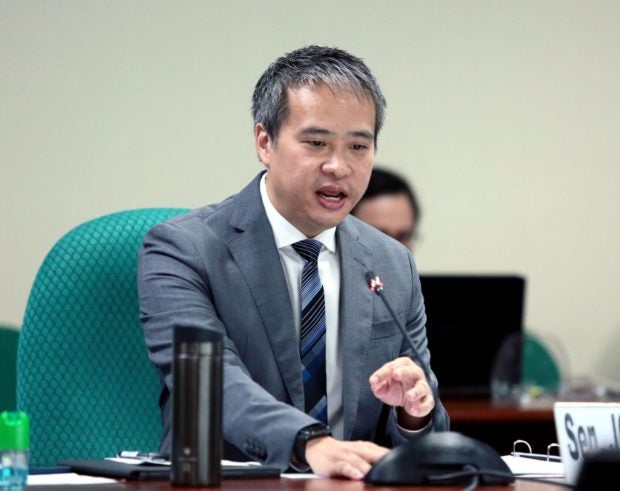 MANILA, Philippines – While he said he is open to tackling the proposed Bayanihan 3, Senator Joel Villanueva stressed that “executive action” remains the main solution against the COVID-19 crisis.

“I will support a discussion on Bayanihan 3. But having said that, let me be clear on where I stand on the mess engulfing us: Legislation is not the main solution, executive action is,” Villanueva, chairman of the Senate committee on labor, said in a statement.

The senator issued the statement following calls that the proposed Bayanihan 3 be declared as an “urgent legislation” to curb the present surge of COVID-19 cases and help reduce the plight of workers and businesses affected by quarantine restrictions.

(In case a special session is called, we are ready to support it for the sake of our workers who have lost their jobs and for the families who have nothing to eat.)

Several Bayanihan 3 bills have been filed both in the House of Representatives and the Senate.

But Villanueva said the “main cures” to COVID-19 and its “deadly” effect on lives and livelihood of Filipinos “are not waiting to be legislated, but to be implemented.”

“Case in point is the new COVID-19 Vaccination Law, a great law in need of good implementation,” he added, noting that the country has been lagging behind its neighbors in vaccinating its citizens.

Villanueva further said that the spread of the virus and the increase of the people who are being infected seems to be faster than the release of government aid.

The senator pointed to the appropriations authorized under Bayanihan to Recover as One Act, which amounts to P165.6 billion.

While this has all been released to agencies, Villanueva, citing a February report of the Department of Budget and Management to the Senate, said the amount obligated by agencies stood at a low P77.5 billion.

(Of the P77.5 billion, P38 billion or less than half was disbursed by the agencies. Why is there underspending?)

“Underspending is fatal. Budgetary savings will not save lives. Gastusin na po ang dapat gastusin para sa mga tamang bagay [Spend what needs to be spent on the right things],” he added.

Villanueva further stressed that the 2021 budget can be used as a defense against the pandemic.

(We are urging the government to be alert in implementing programs that were already funded in the 2021 national budget.) – Liezelle Soriano Roy, INQUIRER.net trainee