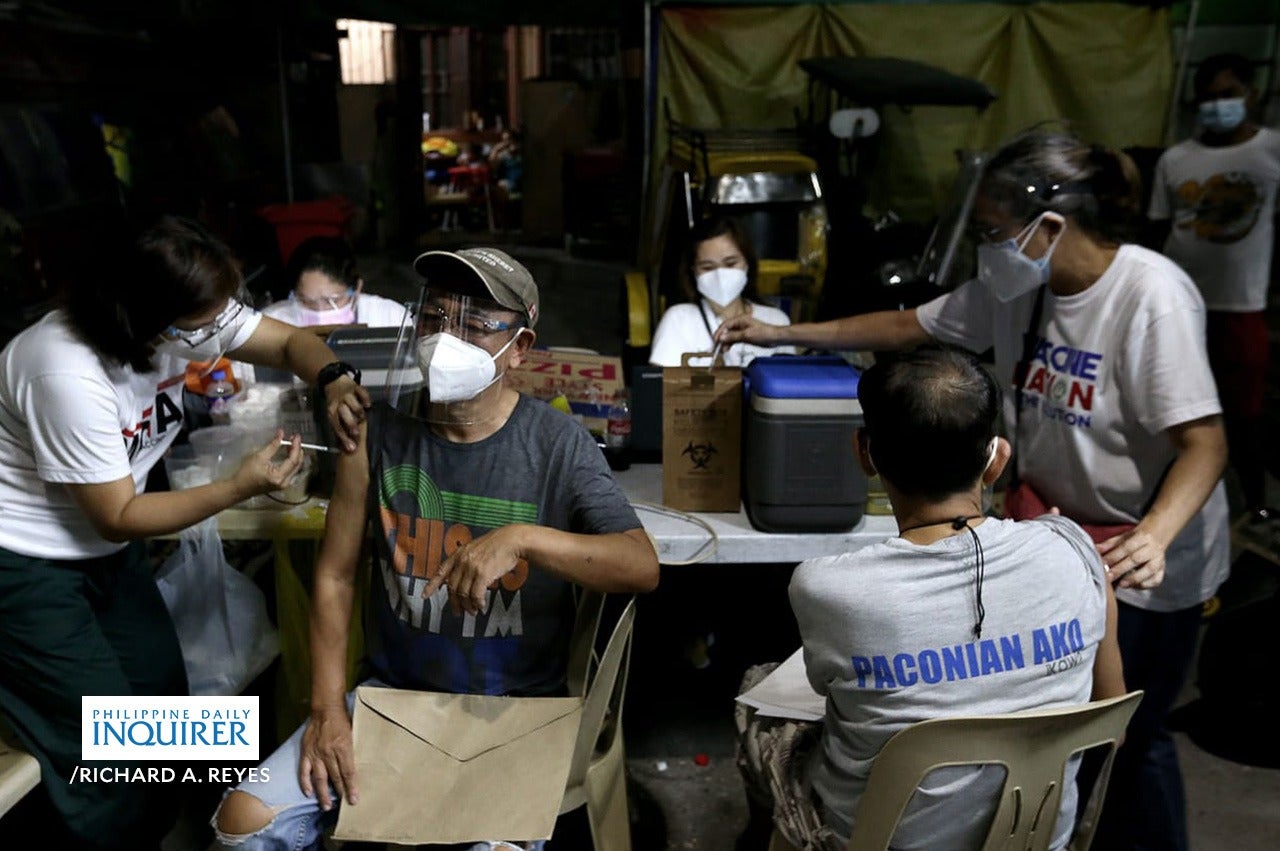 Elder residents receive the jab of Astrazeneca vaccine at Barangay 672 Zone 73 in Paco, Manila on March 28, 2021, during the start of vaccination for seniors citizens of the local government. RICHARD A. REYES / INQUIRER

MANILA, Philippines — The country’s vaccine expert panel has recommended the use of the COVID-19 vaccine developed by China-based Sinovac on the elderly.

Dr. Nina Gloriani, head of the Department of Science and Technology (DOST) vaccine development expert panel, said the Food and Drug Administration (FDA) will be releasing its decision on the matter “soon.”

(From what I know, the FDA will release an announcement on this soon. The vaccine experts have already recommended its use for senior citizens.)

(FDA Director-General Eric Domingo is just consolidating some data and I think he will eventually announce it. I talked to him earlier.)

When an emergency use authorization was issued to Sinovac’s CoronaVac vaccine last February, the FDA recommended against administering it on senior citizens due to a lack of concrete studies.

But the vaccine expert panel made the recommendation in light of the shortage of AstraZeneca vaccine doses in the country and delays in the delivery of more doses.

The government has been administering AstraZeneca’s jab to the elderly in the vaccination rollout.

(We’ve evaluated it before, we looked at the safety profile, we’re talking about the seniors. It has a good safety profile. The signs and symptoms are mild to moderate, this is based on the study in Brazil, although only around 400 seniors participated.)

She added that a similar study was conducted in China, where the 422 seniors who participated also only experienced mild to moderate side effects.

These side effects include pain in the injected arm as well as headaches lasting for about two days, according to Gloriani.

(What was the main issue before was the efficacy because the number of participants were not that many, but what’s good about the data that we saw is that the vaccine can provide protection to the elderly, they will be protected from getting severe COVID.)

She noted that China and Indonesia have already started administering Sinovac’s vaccine to their older population.

Gloriani, 67, said she herself has already been vaccinated with Sinovac’s vaccine after signing a waiver.

(I’m a senior citizen. I’m 67. I’ve had my Sinovac vaccine one month ago, I already received my two doses. Senior citizens will have to sign a waiver.)

(I do not know if the FDA may remove that because we’re in a pandemic right now and we can’t delay the vaccination just because the vaccine doses we are waiting for have yet to arrive.)

According to Gloriani, she only felt pain in her injected arm, which she noted did not last for a long time.

“Other than that wala naman po akong naramdaman [Aside from that, I don’t feel anything else],” she said.