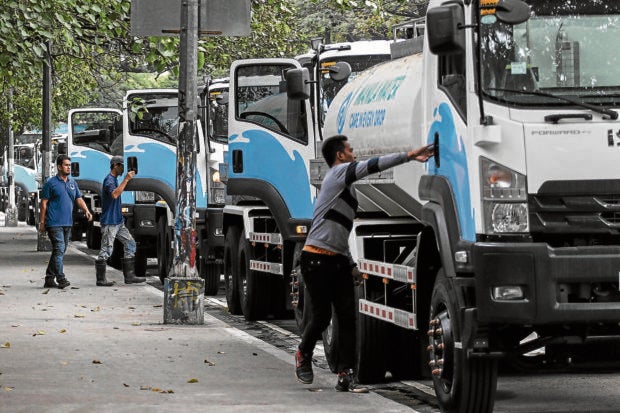 CHEAPER WATER Households and businesses in the concession area of Manila Water are expected to benefit from lower rates due to a revised deal with the government.—INQUIRER FILE PHOTO

MANILA, Philippines — Manila Water Co. Inc. has reached an agreement with the Metropolitan Waterworks and Sewerage System (MWSS) that will allow it to retain its East Zone concession until 2037, but under revised terms that Malacañang said were meant to protect the interests of consumers and the government.

Under the new deal, Manila Water is prohibited from increasing its rates until Dec. 31, 2022, in order to help consumers reeling from the economic impact of the COVID-19 pandemic and also to contribute to the nation’s recovery from the recession.

At the same time, the so-called “non-interference” clause has been removed from the revised agreement. This means the government is no longer barred from getting involved in Manila Water’s contracts and in obligations that it will assume during the life of the concession deal. In the past, the government had been sued by concessionaires for meddling, especially in the setting of water rates.

Manila Water is also not allowed to recover from its customers its corporate income tax expenses that in the past had added to the monthly bills.

The new contract also removes the Foreign Currency Differential Adjustment, which will now protect consumers from rate increases due to foreign exchange movements. Previously, the depreciation in the value of the peso against the dollar increased the cost of repaying Manila Water’s foreign obligations, which was then charged to its customers.

Another provision that will lessen the impact of rate adjustments on consumers is that Manila Water will be limited to a 12-percent fixed nominal discount rate, a technical term used to determine a company’s future profit. In the past, this was computed based on market variables such as interest rates or cost of money such that the resulting number was way higher than 12 percent.

Presidential spokesperson Harry Roque said another key provision of the revised agreement was the recognition of Manila Water as a public utility, which would make it more accountable to the government and the public.

“When you are a public utility, this is a privilege and not a right,” he said.

Justice Secretary Menardo Guevarra, who led the review of the concession agreements, said the new deal also has a provision on the waiver of claims and a deed of settlement signed by both parties.

As for criminal liability, this would need to be further studied and a complaint has to be filed first with the Department of Justice or the Office of the Ombudsman.

“Right now, we have not heard of any party who has filed or is attempting or thinking of filing something like that with the Office of the Ombudsman or with the Department of Justice,” Guevarra said.

In a disclosure to the Philippine Stock Exchange, the Ayala subsidiary said it signed the revised concession agreement with MWSS last week.

The deal followed the threat from President Duterte to rescind a 15-year extension given during the Arroyo administration of Manila Water’s concession beyond the 2022 expiration of the original contract.

Manila Water said the provisions of the revised contract were largely similar to those of the joint venture agreement signed in 2018 between the Bases Conversion and Development Authority and a consortium led by the Villar group’s PrimeWater Infrastructure Corp. for the New Clark City development in Pampanga province.

“A copy of the revised [agreement] will be uploaded in the Manila Water website as reference so that interested parties may review all other amendments not detailed in this disclosure,” the company said.

The government will next negotiate a new contract with Maynilad.