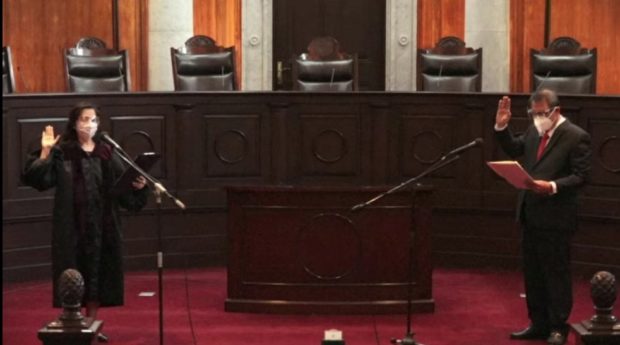 Gesmundo is the fourth most senior justice of the Supreme Court. He is one of five magistrates automatically nominated for the Chief Justice position that was vacated upon the early retirement of Chief Justice Diosdado Peralta last March 27.

This is the second time that President Rodrigo Duterte has bypassed the most senior magistrate. The first was when he appointed Associate Justice Lucas Bersamin instead of then Senior Associate Justice Antonio Carpio.

Who is Justice Gesmundo?

Gesmundo started his career in the government at the Office of the Solicitor General (OSG) in 1985. There, he was awarded the “Most Outstanding Solicitor.” From OSG, he moved to the Presidential Commission on Good Government. Then in 2015, he was appointed Associate Justice of the Sandiganbayan.

His appointment to the Supreme Court came in 2017.

Gesmundo graduated from the Ateneo De Manila University in 1984 and passed the Bar in 1985.

Gesmundo was among those who affirmed the validity of Senator Leila De Lima’s arrest. He also favored the three-time extension of martial law in Mindanao.

Gesmundo was likewise among eight justices who voted for the ouster of Chief Justice Maria Lourdes Sereno via a quo warranto proceeding and concurred with the majority which declared as constitutional the closure of Boracay in 2018.

In the latest rulings of the high court, Gesmundo voted for the dismissal of a petition seeking for the public disclosure of Duterte’s health condition and favored the dismissal of the election protest against Vice President Leni Robredo.

Gesmundo was also the ponente of the decision rejecting the petition against the Bayanihan Law.

During his interview with the Judicial and Bar Council, Gesmundo was asked about topics on leadership, killings of lawyers and judges, search warrants, and statements of assets, liabilities and net worth (SALN), among others.

Here are some of his responses.

The new chief justice who has been active in introducing and crafting amendments to court rules said: “The Constitution says no search warrant or warrant of arrest shall be issued except upon probable cause determined by a judge after conducting a searching inquiry. He cannot solely rely on the affidavits of the complainants and the witnesses they produced because that is a violation of the Constitution as well as the Rules on Criminal Procedure.”

On making public the SALN:

Gesmundo said “transparency is the rule. I don’t think there should be any objection on that.”

He said people can have access to a justice’s SALN. However, he pointed out that the purpose for obtaining the SALN should also be considered. “It must be legitimate.”

On killings of lawyers and judges:

He said they can talk with law enforcement authorities and “require that they give us specifics on the extent of investigations that have been conducted as regards to killings.”

He said he will also talk with lawyers organizations including the Integrated Bar of the Philippines” to address the matter.

Gesmundo will serve as Chief Justice until November 2026.