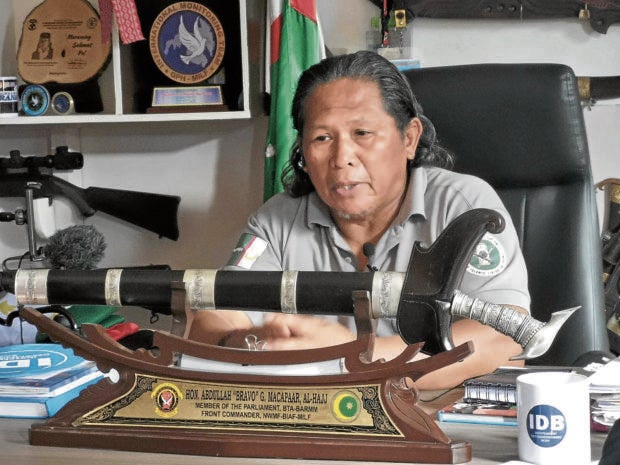 TOUGH TRANSITION Abdullah Macapaar, aka Commander Bravo, admits being a parliamentarian is more difficult than being a guerrilla. —CONTRIBUTED/ OFFICE OF MACAPAAR

But with the business savvy of a Maranao, Bravo has begun seeking funds from politicians and businessmen to build a madrassa, buildings for elementary, high school and university, dormitories, a health clinic, housing and jobs for his troops and civilians.

And always, there was his parade ground—with an amphitheater and terraced seats like that of the Roman coliseum.

These projects—a solar dryer for corn and palay, a livelihood training center with accommodation, 400- and 300-meter concrete roads, a water system and a health clinic—received grants from the MTF-RDP, supported by the European Union, Australia, New Zealand, the United States, Canada, Sweden and Spain. Begun in 2005, the projects, worth $19 million, were to be completed by the end of March.

The MTF-RDP initiative was part of the 2014 Comprehensive Agreement on the Bangsamoro (CAB), which led to the formation in January 2019 of the Bangsamoro Autonomous Region in Muslim Mindanao (BARMM), in place of the old ARMM.

Commander Bravo returned to Camp Bilal in 2015 and began his plan to build a modern community out of the forest.

“This was where my father hid me,” said the son of a Maranao sultan, recalling the bloody land-grabbing wars waged by the Moro-led Baracudas and the paramilitary Ilagas.

Bravo, 68, speaking in Maranao and Filipino, his unruly curly hair streaked with gray flowing to his shoulder, was interviewed in his three-room wooden house in the outskirts of Iligan City.

On his return, he took over from his late brother, Commander James Bond, the MILF’s northwestern command. He imposed Islamic discipline, declaring a war on drugs, which he said antedated President Rodrigo Duterte’s bloody campaign. In a video shown on TV networks, Bravo is shown directing the firing squad execution of three men purportedly convicted of murder.

In 2008, Bravo went on a rampage after the Supreme Court nullified an arrangement on a Bangsamoro Juridical Entity that included lands of the ancestral domain. The decision torpedoed the signing of a peace agreement, a product of 11 years of negotiations. In the ensuing violence, 400,000 people fled their homes.

After the 2014 peace agreement, Bravo devoted his energies into transforming his community.

He asked Sen. Juan Miguel Zubiri to donate P5 million to buy a backhoe, which he secured at a bargain from a Chinese admirer.

An American businessman from Bukidnon has agreed to help cultivate a 20-hectare abaca plantation and develop 1,000 hectares of the fast-growing Brazilian Falcata trees used to manufacture plywood and paper.

Bravo was named to the Bangsamoro Transition Authority, formed in January 2019 as an interim regional government with executive and legislative powers.

Being a parliamentarian is so much more difficult than being a guerrilla, he rued. Muslims and Christians come to his office to seek help and jobs. “Before I used to ask for food, now I am being asked for food,” he said.

On the floor, he denounces allegations of corruption. He said he remained poor, unlike colleagues who have built stone houses with marble tiles and acquired fancy cars.

When in Manila, Bravo, used to the hard ground on his back in the bush, sleeps on the floor of luxury hotel rooms. He was once found there on the mat, during a visit by actor Robin Padilla, who has offered to turn his life into a blockbuster TV series.

At the Malacañang palace banquets, he could not eat, thinking of his starving constituents in Mindanao. “My conscience bothers me,” he said.

“God allowed me to live this long, maybe so I can be a servant of the people,” Bravo said.