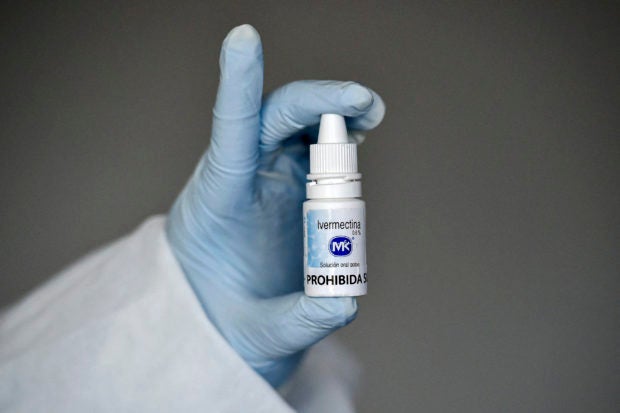 TO USE OR NOT TO USE A number of physicians swear by the effectiveness of ivermectin, an antiparasitic drug commercially available only for veterinary use, as a treatment or preventive medicine against COVID-19. But the Food and Drug Administration maintains there are procedures to be followed, including clinical trials, before the drug could be allowed for distribution. —AFP

MANILA, Philippines — There’s a raging debate among Filipino medical practitioners on the use of ivermectin, an antiparasitic drug commercially available only in veterinary grade in the country, as treatment and as prophylactic (preventive medicine) for COVID-19.

Pharmaceutical grade (USP grade) ivermectin that is safe for humans used to be available here until the manufacturer’s certificate for product registration lapsed.

A number of physicians swear by the efficacy of ivermectin and say the government should make it available to give COVID-19 patients unable to gain entry to overcrowded hospitals “a fighting chance to survive.”

He said the FDA had already met with medical practitioners urging the agency to allow the use of ivermectin for COVID-19 treatment. Domingo cited procedures to be followed, including clinical trials and applications for these trials, before it could be allowed for distribution.

At the same hearing, World Health Organization representative to the Philippines Rabindra Abeyasinghe said available data “is not strong enough” to advocate the use of ivermectin for COVID-19 treatment and prevention.

The Philippine Medical Association (PMA), in a memorandum dated March 27, reminded all members and component societies of the PMA code of ethics, adding that “prescribing unregistered medicines to patients will constitute an unethical act.”

Around that time, Health Undersecretary Maria Rosario Vergeire read a joint statement signed by representatives of the FDA, the University of the Philippines-National Institutes of Health, and several private medical groups that called attention to a “systematic review of six randomized” scientific studies showing that the use of ivermectin to treat COVID-19 neither reduced mortality risk nor improved “other clinically important outcomes.”

Still, there are doctors in the country who have taken a contrary position.

Dr. Rafael Castillo, a specialist in cardiology and internal medicine, said in an interview that he recommends ivermectin to patients as preventive medicine and prescribes it in varying doses to COVID-19 patients depending on the severity of the case.

Castillo, who writes a weekly health column for the Inquirer, noted that ivermectin remains listed in the Philippine National Drug Formulary as an “essential drug,” albeit for another indication.

“The government, through the Department of Health (DOH), is obligated to make essential drugs available …We’re not asking that the DOH or FDA … endorse the use of ivermectin. We’re just asking them to make the drug available, to give countless COVID-19 patients who can no longer be accommodated in the hospitals a fighting chance to survive,” he said.

Castillo also cited records showing that ivermectin has been “deemed safe for humans for over 40 years, … with around 3.5 million doses administered.”

At an online forum hosted by the Philippine-American Academy of Science and Engineering (Paase) on March 31, Agbayani said the country is facing an emergency situation that should give consideration to ivermectin use.

Ivermectin’s inclusion in the national formulary’s list of essential drugs would also support the effort to repurpose it as anti-COVID treatment, he said.

In the United States, Japan

“Early treatment is more successful,” Agbayani said. “I am not in the business of recommendation. I look at these things, I perceive the data. I suppose it’s my right as a physician. I show my patients the studies I’ve read. The patient may or may not want to take the medication I offer them.”

Given the lack of clinical trials in the country, Filipino doctors with reservations about ivermectin refer to a statement of the USFDA on March 5 warning against its use in treating COVID-19.

The USFDA said ivermectin is not an antiviral drug and that it has not approved ivermectin use in treating or preventing COVID-19 in humans. But it noted without elaborating that “some initial research is underway” for the use of ivermectin to treat COVID-19.

The official website of the US National Institutes of Health took note of the USFDA’s warning. In a statement released on Feb. 11, it said there is “insufficient data” that can be used as basis “to recommend either for or against” the use of ivermectin.

It added: “Results from adequately powered, well-designed and well-conducted clinical trials are needed to provide more specific, evidence-based guidance on the role ivermectin in the treatment of COVID-19.”

Not a novel idea

Repurposing ivermectin to treat COVID-19 is not a novel idea. Microbiologist Dr. Satoshi Omura, the 2015 Nobel laureate for medicine who discovered the use of bacterial ivermectin for river blindness and elephantiasis, told Nikkei Asia in an interview in April 2020 that ivermectin “appears effective in treating COVID-19 patients.”

In January, Nikkei Asia said the Tokyo Metropolitan Government “plans to conduct clinical trials of … ivermectin” at metropolitan and public hospitals in the city.

Kitasato University Hospital began clinical trials of ivermectin in September 2020. The hospital said it will administer the drug to 240 patients by the end of March 2021 “to see if it shortens the time required for patients to test negative in polymerase reaction tests,” Nikkei Asia reported.

The lack of clinical trials as required by the Philippine FDA was discussed in the Paase forum.Dr. Jacinto Blas Mantaring III, chair of the Department of Clinical Epidemiology of the UP College of Medicine, said doctors and researchers cannot make conclusions about a drug’s efficacy based on the experience of one patient who received ivermectin.

“Describing the outcome of a single person is called a case report,” he said. “You cannot make a conclusion for a population based on the results of just one person. But it encourages other researchers to report their experience, perhaps to contribute to the body of knowledge regarding [its] effects.”

Various factors, such as a patient’s immunology, general health, genetics, dosage given and the virulence of the virus “especially now that there are several strains” should also be considered, Mantaring said.

Castillo said in a recent column that “admittedly, the studies [on ivermectin] are low to moderate in quality, because practically all of them were self-funded; no big pharma or international agencies would fund these studies before.”

“But it cannot also be simply dismissed that there’s a strong suggestion of benefit to the tune of around 70-83 percent reduction in deaths, and a vaccine-like efficacy of around 90 percent in preventing disease transmission,” he wrote.

Dr. Dominga “Minguita” Padilla, founder of the private COVID-testing initiative Project ARK, warned that use of “unproven remedies can drive mutations and lead to more variants that are more infectious. We now have P.3, or the Philippine variant, aside from the Brazilian, UK and South African variants.”

But more than the firestorm over ivermectin, Padilla said the health sector should not lose sight of the urgent issue of nationwide vaccine rollout and a more immediate government response to the pandemic.

“I think the hype is being orchestrated so that we will forget the corruption and incompetence in government … This rumble is a symptom of fear, confusion and frustration. If we had adequate vaccines sooner, then people would not have to cling to other things,” she said.