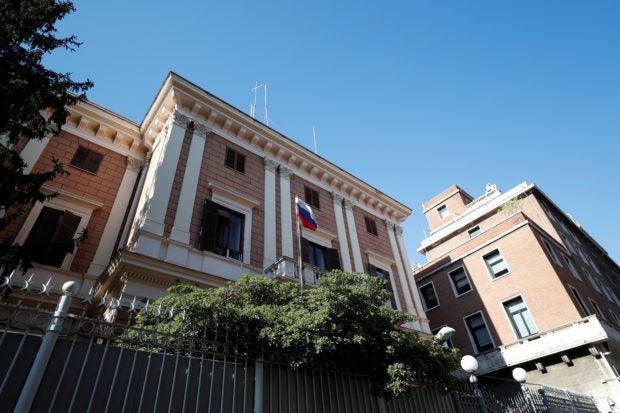 General view of the Russian Embassy after a Russian army official, who is accredited with the embassy, and an Italian navy captain were arrested on suspicion of spying, in Rome, Italy, March 31, 2021. REUTERS/Guglielmo Mangiapane

ROME — Italian police have found a stash of classified and highly classified military documents they believe an Italian navy captain gave to a Russian official in return for cash, a judicial source said on Friday.

Walter Biot, 54, was arrested on Tuesday in a Rome car park. A police source said he had been seen handing information to a Russian military attache in exchange for 5,000 euros ($5,900).

Biot’s lawyer Roberto De Vita told an Italian newspaper that his client had told him that he had handed over information to Russia for money, but denied having leaked classified documents.

Biot appeared in court for the first time on Thursday but declined to speak. “He asked for time to collect his thoughts,” De Vita told reporters.

Interviewed later by Corriere della Sera newspaper, De Vita said that Biot had told him he was not ideologically driven and had never handed over “documents which could put Italy or other countries at risk.”

Italy, which has traditionally enjoyed better relations with Moscow than many other Western states, has expelled two Russian diplomats in retaliation and denounced the alleged espionage as a “hostile act.”

The Russian foreign ministry was quoted as saying on Wednesday that it regretted the expulsions, but that they did not threaten bilateral relations.

Biot’s lawyer said his client had four children, one of whom was seriously ill and needed special care.

“‘I have made a mistake, but I did it for my family. I had a moment of great weakness and fragility. I was involved in a mechanism that was bigger than me. I had a debt that I could not repay’,” De Vita quoted him as saying.

De Vita did not immediately respond to a request by Reuters for further comment.

Biot is being held in a Rome jail and has been denied house arrest. He faces a minimum 15 years in prison if found guilty of military espionage.

Biot’s wife, Claudia Carbonara, told Corriere della Sera that the family was struggling to get by on his salary of 3,000 euros a month, with expenses including 1,200 euros a month on their mortgage.

“He is not stupid or irresponsible. He was just desperate,” she was quoted as saying. Contacted by Reuters, Carbonara declined to comment.

Biot has the rank of a frigate captain and had a desk job since 2010. He was currently working at the defense ministry department tasked with developing a national security policy.

The Russian official who was seized on Tuesday left Rome on Thursday along with an embassy colleague, a diplomatic source said. Both men worked in the military attache’s office at the Rome embassy.

The Italian media named them Dmitry Ostroukhov and Alexei Nemudrov. Russian authorities have not released their names.