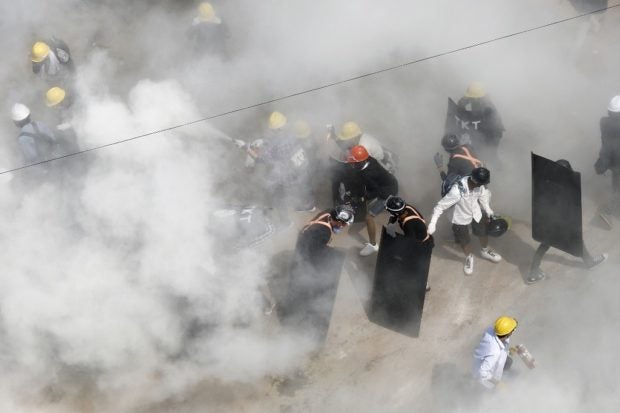 FILE POHOT: Protesters react as they are engulfed by tear gas fired by police, and as other demonstrators let off fire extinguishers, during a demonstration against the military coup in Yangon on March 6, 2021. (Photo by STR / AFP)

United Nations, United States — The UN Security Council on Thursday “strongly condemned” the deaths of hundreds of civilians in Myanmar, in a unanimous statement watered down by China after two days of tough negotiations.

“Members of the Security Council expressed deep concern at the rapidly deteriorating situation and strongly condemned the use of violence against peaceful protestors and the deaths of hundreds of civilians, including women and children,” read the statement, initiated by former colonial power Britain.

In earlier versions of the text, obtained by AFP, Western nations wanted to include a “readiness to consider further steps” — a reference to the possibility of international sanctions.

Beijing also insisted on softening a reference to the “killing” of hundreds of civilians and changing it to civilian “deaths.”

Still, despite the lengthy negotiations, getting the Security Council to speak with one voice sent a “very important signal,” one ambassador said on condition of anonymity.

Since the February 1 coup, the Security Council has issued three unanimous statements on Myanmar.

But Beijing, which has never recognized the existence of a coup, reduced the scope of the negotiated texts each time.

Moreover, the Security Council’s positions have had little effect on the military so far.

On Wednesday, the UN’s special envoy on Myanmar called for strong actions against the junta and warned of a possible “bloodbath” and the risk of civil war.

Read Next
German experts say under 60s should not get second AstraZeneca shot
EDITORS' PICK
As vaccine injection rate rises in PH, questions linger on how long it would take to reach herd immunity
Re-imagining EdTech and the classroom in a post-pandemic era
A Spanish Celebracion with Crimson Mactan’s ‘Enye at Home’
CopperMask Philippines shows support for Miss Universe Philippines 2020 Rabiya Mateo
Palace doesn’t see tension in WPS, only Duterte haters incite it
Retired military, police execs call for unity vs China aggression
MOST READ
Mexico wins Miss Universe title but Myanmar steals show
Pangilinan on China’s threat if PH digs oil in WPS: Why should we be scared?
‘Check your facts:’ Trillanes disputes Enrile claims on 2012 back-channel talks with China
Retired military, police execs call for unity vs China aggression
Don't miss out on the latest news and information.