MANILA, Philippines—The Bureau of Corrections (BuCor) has turned down the request of human rights group Kapatid to allow for the distribution of food and health care provisions to inmates or persons deprived of liberty.

In a letter dated March 31, CCSupt. Victor Erick L. Pascua, head of the Directorate for Security Operations said their decision to suspend the “Paabot” in the Medium Security Compound complies with the guidelines of the Inter-Agency Task Force (IATF) on Emerging Infectious Diseases that impose “stringent limitations on movement and transportation of people.”

“Further, it expresses Community Quarantine as restriction of movement within, into, or out of the area of quarantine of individuals, large groups of people, or communities, designed to reduce the likelihood of transmission of an infectious disease among persons in and to persons outside the affected area,” read Pascua’s response to Kapatid’s request. 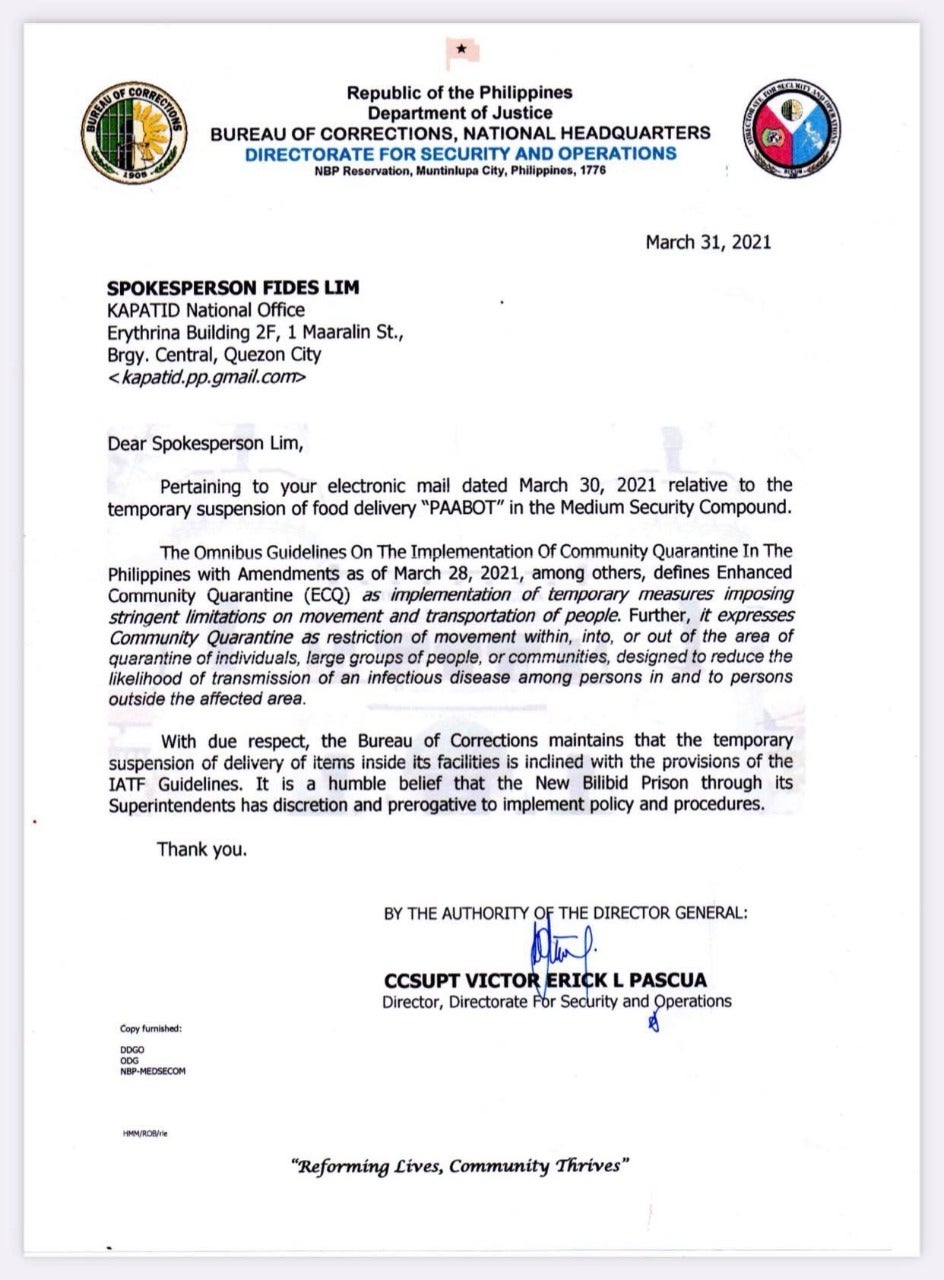 “With due respect, the BuCor maintains that the temporary suspension of delivery of items inside its facilities is inclined with the provisions of the IATF Guidelines. It is a humble belief that the New Bilibid Prison through its Superintendents has discretion and prerogative to implement policy procedures,” he added.

Kapatid has sent another letter to BuCor, asking that the decision be reconsidered, citing the case of political prisoner Jesus Alegre, 75, a farmer from Sagay, Negros Occidental, who has been held in the Maximum Security Compound for 16 years.

“Jesus Alegre is still very sick even after confinement at the NBP infirmary and check-ups at the Ospital ng Muntinlupa. The medicines we bought for him are good only for one month. His condition requires unhindered delivery of his medicines together with his small monthly cash allowance and nutritious food for his recovery,” Fides Lim, Kapatid Spokesperson said.

Kapatid has sent a similar request to the Bureau of Jail Management and Penology (BJMP).

“Physical visitation is temporarily suspended. What we allow now is the E-Dalaw and through telephone,” Solda said in Filipino. E-Dalaw is done virtually where the detainees and their relatives can have a face-to-face interaction online.

But Solda said they might allow the delivery of maintenance medicines and special diets for inmates with medical conditions but subject to the usual health and security protocols.

“Our priority is to ensure the health and safety of our personnel and our detainees,” he said.