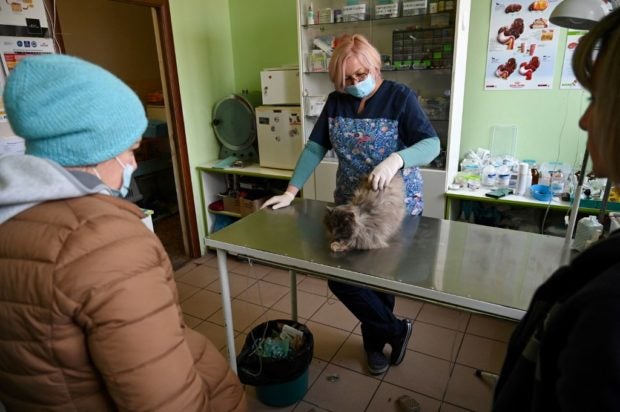 Veterinarian Galyna Lekunova, 47, examines a cat at her clinic in the Azov Sea port of Mariupol on March 12, 2021. With a large Russian-speaking minority concentrated in the east and the south, Ukraine passed a law “on ensuring the functioning of the Ukrainian language as the state language” in 2019. Photo by SERGEY VOLSKIY / AFP

MARIUPOL, Ukraine — Galyna Lekunova, a veterinarian in the eastern Ukrainian city of Mariupol, was left fuming by a new law in January mandating the use of Ukrainian in the service industry.

In protest against the regulations that she said amounted to “discrimination,” the 47-year-old began offering 50-percent discounts to her Russian-speaking clients.

This is what she believes spurred the perpetrators of a graffiti attack on her clinic, which was defaced in late January with scrawls of black coffins and a warning of “Death to the enemies”.

One month later, the paint was still visible on a poster of a puppy advertising her services in Russian in the industrial port city on the Black Sea.

“If I work, pay my employees’ salaries and my taxes, it’s none of your damn business which language I do it in,” Lekunova, wearing a floral-patterned apron, told AFP.

The incident in Mariupol, some 20 kilometers (12 miles) from the front line of Ukraine’s war with separatists backed by Moscow, reflects a deeply-felt language divide in the ex-Soviet country of 40 million people.

Lawmakers in 2019 passed legislation to cement Ukrainian as the country’s primary language, ordering middle schools that taught in Russian and other minority languages to make the switch and mandating Ukrainian versions of online stores.

An article of the laws that entered into force in January goes further, obliging shops, restaurants and the service industry to engage customers in Ukrainian unless clients specifically ask to switch.

Anyone caught violating the new legislation twice within one year could be fined 200 euros ($235), almost half of the average salary in the country. No one has been penalized so far.

Officials in Kiev say the initiative aims to revitalize a national language that was subjugated first during the Russian Empire and then in Soviet times.

Moscow, which routinely accuses Kiev of perpetuating “Russophobia” and stalling peace efforts in the east, condemned the language laws in January.

The foreign ministry said Kiev was instilling an “atmosphere of resentment and fear” and destroying the country’s “unique multicultural space”.

But for Kiev, the new laws are part of a broader push to shore up its own national identity that started after the Soviet collapse.

It was an initiative that gained momentum after 2014, when Moscow annexed the Crimean peninsula and backed separatists in the east, justifying its intervention by citing the need to protect Russian speakers.

The legislation has found favor with some 62 percent of Ukrainians — most of whom are bilingual — according to a recent poll, with 34 percent against.

“This law will encourage a more active use of Ukrainian language and that is what we need,” said Sergiy Gusovsky, the owner of four prominent restaurants in Ukraine’s capital.

“It’s a natural process after 2014. Kiev was very ‘Russified’, so there’s an element of overcoming a historical obstacle,” he told AFP.

But Gusovsky said the shift should be “gentle”.

“Any approach that isn’t careful will spark a backlash.”

Between checkups with household pets, Lekunova, in Mariupol, said, however, that if fines were imposed she would consider moving to Russia.

The new laws are also exposing divisions within government.

But Ukraine’s Commissioner for the Protection of the State Language, Taras Kremin, countered that “the service sector already had a year and a half to prepare” before laws entered into force.

But he also noted that there had not yet been repeat complaints and that issues reported so far had been resolved without conflict.

For Oleksiy Danilov, secretary of the National Security and Defense Council, the solution is prioritizing another language.

“Our youth’s proficiency in English is a guarantee of our country’s independence,” he said at a recent conference.