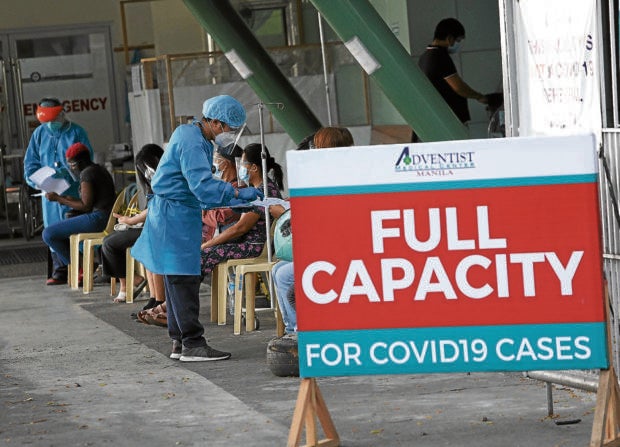 MANILA, Philippines — Public and private hospitals in Calabarzon (Cavite, Laguna, Batangas, Rizal, Quezon) are running at critical or near capacity, as the region takes on spillover COVID-19 cases from Metro Manila while tackling a surge of its own.

Overrun hospitals in Metro Manila are crying for reinforcements, with Dr. Jaime Almora, president of the Philippine Hospital Association, saying in a television interview on Wednesday that the fight against COVID-19 had been lost.

The DOH would soon put up tents outside the hospitals for patients waiting for admission into the emergency rooms or intensive care units, and convert the Southern Tagalog Regional Hospital in Bacoor City, Cavite, to exclusively handle COVID-19 cases.

“These are proposals (to open tents) but where do we get the staff to man [these] expansions,” said Dr. Jose de Grano, president of the Private Hospitals Association of the Philippines Inc. who lives in Lipa City, Batangas.

“In Lipa, five big hospitals are full already,” he said.

In its March 29 report, the regional DOH office in Calabarzon said COVID-19 bed use was 61.4 percent, while medical ventilators use was 37.7 percent. Rizal province alone had hit 73.8 percent bed use.

Of the 306 temporary treatment and monitoring centers, 22 percent were fully occupied with mild cases, many of these in Laguna.

Robert Mendoza of the Alliance of Health Workers said hospital employees were “mentally and physically exhausted and demoralized.” Supplies of protective suits and medicines has started to run low he said.

In an online forum by the Solidarity of Health Advocates and Personnel for a Unified Plan to Defeat COVID-19, Mendoza described how hospital directors nearly cried at a Congress hearing saying they could no longer take in anymore patients unless “another patient gets discharged.”

Mendoza said 10-50 patients were on the waitlist at emergency rooms in several big hospitals in Metro Manila. At the East Avenue Medical Center, 527 health workers have contracted the virus, “five of them [have] already died,” he said.

To ease the congestion, the DOH has reopened two isolation centers that it closed when cases went down last year.

In an online news briefing, Health Undersecretary Maria Rosario Vergeire said the field hospital in Quezon Institute, with 112 beds, would be reopened by Monday to handle recovering patients to decongest hospitals.

Earlier this month, Rizal Memorial Coliseum, with 27 beds, and Ninoy Aquino Stadium, with 127 beds, were reopened to handle recovering patients.

Antigen tests detect the presence of a specific viral antigen, which implies infection, and are generall quicker that the RT-PCR test, which the DOH still considers the gold standard in coronavirus testing.

Vergeire said the antigen test kits would be used during contact tracing.

On Wednesday, the DOH recorded 6,128 new coronavirus infections, pushing the number of confirmed COVID-19 cases in the country to 747,288 overall.

Elsewhere in Luzon, hospitals were surviving on donations from private citizens, business companies, and nongovernmental organizations while waiting for supplies from the DOH.

In Pangasinan, Region I Medical Center in Dagupan City has received personal protective equipment and other supplies from the Integrated Bar of the Philippines, SM, Society of Medical Specialists in Government Service, and Immaculate Conception of Greenhills.

In Benguet province, health workers at Cordillera Hospital of the Divine Grace are making their face shields with recycled acetate sheets and protective personal equipment with used hospital sheets.