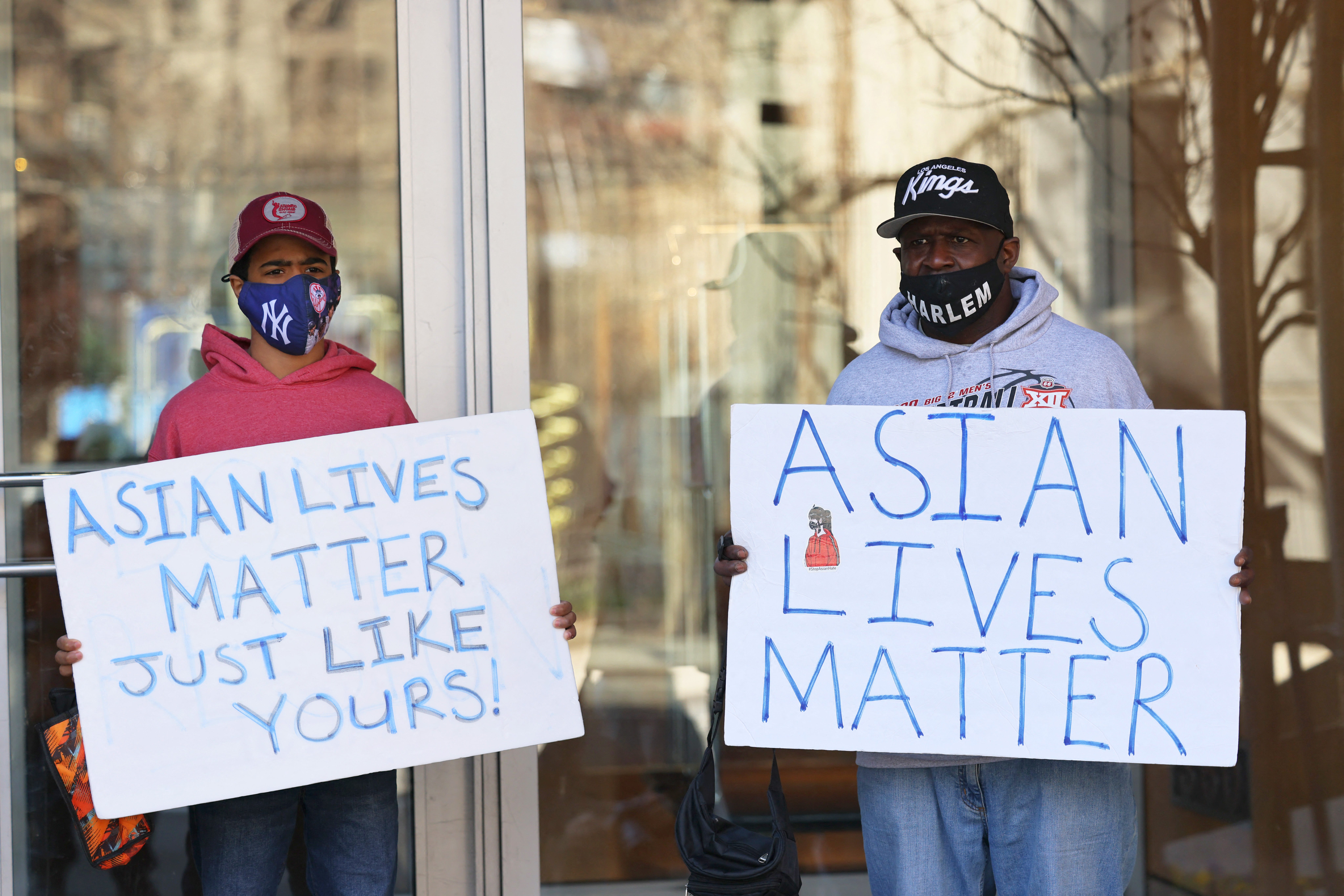 Cameron Hunt and his father Calvin Hunt stand outside the 360 W 43rd Street building with signs of support for Asian Americans in Midtown Manhattan on March 30, 2021 in New York City. (AFP)

NEW YORK — New York police were searching Tuesday for a man who violently attacked a Filipino-American woman as bystanders seemingly looked on without intervening, the latest incident of anti-Asian violence in the United States.

The attack, which took place on a sidewalk in broad daylight in Midtown Manhattan on Monday, was caught on CCTV footage from inside an adjacent building.

In the video, posted online by police, the man can be seen walking up to the 65-year-old woman and kicking her in the stomach, knocking her to the ground.

He then kicks her several times in the head before walking away.

The video also shows a man, who appears to be a delivery worker, watching the attack unfold from inside the building.

He is then joined by two other men, one of whom closes the door rather than coming to the woman’s aid as the assailant walks away.

The attacker has not been identified and police have appealed for anyone with information to come forward.

The victim, whose identity has not been released, was hospitalized with multiple injuries, including a broken pelvis.

She was in a stable condition Tuesday, police said.

In a statement, the NYPD said the attacker “made anti-Asian statements” towards the victim as he kicked her. It added that the force’s hate crime task is investigating the assault.

The same unit is still looking for another man who struck a woman in the face in a subway station on Saturday night.

The woman was not seriously injured and declined any medical assistance.

New York and other US cities have seen an upsurge in crimes against people of Asian descent since the start of the coronavirus pandemic, with activists attributing the the rise to ex-president Donald Trump’s repeated references to Covid-19 as the “Chinese virus.”

New York Governor Andrew Cuomo said the violence was becoming “an epidemic” across the country that “must stop now.”

New York City Mayor Bill de Blasio called on anyone who witnesses an attack to “literally shout” to disturb the aggressor and attract attention.

Earlier this month, six women of Asian descent were killed when a shooter attacked three Asian-owned spas in Atlanta.

The NYPD has stepped up its presence in neighborhoods with high Asian immigrant populations while volunteer groups have formed safety patrols.

Several demonstrations expressing solidarity with Asian-American communities have also taken place. They have been attended by New York mayoral candidates and the Reverend Al Sharpton, the influential Black rights activist.

New York has more than one million inhabitants of Asian descent.

In the week of March 15 to 21, police recorded a total of nine hate crimes, up from three in the same period of 2020.