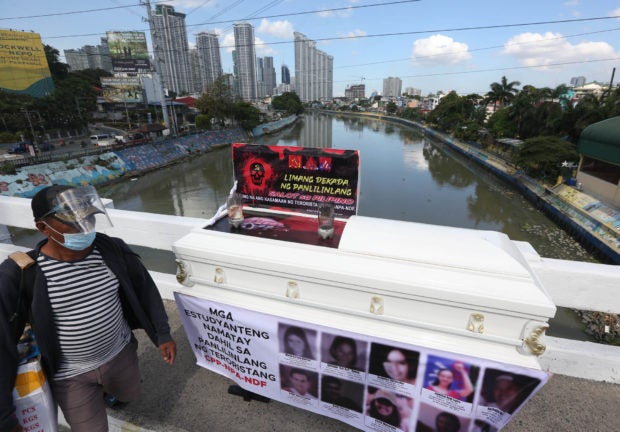 MACABRE STUNT A coffin placed in the middle of the pedestrian walkway of busy Guadalupe Bridge on Edsa greets Makati City-bound motorists on Monday. The coffin features a photograph of Communist Party of the Philippines founder Jose Maria Sison and accompanied by a streamer showing photographs of students allegedly recruited by the New People’s Army and killed in clashes with the military. Another coffin with messages condemning the communist movement was seen in Quezon City on Sunday night. —MARIANNE BERMUDEZ

MANILA, Philippines — University of the Philippines (UP) student leaders on Monday condemned attempts to smear the names of two UP student activists who had been killed in combat with military troops after coffins with streamers bearing their names and photos were displayed publicly.

The streamers also bore a message that claimed the deaths of Josephine Anne Lapira and John Carlo Alberto, along with other militant students, were due to the “deception of the terrorist groups Communist Party of the Philippines-New People’s Army-National Democratic Front of the Philippines.”

The coffins were seen at Timog-Morato Rotunda in Quezon City and on Edsa-Guadalupe Bridge in Makati City a day before the founding anniversary of the New People’s Army (NPA) and before Metro Manila and four neighboring provinces reverted to enhanced community quarantine.

The 22-year-old Lapira, a biochemistry major from UP Manila, and Alberto, a UP Los Baños undergraduate, were student leaders slain in encounters between the military and NPA rebels in 2017 and 2019, respectively.

In a joint statement, UP’s student regent—the state university’s highest student representative—and several other student leaders condemned the “nefarious desecration of the deaths of youths and misrepresentation of UP students and the advocacies they embodied.”

“While we continue to honor the sacrifices these young people made, the state sullies their memory and is reopening wounds for their friends, families and communities,” student regent Renee Co said. “Rather than make conditions better for the Filipino people, this government opts to point guns at everyone.”

Echoing Co’s sentiment, UP Diliman Student Council chair Froilan Cariaga said that the youth “needs no brainwashing from the Reds; we fight back on our own volition, spurred on by social injustice.”

“If we are to condemn a terrorist group for killing youths, no need to look further than Mr. Duterte’s military, [which has] killed hundreds of minors in their antipoor war on drugs,” he added.

Independent groups estimated that around 122 minors have been killed in the President’s brutal antidrug campaign.

While nobody has so far claimed responsibility for the display of the coffins, the UP student leaders believe that state forces are behind the latest Red-tagging of students from the university.

Anticommunist propaganda have cropped up across the metropolis lately, as the government doubles down on its crackdown against rebels and members of leftist groups.